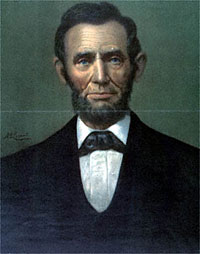 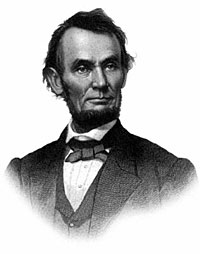 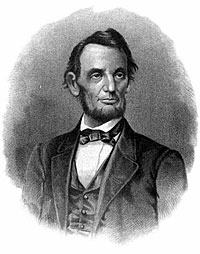 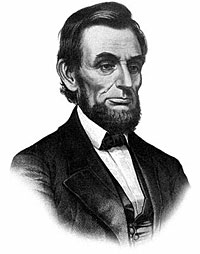 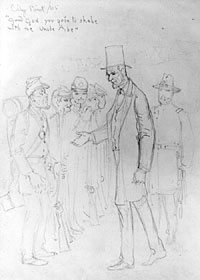 President Abraham Lincoln sometimes acted as if events and people were beyond his control. In reality, however, President Lincoln exerted extraordinary control over a country, a party, and a government, all of which often seemed to by falling apart.

William O. Stoddard, one of President Lincoln’s secretaries, noted that if President Lincoln “met a governor, a general, a foreign diplomat, a visitor of especial distinction, it was out of his power to look upon the great personage before him as other or more or less than a human being like himself or any other man so to be met and spoken to.”1 But Stoddard also noted that the President possessed the assurance of his role as the country’s “revolutionary dictator.” Stoddard wrote that Mr. Lincoln “was ready and willing to use all ‘powers given him by his unwritten commission to “See to it that the Commonwealth suffers no harm.’2 That applied to members of Congress and generals in the army. Stoddard described his management of army commanders “as a persistent effort by him to put each man, as nearly as might be, in the place for which he was best fitted and wherein he could perform the most effective service. If, having appointed any man to an especial duty, he found him insufficient for it, he was quite willing to transfer him to another.”3

“One great public mistake” about President Lincoln’s character, “is that he is considered by the people of this country as a frank, guileless, and unsophisticated man. There never was a greater mistake,” reported Illinois politician Leonard Swett, a long-time legal colleague. “Beneath a smooth surface of candor and apparent declaration of all his thoughts and feelings he exercised the most exalted tact and wisest discrimination. He handled and moved men remotely as we do pieces upon a chess-board. ‘He retained through life all the friends he ever had, and he made the wrath of his enemies to praise him. This was not by cunning or intrigue in the low acceptations of the term, but by far-seeing reason and discernment. He always told only enough of his plans and purposes to induce the belief that he had communicated all; yet he reserved enough to have communicated nothing.”4

Journalist and War Department official Charles A. Dana wrote: “During the first winter I spent in Washington in the War Department I had constant opportunities of seeing Mr. Lincoln, and of conversing with him in the cordial and unofficial manner which he always preferred. Not that there was ever any lack of dignity in the man. Even in his freest moments one always felt the presence of a will and of an intellectual power which maintained the ascendancy of his position. He never posed, or put on airs, or attempted to make any particular impression; but he was always conscious of his own ideas and purposes, even in his most unreserved moments.”5

Carl Schurz was a politician, writer and political general who was sometimes at odds with President Lincoln. In October 1864, Schurz wrote a friend: “Your opinion of the President is too deprecatory. He is indeed a man without higher education and his manners harmonize little with the European conception of the dignity of a ruler,” wrote general-diplomat Carl Schurz to . “He is an overgrown nature-child and does not understand artifices of speech and attitude. But he is a man of profound feeling, just and firm principles, and incorruptible integrity. One can always rely upon his motives, and the characteristic gift of this people, a sound common sense, is developed in him to a marvelous degree. If you should sometime find opportunity to read his official papers and his political letters you would find this demonstrated in a manner which would surprise you. I know the man from personal observation as well as anyone and better than most. I am quite familiar with the motives of his policies. I have seen him fight his way heroically through many a terrible battle and work his way with true-hearted strength through many a desperate situation. I have often criticized him severely and subsequently have not infrequently found that he was right. I also understand his weaknesses; they are the weaknesses of a good man.6

Another journalist who observed Mr. Lincoln at close hand, Noah Brooks wrote: “Nothing displeased him more than any attempt — and some fools did attempt it — at unseemly or undignified familiarity, for his nature was genuinely dignified and manly. Towards all who held appointments in his in his household he was to the last degree kind, considerate, and even indulgent; but nothing could be further out of the way than to suppose that his kindness of heart degenerated into what is vulgarly called ‘good nature.’ He was at times, when overworked or weary, even petulant — so much so as to be difficult of access; was always singularly fim in the assertion of his own fixed views or will, and if just cause of anger aroused him, his anger was apt to be hot and lasting. He never did forgive a man whom he believed to have deceived him; of all men he hated and despised a liar. his manner at receptions, and other occasions of ceremony of social or official formality, was that of a man who performs an irksome but unavoidable duty, though he was never lacking in cordial hospitality.”7

But with women and children, Mr. Lincoln’s kindness and tenderness was most evident. John M. Bullock was 15 when he met President Lincoln: “Before approaching the President I felt a natural diffidence, not to say awe, of the man who was Chief Executive of the nation, commander-in-chief of the army and navy, as well as the man who held the life of my brother in his keeping. To a boy of fifteen this feeling was only natural. The closer I approached the great man, however, the less I feared him, the higher my courage rose; and before the interview was over I was as much at my ease with President Lincoln as if talking to my own father. The reasons for this are to be found in just the qualities of heart with which he is accredited, and rightly so, by all the world. No sooner had he laid his hand upon my shoulder and said, ‘My son,’ that I felt drawn to him, and dread less and less the interview he had granted me; and each successive question he asked me put me more at my ease, until ,when I was alone with him in his private office, all my embarrassment vanished, and I saw before me the countenance of a man I could trust, one which invited confidence. And thus it was that I saw this man at the head of a great nation engaged in the most stupendous war in the history of the world.”8