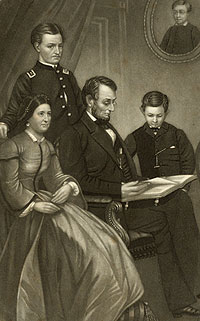 Family played an important role in the Lincoln White House. Mr. Lincoln was devoted to his wife and three sons – a fourth son had died over a decade earlier. There was a large gap between Robert, who was 17 when his father entered the White House, and the much younger Willie (10) and Tad (7). According to Elizabeth Grimsley, “Willie [was] a noble, beautiful boy of nine years, of great mental activity, unusual intelligence, wonderful memory, methodical, frank and loving, a counterpart of his father, save that he was handsome. He was entirely devoted to Taddie who was a gay, gladsome, merry, spontaneous fellow, bubbling over with innocent fun, whose laugh rang through the house, when not moved to tears. Quick in mind, and impulse, like his mother, with her naturally sunny temperament, he was the life, as also the worry of the household. There could be no greater contrast between children.”1Willie and Tad were inseparable friends so when Willie died in 1862, there was a great void in the lives of both his parents and Tad.

Mrs. Lincoln grieved. Mr. Lincoln went back to work. Robert went back to Harvard University. And Tad pretty much did as he pleased. This appalled the self-disciplined Robert on his occasional visits home. On one occasion in 1864, Robert reported how Tad “went over to the War Department to-day, and Stanton, for the fun of the thing, – putting him a peg above the ‘little corporal’ of the French Government, – commissioned him ‘lieutenant.’ On the strength of this, what does ‘Tad’ do but go off and order a quantity of muskets sent to the house! Tonight he had the audacity to discharge the guard, and he then mustered all the gardeners and servants, gave them the guns, drilled them, and put them on duty in their place. I found it out an hour ago, and thinking it a great shame, as the men had been hard at work all day, I went to father with it; but instead of punishing ‘Tad,’ as I think he ought, he evidently looks upon it as a good joke, and won’t do anything about it!”2

Many friends described Mr. Lincoln as an extraordinarily kind and indulgent parent. In an interview that Mrs. Lincoln gave to her husband’s law partner after his death, she described his attitude toward the family: “Mr. L was the kindest, most tender, and loving husband and father in the world. He gave us all unbounded liberty. Said to me always when I asked him for anything: you know what you want – go and get it. He never asked me if it was necessary. He was very, very indulgent to his children – chided or praised for it he always said, ‘It is my pleasure that my children are free, happy, and unrestrained by parental tyranny. Love is the chain whereby to lock a child to its parent.'” 3

Mrs. Lincoln loved and worried about her children. Historian Doris Kearns Goodwin wrote that Mary’s “letters are replete with gossip about their acquaintances in Washington and Springfield, detailed news of the children, some mention of Lincoln’s political activities, gentle teasing, and expressions of longing, both for companionship and, by implication, for intimacy.”4 For example in January 1864, Mary wrote to the wife of a U.S. Senator: “Please accept these simple bouquets I am happy to tell you, that my Little Boy is recovering, we have been so deeply afflicted, that the least sickness unnerves me. I will be ready to accompany you any day, to the Hospitals, when it is pleasant.”5

The treatment the Lincolns received at the hands of official Washington was not necessarily indulgent, however. Charles Francis Adams, Jr. described a dinner party he attended: “If the President caught it at dinner, his wife caught it at the reception. All manner of stories about her were flying around; she wanted to do the right thing, but not knowing how, was too weak and proud to ask; she was going to put the White House on an economical basis, and, to that end, was about to dismiss ‘the help’ as she called the servants; some of whom, it was asserted, had already left because ‘they must live with gentlefolks’; she had got hold of newspaper reporters and railroad conductors, as the best persons to go for advice and direction.”6