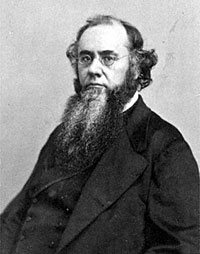 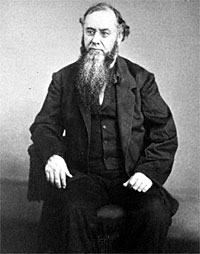 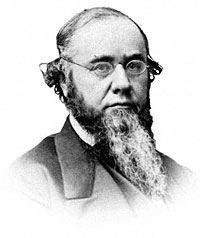 Nicknamed “Mars”, Edwin M. Stanton was a pro-Breckinridge Democrat who was Attorney General under President James Buchanan (1860-61) and Secretary of War under Abraham Lincoln and Andrew Johnson(1862-68). Stanton succeeded Simon Cameron to whom he had given legal advice (some of which helped get Cameron fired). Stanton was a sharp and abusive critic at the beginning of the war, calling Mr. Lincoln ‘the original gorilla. Only later, he became a strong supporter of President Lincoln. Six months before Stanton’s appointment to the Cabinet, he wrote former President Buchanan: “The dreadful disaster of Sunday [Battle of Bull Run] can scarcely be mentioned. The imbecility of this administration has culminated in that catastrophe, and irretrievable misfortune and national disgrace are to be added to the ruin of all peaceful pursuits and national bankruptcy as the result of Lincoln’s ‘running the machine’ for five months.”1 However, he sometimes bridled at the President’s directions and occasionally refused to obey them. At times, he conspired with Salmon Chase behind the President’s back. The President valued his tenacity and organizational abilities—if not his arrogance and duplicity, both of which Stanton had honed to virtual art forms.

“Henry Dawes of the Dawes Committee dropped in on the President after the appointment was announced to congratulate him on getting such a man as Stanton for his Cabinet, in the next breath making some remark that led Lincoln to say, yes, there were those who had warned him that the new Secretary of War would run away with the whole concern. ‘We may have to treat him as they are sometimes obliged to treat a Methodist minister I know of out West. He gets wrought to so high a pitch of excitement in his prayers and exhortations that they are obliged to put bricks in his pockets to keep him down. We may be obliged to serve Stanton in the same way, but I guess we’ll let him jump a while first. Besides, bricks in his pockets would be better than bricks in his hat.'”2

Stanton was transformed during 1862 from ardent friend to zealous foe of General George McClellan. He conspired with other cabinet members at the end of August 1862 to block McClellan from command of the Union army. The effort failed when President Lincoln met with McClellan and Halleck without Stanton and appointed him first to command Washington’s defenses and then as overall commander of the Army of the Potomac on September 5. According to biographers Benjamin P. Thomas and Harold Hyman, at a critical Cabinet meeting on September 2, “Stanton joined with Chase in leading a chorus of complaint. Lincoln, clearly distressed to find himself at odds with most of the cabinet, explained that he had acted on his own responsibility for what he considered the country’s best interest. He held no brief for McClellan; he admitted the general had the ‘slows.’ But he also knew the ground around Washington and was qualified beyond anyone else to whip the army back into shape. The remonstrance against McClellan remained in Stanton’s pocked. Lincoln had made up his mind, and experience had taught Stanton that argument in such circumstances was fruitless.”3

It is related that a committee of Western men, headed by [Congressman Owen] Lovejoy, procured from the President an important order looking to the exchange of Eastern and Western soldiers with a view to more effective work. Repairing to the office of the Secretary, Mr. Lovejoy explained the scheme, as he had done before to the President, but was met by a flat refusal.
‘But we have the President’s order sir,’ said Lovejoy.
‘Did Lincoln give you an order of that kind?’ said Stanton.
‘He did, sir.’
‘Then he is a d—d fool,’ said the irate Secretary.
“Do you mean to say the President is a d—d fool?’ asked Lovejoy, in amazement.
‘Yes, sir, if he gave you such an order as that.’
The bewildered Congressman from Illinois betook himself at once to the President, and related the result of his conference.
‘Did Stanton say I was a d–d fool? Asked Lincoln at the close of the recital.
‘He did, sir; and repeated it.’
After a moment’s pause, and looking up, the President said:
‘If Stanton said I was a d–d fool, then I must be one, for he is nearly always right, and generally says what he means. I will step over and see him.’5

General James Fry, a War Department official who had frequent opportunity to observe the relations between the two men, noted such anecdotes were “interpreted as meaning that Lincoln could not control Stanton. The inference is erroneous. Lincoln, so far as I could discover, was in every respect the actual head of the administration, and whenever he chose to do so, he controlled Stanton as well as all the other Cabinet ministers.” Fry related a conflict between President Lincoln and Secretary Stanton which concluded with the following dialogue in Stanton’s office. Stanton said: “Now Mr. President, those are the facts, and you must see that your order cannot be executed.” The President cordially replied: “Mr. Secretary, I reckon you’ll have to execute the order.” Stanton objected: “Mr. President, I cannot do it. The order is an improper one, and I cannot execute it.” The President stared down the shorter Stanton and firmly issued an order: “Mr. Secretary, it will have to be done.”6

Generally, Stanton was much more irritable and explosive than the President. William Crook contrasted the personalities of the two men:

To such expressions of a natural impatience Mr. Lincoln opposed a placid front. More than that, he was placid. He knew Secretary Stanton’s intense, irritable nature. He knew how the excitement of the time tried men’s tempers and shattered their nerves. He himself, apparently, was the only one who was not to be allowed the indulgence of giving way. So Mr. Stanton’s indignation passed unnoticed. The two men were often at variance when it came to matters of discipline in the army. On one occasion, I have heard, Secretary Stanton was particularly angry with one of the generals. He was eloquent about him. ‘I would like to tell him what I think of him!’ he stormed.
‘Why don’t you?’ Mr. Lincoln agreed. ‘Write it all down – do.’
Mr. Stanton wrote his letter. When it was finished he took it to the President. The President listened to it all.
‘All right. Capital!’ he nodded. ‘And now, Stanton, what are you going to do with it?’
‘Do with it? Why, send it, of course!’
‘I wouldn’t,’ said the President. ‘Throw it in the waste-paper basket.’
‘But it took me two days to write —‘
‘Yes, yes, and it did you ever so much good. You feel better now. That is all that is necessary. Just throw it in the basket.’
After a little more expostulation, into the basket it went.7

According to historian Allen Nevins, Stanton’s “arbitrary temper was accentuated by his tendency to jump to conclusions. He would impetuously take a stand just to prove his authority, as he did early in the war in trying to destroy the invaluable Sanitary Commission. It was accentuated also by his intolerant, vindictive nursing of prejudices and grudges. He almost never admitted himself wrong, tried to see a situation from an antagonist’s eye, or showed generosity to a foe either victorious or defeated.”8

Stanton had a deserved reputation for irascibility but he also had a softer side, as revealed by an incident reported by Homer Bates, who worked in the War Department’s telegraph office: “One evening, in the summer of 1864, I rode out to the Soldiers Home with important despatches for the President and Secretary of War, who were temporarily domiciled with their families on the grounds of the Home. I found Stanton reclining on the grass, playing with Lewis, one of his children ..He invited me to a seat on the greensward while he read the telegrams; and then, business being finished, we began talking of early times in Steubenville, Ohio, his native town and mine. One of us mentioned the game of ‘mumble-the-peg,’ and he asked me if I could play it. Of course I said yes, and he proposed that we should have a game then and there. Stanton entered into the spirit of the boyish sport with great zest , and for the moment all the perplexing questions of the terrible war were forgotten. I do not remember who won.'”9

Because of his fragile health, Stanton tried to resign shortly after the Confederate surrender at Appomattox in April 1865, but his resignation was rejected by President Lincoln. “‘Stanton,’ reported his biographer Fletcher Pratt, ‘you cannot go. Reconstruction is more difficult and dangerous than construction or destruction. You have been our main reliance; you must help us through the final act. The bag is filled. It must be tied and tied securely. Some knots slip; yours do not. You understand the situation better than anybody else, and it is my wish and the country’s that you remain.'”10

Like Ward Hill Lamon, he had a continuing concern for the President’s safety and the inadequacy of his security arrangements. He tried to keep President Lincoln from going to the theater on April 14, 1865 by ordering one of his subordinates, Major Thomas Eckert, not to accompany the Lincolns. After Mr. Lincoln died, Stanton announced: “Now he belongs to the ages.” Stanton organized the response to Lincoln’s assassination, the pursuit of assassin John Wilkes Booth, and the prosecution of the assassination conspiracists.

Shortly after President Lincoln’s assassination, John Hay told Stanton: “Not everyone knows, as I do, how close you stood to our lost leader, how he loved you and trusted you, and how vain were all the efforts to shake that trust and confidence, not lightly given and never withdrawn.”11 Historian David E. Long wrote: “Stanton would become furious and fly into fits of rage at Lincoln time and time again. Thus many fail to consider the friendship of these two men…they were simply two professional politicians who tolerated one another in order to achieve a common goal. It seriously underestimates the respect and affection they actually felt toward one another.” According to Long: “Their common devotion to the cause of the Union, and their relentless determination to preserve it, created a bond that did not take the form of backslapping humor and thigh-pounding stories amidst relaxed banter that Lincoln shared with William H. Seward. But their hours and days spent together at the Soldiers’ Home, the relationship of their children, the tears that flowed from the eyes of the stolid Stanton when Lincoln took his last breath….these were much more revealing of the true nature of their shared concerns than the obvious and superficial manifestations the president demonstrated with others.”12

Stanton was the lead attorney on McCormick Reaper patent case on which Lincoln also served as counsel. Later, Stanton fought over Reconstruction with President Andrew Johnson, who tried to remove him. Stanton was named to the Supreme Court by President Grant shortly before Stanton’s death. Born poor, determined and imperious, devious but devoted, self-centered and self-confident, quick to judge and condemn, irritable and irascible, Stanton was driven by ambition as well as the national interest.