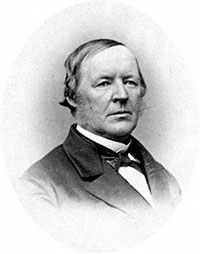 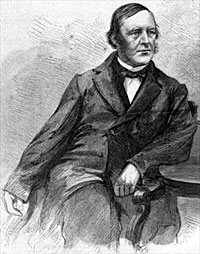 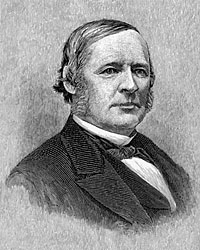 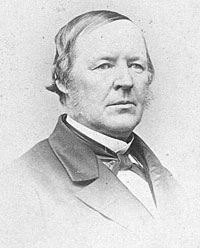 Secretary of the Treasury (1865-69), Hugh McCulloch was the third to occupy that post in the administration of President Lincoln. An Indiana banker who traveled to Washington in 1862 to object to national banking legislation, he nevertheless took a position from Treasury Secretary Salmon P. Chase as Comptroller of the Currency in the Treasury Department. He presided over paper currency although he was a strong advocate of the gold standard. A gloomy individual and an economic pessimist, McCulloch entered the cabinet when William Fessenden returned to the Senate and again briefly under President James Garfield in 1884-85.

Lincoln biographer Carl Sandburg wrote: “Solidly conservative, counted a ‘dependable’ man, he had in May of ‘63 gone into the office of Comptroller of the Currency under Chase. McCulloch’s hand perhaps more than that of any other in the Government had guided the organization and first operations of the newly created national banking system.”1 McCulloch recalled: “The more I saw of Mr. Lincoln the higher became my admiration of his ability and his character. Before I went to Washington, and for a short period after, I doubted his nerve and his statesmanship; but a closer observation relieved me of these doubts , and before his death I had come to the conclusion that he was a man of will and energy, of well-balanced mind, and wonderful sagacity.”2

McCulloch was not Mr. Lincoln’s first choice, however; New York Senator Edwin Morgan, a Republican party stalwart, was selected and his name sent to the Senate for confirmation in March 1865 before Morgan even knew he was under consideration. Morgan drove to the White House and prevailed on the President to withdraw his name for what were probably political reasons – he did not want New York Governor Reuben Fenton to succeed him in the Senate. Shortly thereafter, White House guard William Crook was told to go to McCulloch’s office and ask “Secretary McCulloch” to come to the President’s office. Crook did as he was told and McCulloch replied: “I am not the Secretary. There is some mistake.” Crook responded: “You will be as soon as you see the President.”3

McCulloch later recalled how he was appointed right after President Lincoln’s Second Inauguration: “‘I have sent for you, Mr. McCulloch, to let you know that I want you to be Secretary of the Treasury, and if you do not object to it, I shall send your name to the Senate. I was taken all aback by this sudden and unexpected announcement. It was an office that I had not aspired to, and did not desire. I knew how arduous and difficult the duties of the head of that department were, and a place had been offered to me in New York which it would be greatly for my interest to accept. I hesitated for a moment, and then replied: ‘I thank you, Mr. President, heartily for this mark of your confidence, and I should be glad to comply with your wishes if I did not distrust my ability to do what will be required of the Secretary of the Treasury in the existing financial condition of the Government.’ ‘I will be responsible for that,’ said the President.”4

One of President Lincoln’s last White House meetings on April 14, 1865 was with McCulloch, who later wrote: “I never saw Mr. Lincoln so cheerful and happy as he was on the day of his death. The burden which had been weighing upon him for four long years, and which he had borne with heroic fortitude, had been lifted; the war had been practically ended; the Union was safe. The weary look which his face had so long worn, and which could be served by those who knew him well, evening when he was telling humorous stories, had disappeared. It was bright and cheerful. As he took me by the hand when I was about to leave the White House, he said: “We must look to you, Mr. Secretary, for the money to pay off the soldiers” who were about to be relieved from military service.5

In an earlier conversation, the President had told McCulloch, “I am here by the blunders of the Democrats. If, instead of resolving that the war was a failure, they had resolved that I was a failure and denounced me for not more vigorously prosecuting it, I should not have been reelected, and I reckon that you would not have been Secretary of the Treasury.”6

Secretary of the Interior John Palmer Usher was critical of Hugh McCulloch, believing that he did not understand that as secretary of the treasury, he no longer represented “the creditor class.” According to Usher, who himself later became wealthy working for railroads, “When [McCulloch] came to be secretary, it appeared to many that he was not conscious that his position was changed; that he was no longer acting for the creditor class, but for the people; that his effort seemed to be to make the creditors of the government more secure and their credits more valuable, though it might be opposed to the interests of the taxpayers who had the debt to pay.”7 Usher’s criticism is understand since McCulloch’s appointment helped force Usher out of his job; it would have been politically difficult for Indiana to have two members of the Cabinet.