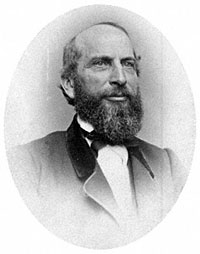 James Speed was the Attorney General of the United States who succeeded Edward Bates in late 1864. He was the brother of Joshua Speed, who had been Mr. Lincoln’s closest friend in Springfield before Speed returned to Kentucky in 1841. The friendship was transferred to James; guard William Crook described Speed as “Mr. Lincoln’s oldest friend in Washington; there were friendship and confidence between the two men.”1 Speed was a Douglas Democrat turned War Democrat, Union organizer and uncompromising abolitionist.

At the beginning of the Civil War, Kentucky Unionists arranged for the purchase of weapons to arm their supporters. According to historian Lowell H. Harrison, Speed “was sent to Indianapolis to obtain ammunition for the weapons. Most of the guns were sent to Louisville for distribution, but those intended for central Kentucky were shipped from Cincinnati to Lexington over the Kentucky Central Railroad.”2

Like his predecessor, Edward Bates, Speed came from a border state. Bates did not have a high opinion of his successor: “It seems that when he came into office a new man, with not much reputation as a lawyer, and perhaps, no strong confidence in his own opinions, he was caressed and courted by Stanton and Seward, and sank, under the weight of their blandishments, into a mere tool—to give such opinions as were wanted!”3

Mr. Lincoln, however, needed a Southern member for his Cabinet and Kentucky was as far South as he could reasonably go to find a new member. The President told a visitor: “My Cabinet has shrunk up North, and I must find a Southern man. I suppose if the twelve Apostles were to be chosen nowadays, the shrieks of locality would have to be heeded.”4 There was a delay in Speed’s confirmation because Republican senators wanted to convey their mild annoyance with the appointment of someone with whom they were not familiar. Because an attorney general’s approval was necessary to the appointment of a Supreme Court chief justice, Salmon Chase’s appointment was held up until the Senate acted. Secretary of the Interior John Palmer Usher later noted:

Speed had been summoned to Washington by President Lincoln in late November. After his arrival, Speed wrote his mother on December 5, 1864: “I have seen the President this morning and consented to take the office tendered, in the event my nomination is confirmed by the Senate. He desired that I should qualify at once and have the confirmation to follow. As the Senate is in session, I thought it best not to qualify until the nomination shall be confirmed.” Speed observed: “The call was sudden and unexpected. It looks to me much like leaving my old home and life-long friends forever. Yet in a crisis like this, we must fling behind us all such considerations.”6

As Attorney General, Speed had to defend the Administration’s policies on habeas corpus and military trials. William H. Rehnquist, who served as chief justice of the Supreme Court at the end of the 20th Century, described Speed’s skills as “lackluster” and wrote that he was not “aware of his own limitations” in arguing cases before the Supreme Court.7 Gideon Welles recorded in his December 29, 1864 diary, a cabinet meeting at which a court order for administration documents was discussed:

I called at the Executive Mansion at precisely ten this A.M. The President was not in. Mr. Attorney-General Speed came in soon after, and, while waiting for the President I stated to him the case. He said he heard something from Mr. Seward concerning it last evening. On the question of giving exemplified copies of public records and trial by court martial he was partly decided that copies should be furnished. The President came in while we were discussing the subject, and said he had not fully determined, but his opinion from the consideration he had given it coincided with that of Mr. Speed, but he proposed to send for Mr. Seward, who shortly came. On hearing that the President had hesitated in signing the paper prepared by him and doubted its correctness, he was very much surprised, not to say chagrined; but when Speed joined in those doubts, Seward was annoyed, indeed quite angry. He denied that the public papers of any Department were to subjected to private examination, and most emphatically denounced any idea of furnishing copies on the claim or demand of any State court or any court in a private suit. If it was conceded in a single instance, it must be in all. ‘And,’ said he, pointing to the private shelves of the President, which he keeps locked, ‘they will demand those papers.’ ‘But those,’ said the President, ‘are private and confidential, a very different affair.’ ‘Call them,’ said Seward, ‘what you please, you cannot retain them from Congress or the court if you concede the principle in this case. You cannot discriminate on their call; they will not admit the rectitude of your judgment and discrimination, if you give up to them the right of the demand now made on the Secretary of the Navy. He must not furnish them copies nor must he testify.’
‘Without being convinced, the President was an attentive listener, and I think his faith was somewhat shaken. ‘We will look at this matter fully and carefully,’ said he. ‘If the Secretary of State is right, we shall all of us be of his opinion, for this is a big thing, and this question must have been up and passed upon before this day.’
He then decided he would have a legal opinion from the Attorney-General, and framed questions for him to answer. Some modifications were suggested, and the matter closed for the present by the President instructing me not to give my evidence or copies till this question was decided.8

The Chicago Tribune reported: “One evening during the last week of his life, when extremely busy and weary as well, Lincoln was called to the reception room to see Mr. [James] Speed, then Attorney-General. He had called to introduce a friend and, seeing the weary look on the President’s face, began to apologize. ‘I am very sorry, Mr. President,’ said Mr. Speed, ‘to disturb you.’ ‘Speed,’ he replied, ‘you remind me of a story of Henry Ward Beecher. One Sunday as he was going to preach, he saw some boys playing marbles in the street. He stopped and looked at them very hard. ‘Boys,’ he said, presently, ‘boys, I am scared at what I see.’ ‘Then,’ replied one of the boys, ‘why the hell don’t you run away?’9

Speed’s conflict with President Andrew Johnson over the attorney general’s tough views on Reconstruction and Johnson’s veto of Freedmen’s Bill led to his resignation in 1866. Speed remained a dedicated Republican, running unsuccessfully for the Senate and the House.