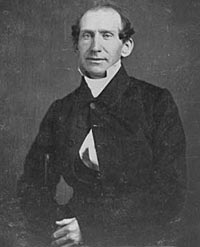 Assistant secretary to President Lincoln (1864-65), Edward Duffield Neill was an ordained Presbyterian minister and dedicated historian. At the beginning of the Civil War, Rev. Neill served as chaplain to a Minnesota regiment and later as an army hospital chaplain in Philadelphia.

Neill took on William Stoddard’s land patent duties after William Stoddard became ill in mid-1864. Lincoln biographer Carl Sandburg wrote: “Chaplain Neill came to Lincoln’s office with a Vermont colonel seeking a brigadier general’s commission Lincoln had signed. The President had not returned from lunch. Neill was looking among papers on the President’s desk. The President came in eating an apple. ‘I told him for what I was looking,’ wrote Neill of this, ‘and as I talked he placed his hand on the bell-pull, when I said, ‘For whom are you going to ring?’ Placing his hand upon my coat, he spoke but two words, – ‘Andrew Johnson.’ Then I said, ‘I will come in again.’ As I was leaving the room the Vice President had been ushered in, and the President advanced and took him by the hand.’”1 Secretaries John G. Nicolay and John Hayclearly trusted Neill, who was older than both of them. Leaving to meet with Horace Greeley in mid-July 1864, Hay wrote Edward Neill: “I am going to New York tonight on business. Will be gone only a very few days”

I leave matters in your hands till my return. There will probably be little to do. Refer as little to the President as possible. Keep visitors out of the house when you can. Inhospitable, but prudent.
I have a few franked envelopes. Let matters of ordinary reference go without formality of signature. If you have any doubt about any matter, please reserve it till my return.2

On the day President Lincoln was assassinated — April 14, 1865 — Neill saw President about a commission for the Freedman’s Bureau. He wrote later that “The President’s capacity for work was wonderful. While other men were taking recreation through the sultry months of summer he remained in his office attending to the wants of the nation. He was never an idler or a lounger. Each hour he was busy.”3

“Every month my impression of the greatness of President Lincoln increased. He was above a life of mere routine. In his bearing there was nothing artificial or mechanical,” wrote Neill. “He was independent of all cliques. Willing to be convinced, with a wonderful patience he listened to the opinions and criticisms of others.”4 Neill was also a chronicler of the President’s human side, writing on May 31, 1864: “Yesterday four or five thousand Sunday School children, with banner and bands of music[,] marched by the President’s House, while he stood at the window and received their hearty cheers with smiles…”5

Neill was a decade older than the older presidential assistants and had considerable experience in church and education affairs – while the primary assistants had a background in writing, journalism and politics. But like his colleagues, Neill was protective of the President.

One morning he told his doorkeeper that he should not be interrupted as he was much engaged. Senator Howard of Michigan, came and said he must see him. The doorkeeper could not disobey orders, and brought him to me. As soon as he sat down, he showed that he was in ill humor, and said: ‘If it were his own son he would not act so.’ Never having seen the Senator, and supposing him to be some agent to procure substitutes, I replied that if he continued to speak disrespectfully of the President, in his own house, I must request him to leave the room. He then said that he was Senator Howard, and that he had come to request suspension of sentence of a soldier who in a few hours was to be executed.
Entering the President’s room, I found him very busy in writing, and apologetically said: ‘Would not have interrupted you, but Senator Howard wants suspension of sentence, in a certain case.’ ‘Wants suspension! Well, that is a queer request.’ Afterward he told me to write a telegram, giving the soldier’s name, ordering suspension of sentence, sign his name, and send it through the War Department. I told him I would write the order, but preferred that he should sign it.6

Neill remained at the White House as an aide to President Andrew Johnson. Unlike Stoddard, whom he replaced, Neill was a moderate on Reconstruction policy. He later served as a diplomat in Dublin and president of Minnesota’s Macalester College. It was one of several Minnesota educational institutions that he had helped found. He also served as the state’s first superintendent of schools. He was devoted to the idea of education which taught Christian principles but unalterably opposed to co-education.