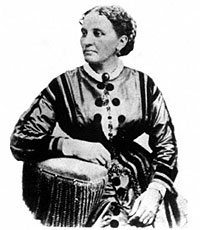 Elizabeth Keckley (may be have spelled “Keckly”), known as “Lizzie” or “Madame Elizabeth,” was a former slave who was a seamstress and confidante to Mary Todd Lincoln in the White House. Her soft-spoken, upbeat personality helped calm the President’s wife in moments of crisis. She lost her only son in battle in Missouri in August 1861. Later, she comforted Mary in her own maternal grief and advised consultation with spiritualists. She raised money for freed slaves and founded Contraband Relief Association. She was a woman of dignity, ambition and persistence; she had become seamstress to family of Jefferson Davis shortly after her arrival in Washington in 1860. Historian Catherine Clinton wrote: “Keckly rented rooms from Walker Lewis, a leading Washington caterer. She lived in and maintained her dressmaking establishment on Twelfth Street.”1

When she first applied for the seamstress job at the White House, the entrepreneurial ex-slave asked if there would be much work. “That, Mrs. Keckley, will depend altogether upon your prices. I trust that your terms are reasonable. I cannot afford to be extravagant. We are just form the West, and are poor. If you do not charge too much, I shall be able to give you all my work.”2 Shortly thereafter, Mrs. Keckley made a dress for Mrs. Lincoln for a levee. When she arrived at the White House, Mrs. Lincoln was in a fit, refusing to go down because she could not possibly be ready. Mrs. Keckley volunteered to dress her and fix her hair:

“Mr. Lincoln came in, threw himself on the sofa, laughed with Willie and little Tad, and then commenced pulling on his gloves, quoting poetry all the while.
‘You seem to be in a poetical mood to-night,’ said his wife.”
“Yes, mother, these are poetical times,’ was his pleasant reply. ‘I declare, you look charming in that dress. Mrs. Keckley has met with great success.” And then he proceeded to compliment the other ladies.”3

Mrs. Lincoln supported Elizabeth Keckley’s efforts to help freed black slaves through Keckley’s work with the Contraband Relief Organization. Keckley’s ghost-written memoir, Behind the Scenes, caused a break in her relationship with Mary Todd Lincoln, but provided a rare personal glimpse into the Lincolns’ family life because she was often present in the Lincoln’s private living quarters and privy to conversations that no non-family member heard. In her reminiscences, she told how Mrs. Lincoln worried that her husband needed to be reelected in 1864 in order for her to cover her shopping debts. Later, when Mrs. Keckley congratulated Mrs. Lincoln on the Republican victory, she replied: “Thank you, Elizabeth, but now that we have won the position, I almost wish it were otherwise. Poor Mr. Lincoln is looking so broken-hearted, so completely worn out, I fear he will not get through the next four years.”4

Mrs. Keckley helped Mrs. Lincoln through her own tragedies during the war, but she encountered one herself relatively early. On September 29, 1861, Mary wrote: “I know you will be sorry to hear, that our colored Matuamaker, Elizabeth, lost her only son & child in the battle of Lex[ington] Mo – She is heart broken. She is a very remarkable woman herself.”5 Mrs. Keckley’s son was able to “pass” as white in order to enroll in the Union army, which did not accept black soldiers on a mass basis until 1863.

Historian Carol Faulkner wrote: “Throughout her memoir, Keckley held up free African Americans as models of both independence and charity. Her catalogue of contributors to the Contraband Relief Society listed people of high status, accomplishment, and success.” Faulkner noted “The one thing she gained from slavery was ‘the important lesson of self-reliance.’ Though Keckley rejected the presumption of black dependence, she did acknowledge that not all African Americans shared her self-reliance. During the war, she encountered former slaves who had learned the same lessons, but for others, she judged, ‘dependence had become a part of their second nature, and independence brought with it the cares and vexations of poverty.’”6

Mrs. Keckley later served as a sewing instructor at Wilberforce University. Her generosity toward the black college injured her relationship with Mrs. Lincoln in 1868 a few months before the rupture caused by her memoirs. Mrs. Keckley had given to Wilberforce the clothes that Mrs. Lincoln had worn on the night her husband was assassinated. Wilberforce provided them for European tour.