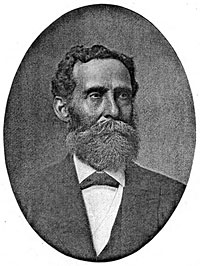 Thomas Pendel was the White House guard who replaced Edward McManus as chief doorkeeper in 1864. He enlisted in the Metropolitan police in the early 1860s and was later assigned to the White House. He often watched over Tad Lincoln, who called him “Tom Pen.” Pendel took care of Tad the night of the assassination after his return from Grover’s Theater where the President’s son was watching “Aladdin!” Pendel observed the relationship between the President and his son:

On one occasion there was no one in the room but little Tad Lincoln and myself. An old-fashioned settee and some rickety chairs constituted the furniture. Those were the days when we were not thinking about furniture. Little Tad piled two or three chairs upon the settee and secreted himself behind it. Just as the President came in, Tad pitched the chairs and settee over in the middle of the floor in front of his father. The President roared out laughing. Sometimes when we would come from the War Department and pass through the same little room, little Tad would be there, and he would put his great arms around the little fellow and tug him off upstairs.1

“Pendel looked very much like Lincoln and this fact must have given the Chief Executive much amusement, especially when the doorkeeper was mistaken for the President,” wrote Lincoln scholar Louis A Warren. “Governor Andrews of Massachusetts wrote a letter to Mrs. Lincoln asking her to urge William Morris Hunt, the famous Boston artist, to make a portrait of the President. Mrs. Lincoln later sent Pendel on to Boston where he posed for the artist in Lincoln’s clothes, as the portrait was to be one of full length.”2

Pendel’s job at the White House included lighting the windows of the White House with candles after each military victory. His lighting duties also extended to holding the candle to illuminate the text of the President’s serenade speeches as he stood at the window over the North Portico. After the assassination, Mrs. Lincoln wrote a letter of recommendation for him to President Andrew Johnson. Pendel later recalled his first meeting with President Lincoln in his book, Thirty-Six Years in the White House:

“Marshal [Lamon] took us upstairs and into the President’s office, where we were introduced to him and to his two secretaries…We were then instructed to keep a sharp lookout in the different parts of the house, more particularly in the East Room and at the door of the President’s office. After he had been on duty about three days, Sergeant John Cronin came to me and said, ‘Pendel, I want you to take my place near the President’s office, and I will send your dinner to you’. I took his place, and he sent my dinner up to me, but I think that was the last duty on the force he ever performed. He had other business in the city.

On the first Sabbath morning, as nearly as I can remember, a few days after our going on duty and the occurrences with Cronin which resulted in his leaving. It being the first Sabbath we were on duty at the White House, we were in a little waiting room on the right hand side of the stairs. This room is now sometimes used by the President as a smoking room, and also as a reception room for those calling on the President and his family socially. Where the elevator now is used to be a pair of little old-fashioned stairs. You would go up a few steps and come to a landing; up a few more steps and another landing, and so on. This was a favorite stairway of Mr. Lincoln’s for he used it more than any other in the house. When he came downstairs that Sunday morning we were all chatting, and by ‘we’ I mean Edward Burke, his old coachman, Edward McManus, Alfonso Dunn and myself. When Mr. Lincoln came into the room he said, “Which one of you gentlemen will take a walk with me as far as Secretary Stanton’s house? He is sick in bed and I want to see him.’ I immediately arose and said ‘Mr. President, I will walk with you.’ After we had passed out of the front door and were still on the main portico, but out of the hearing of any one, the President said to me, ‘I have received a great many threatening letters, but I have no fear of them.’ I said, “Mr. President, because a man does not fear a thing is no reason why it should not occur.’ He replied, ‘That is a fact.'”3