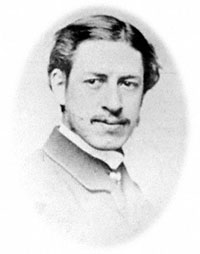 Assistant Secretary (1861-1864) William O. Stoddard sometimes accompanied the President to weapons tests. He was appointed “Secretary to the President to sign land patents” on July 15, 1861 after working as editor of the Central Illinois Gazette, serving first in the Interior Department. One of his original responsibilities was to prepare a digest of newspaper articles. It was stopped because, according to Stoddard, “Mr. Lincoln never found time to spend an hour upon laborious condensations.”1

According to Secretary John G. Nicolay’s daughter, “When the mass of correspondence finally grew too great for the two secretaries to handle, extra help was secured, as John Hay’s had been, by whipping the devil around the stump—a clerk being ostensibly appointed to one of the departments, then assigned to ‘duty at the White House.’ William O. Stoddard, perhaps the earliest of these, was originally a clerk in the Department of the Interior, authorized to sign land patents for the President. But since few land patents were signed during the war years, he was told to report at the White House where land patents could be signed just as well.”2

Stoddard briefly joined the army after the fall of Fort Sumter on April 12, 1861. One Sunday in May 1861, Stoddard recalled that he “took a furlough and went to the White House. It wore a deserted look. My latchkey let me in. I went upstairs and from room to room. All were empty, for Mr. and Mrs. Lincoln were at church, and I don’t know where the boys were. In my room were many papers awaiting my signature, but I left them on my table and walked over to Nicolay’s room, to be greeted by a shout from the distinguished but now forgotten Colonel Elmer Ellsworth ….We were talking war and the future when I picked up a carbine which stood in a corner and began to put Ellsworth through the manual of arms. As I did so, my orders brought him close to the south window. His movements had the precision of a machine. When the order came to take aim, the carbine went forward recklessly through a pane of glass, and I ordered him to shoulder arms. When the others came in, we had a story to tell them of an assassin among the bushes out yonder who had doubtless mistake Ellsworth or me for the President, and had attempted assassination. Perhaps the yarn would have lasted longer if Ellsworth could have kept his face straight, but as it was, the fun ended, and he and I went to our quarters.” 3

Stoddard’s son later wrote that Mr. Lincoln was “partial” to “Stod.” “On many evenings he took ‘Stod’ along when he made his calls on Secretary of State Seward and once on a vitally important call on General McClellan. To this were added trips to the Ford Theater. Even at that early age Stoddard was a writer (in …Often when Lincoln had prepared an address he would call ‘Stod’ into his private office across the hall to listen to it. He would say, ‘for criticism,’ but what he really wanted was a preliminary audience. He wanted to hear himself deliver his speech. Stoddard understood this perfectly; he listened, but knew better than to criticize, except with a touch of humor.”4

The handsome, diplomatic Stoddard was assigned to help Mrs. Lincoln, thereby acting as a personal buffer between her and the other two secretaries, among whom no love was lost. Stoddard “was given a desk in Mr. Hay’s office, and among other duties took over the care of Mrs. Lincoln’s mail. She liked ‘Stod’ better than she liked either my father or John Hay, and appears to have called upon him for all kinds of services, which they were only too glad to delegate to him.”5 Stoddard may have gotten along better with Mrs. Lincoln because he had similar notions about taking advantage of his position to make money. He provided information to a New York banker which helped predict gold fluctuations and contributed greatly to his financial independence. When Mrs. Lincoln heard of his success, she said: “I’m so glad to hear it! I think a great deal of Mr. Stoddard. Glad to hear of his good luck.”6

Mrs. Lincoln instructed Stoddard to open and screen all of her letters, even those from her family. Stoddard later wrote: “The insane, the depraved and the fiendish have by no means restricted themselves to the President in their infamous penmanship. His vilest foes are willing to vent their infernal malice upon his unoffending wife…”7 Stoddard’s health, like those of the President’s other secretaries, suffered during his service. In early 1862, he had a bout of typhoid. Stoddard was latter appointed U.S. Marshal in Arkansas and became a prolific writer of historical and children’s books. He recalled the President’s final words to him in the President’s office: “Take these things with you then’ – passes, letters, orders for transportation are in your hand – ‘and now there’s just one thing I want to say. The war is nearly over. Just when it will end, I can’t say, but it won’t be a great while. Then the Government forces must be withdrawn from all the Southern States. Sooner or later, we must taken them all away. Now what I want you to do is this: do all you can, in any and every way you can, to get the ballot into the hands of the freedmen! We must make voters of them before we take away the troops. The ballot will be their only protection after the bayonet is gone, and they will be sure to need all they can get. I can see just how it will be. Will you?’8

Stoddard’s influence with Mrs. Lincoln and handling of incoming correspondence gave him more power than his position might have warranted. By withholding papers in one capital case, he may have contributed to a man’s execution, according to Stoddard’s own version of the incident. He claimed to misplace papers of a guerilla who was facing execution. After it was too late to stop the execution, Stoddard said he “found those papers and took them in to the President. His eyes, and the droop of the corners of his mouth, showed complete understanding. He knew perfectly well that I had feared he would pardon that murderer. He said nothing, but I had the feeling that we were in agreement as to that execution.”9

Stoddard also took pride in claiming that he personally made the first copy of the draft Emancipation Proclamation in September 1862. Stoddard also recalled a less joyous time – on May 6, 1863 when news of the Union defeat at Chancellorsville reached the White House. Stoddard was working in John Hay’s office:

“Long hours meant nothing to me, and it was nine o’clock when I first saw Seward, Halleck and Stanton come out of Lincoln’s room and walk slowly away. I was alone on that floor of the White House, except for the President across the hall behind the now-half-open door. It seemed to me the hall and the silent rooms were full of shadows, some of which came in and sat down by my desk to ask me what I thought would become of the Union cause and the country. Not long afterward, a dull, heavy, regularly repeated sound came out of Lincoln’s room and found its way to mine. As I listened I became aware that this was the measured tread of the President’s feet. He was walking the length of the room, to and fro, from wall to wall, on the farther side of the Cabinet table.” For the next six hours, Stoddard heard the “tramp, tramp, tramp” of the President’s feet. Early the next morning, he found President Lincoln seeming fresh and composed at his desk, having written instructions to General Joseph Hooker. “I knew that an answer had come to him during that long night of marching, for he turned to me as composed as though he had not been up all night in that room face to face with disaster,” recalled Stoddard.11

After two bouts with typhoid, Stoddard left his White House post in July 1864. He had taken a break in July 1863, suffering from “Potomac River malaria” and gone north to New York. President Lincoln subsequently named him the federal marshal in Arkansas. Epstein, suggests, however that Stoddard’s departure make have been precipitated by Stoddard’s irresponsible speculation in gold: “The last thing the president needed in an election year was a stockjobber and curency gambler running a gold line from the White House to the New York banks.”13

Stoddard had a taste for gambling – in gambling house and financial instruments. He was subsequently accused of abusing his position for financial speculations on Wall Street. Stoddard wrote that “all who knew me at the time were already well aware of that fact. Stock and gold gambling was the mania of the day, and for a time I had it very badly, but I made no concealment of it, for I thought [it] no evil.” He protested that he had no inside information but found it hard to live on his government salary of $1500. “It was therefore something worth while when a New York banker whose friendship I had acquired told me that two thirds of the up and down movements in stocks and gold were caused by false rumors or misunderstandings of current events. He proposed that I should keep him advised of the true state of affairs, as far as I could, and he would open a stock and gold account for me. I was just the man for him and there was nothing in my position or sources of information which rendered it improper. I happened that my early guesses at truth were singularly correct and my accounts grew rapidly, both in New York and Washington. There was no manner of secrecy about my varied speculations. President Lincoln laughed at my investments…”14 John Hay was not amused, complained that Stoddard was “in New York stock Jobbing & writes to me pretending he is working for the election” in New York.sup>15 Stoddard recalled that “I formed an idea that it was almost true patriotism to be what was called a ‘bear’ in gold. I therefore went in, a little at first and then deeper…I had not the least idea that there was anything wrong in it for a fellow in my position…”16

But the prospect of Stoddard’s departure alarmed Lincoln’s primary secretaries. When Stoddard was preparing to leave the White House for Arkansas in September 1864, John Hay told John G. Nioclay: “John! What’ll we do with the Madame after Stod goes? Heaven! You and I can’t manage her.”17

Prior to coming to Washington, Stoddard had been editor of The Central Illinois Gazette in West Urbana and The Ford County Journal. He had been an early booster of Mr. Lincoln for president, having met him in October 1859 while a journalist. Stoddard, however, went to Washington in 1861 without any clear idea how he might be employed. Historian William Barringer wrote of Stoddard: “Perhaps, as he grew old, Stoddard really believed he was the original Lincoln man, that he started Lincoln towards immortality back in that spring of 1859.”18

Stoddard continued to submit articles to New York newspapers during the Civil War. After the Civil War, he made his living primarily as a writer. Among his books were several about Mr. Lincoln and his experiences working at the White House: Inside the White House in War Times, Lincoln’s Third Secretary and Abraham Lincoln: the Man and the War President.