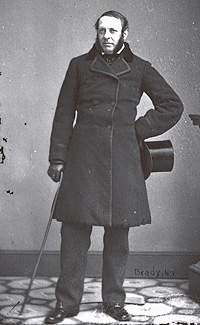 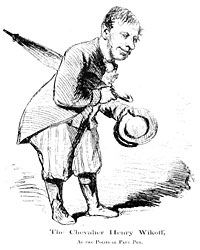 Chevalier Henry Wikoff was a cosmopolitan, globe-trotting rogue, professional gossip and amateur undercover reporter for the New York Herald. Wikoff arrived from Europe during the Buchanan administration and befriended Congressman Dan Sickles and his wife. He escorted Mrs. Sickles to parties before she took on another escort, Philip Barton Key. Sickles subsequently murdered Key for having an affair with her. Both Sickles and Wikoff had scandalous reputations for their affairs; however, both were included in the inner circle of Mary Todd Lincoln. He was as adaptable as the many spellings of his name.

Wikoff seemed to have no trouble making the transition from the Buchanan to Lincoln administrations. He moved easily among Democrats, and later Republicans. One of Wikoff’s close friends was New York Democrat Daniel Sickles. Sickles got to know Henry Wikoff when he was secretary of U.S. legation in England. Sickles himself was a former diplomat who saw an opportunity manage the American career of an exotic European dancer, Fanny Elssler. Historian Don C. Seitz wrote that Wikoff also “tried to keep Jenny Lind from signing up with P.T. Barnum, representing that Barnum was a mere showman and would not scruple at exhibiting her in a cage at twenty-five cents a head!”1 Noted Washington journalist John W. Forney, “He has seen more of the world than most men, has mingled with society of every shade and grade, has tasted of poverty and affluence, talks several languages fluently, is skilled in etiquette, art, and literature, and, without proclaimed convictions, is a shrewd politician, who understands the motives and opinions of others.” Forney observed of Wikoff: “Ranging through all society, he can talk of love, law, literature, and war; can describe the rules and thinkers of his time, can gossip of courts and cabinets, of the boudoir and the salon, of commerce and the Church, of the peer and the pauper, of Dickens and Thackeray…of General Sickles and Tammany Hall, and of the inner life of almost any capital in the world.”2

There were other exotic aspects to Wikoff’s background. Sickles biographer Thomas Keneally wrote that Wikoff “had served time [in Italy] on the accusations of abducting an American heiress, Jane C. Gamble. He was to have married her in London, but she fled to Italy to avoid him, and he pursued her and was accused of abducting her in Genoa. The fifteen months he had spent imprisoned were still fresh in his memory when he met the Sickleses, and they enriched his anecdotal liveliness.”3

Wikoff used – and was used by – the powerful. Don C. Seitz, biographer of Wikoff’s employer, New York Herald editor James Gordon Benett, wrote that Wikoff: “He was a squire of dames as well as of diplomats and wrote a book to justify the vain pursuit of an heiress that had a rather humiliating outcome, when the rich maiden got away. That he was a go-between is certain. Lincoln knew how to use men, and Wikoff was the sort of tame knave Bennett could utilize with his inside contacts on many things, social, political and international.”4

Mrs. Lincoln had a weakness for what journalist Henry Villard called “a common set of men and women whose bare-faced flattery easily gained controlling influence over her.”5 Henry Wikoff was typical of the flatterers who wormed their way into Mrs. Lincoln’s confidence. “Chevalier” Wikoff was a onetime diplomatic agent for both Britain and France. In almost all things, he was disreputable if frequently charming. Forney maintained that Wikoff “must not be called mercenary. Unlike the favorites that were sunned and ripened in the smiles of Louis Napoleon, he sticks to the unfortunate Emperor. He clung to General Sickles in his darkest hour, and though he sturdily stood by [New York Herald owner] James Gordon Bennett, the rich man, he was also one of his most industrious correspondents.”6

In his diary entry of November 3, 1861, the London Times’ William Howard Russell observed: “I hear that disgusting fellow Wikoff is master of ye situation at ye White House. Mrs. L’s meanness is beyond belief.” He related reports that Watt had been detached from the army to oversee cooking at the White House and that the temperamental Mrs. Lincoln was trying to cook the books by shifting entertainment expenses into the landscaping account for the House.”7 According to Villard, Mrs. Lincoln “accepted Wikoff as a majordomo in general and in special, as guide in matters of social etiquette, domestic arrangements, and personal requirements, including her toilette, and as always welcome company for visitors in her salon and on her drives.”8

Mrs. Lincoln’s reputation was unquestionably tarnished by her association with Wikoff. “It is said that she has installed as Master of Ceremonies at the White House, the Chevalier Wikoff,” future Supreme Court Justice David Davis wrote his wife in December 1861. “He is a terrible libertine, & no woman ought to tolerate his presence.”9 About the same time, a reporter wrote the Chicago Tribune: “Mrs. Lincoln making herself both a fool and a nuisance. Chavalier Wykoff [sic] is her galant. He is issuing invitations to her parties.”10 When exposed as a spy for a New York newspaper, Wikoff claimed that the White House gardener, John Watt, had leaked information about the President’s December 1861 Message to Congress. Although Wikoff was arrested and imprisoned for his misdeeds, he returned to Mrs. Lincoln’s social circle. Journalist Ben Perley Poore reported how a House investigating committee dealt with the affair:

“The House accordingly directed the Sergeant-at-Arms to hold Wikoff in close custody, and he was locked up in a room hastily furnished for his accommodation. It was generally believed that Mrs. Lincoln had permitted Wikoff to copy those portions of the message that he had published, and this opinion was confirmed when General Sickles appeared as his counsel. The General vibrated between Wikoff’s place of imprisonment, the White House, and the residence of Mrs. Lincoln’s gardener, named Watt. The Committee finally summoned the General before them, and put some home questions to him. He replied sharply, and for a few minutes a war of words raged. He narrowly escaped Wikoff’s fate, but finally, after consulting numerous books of evidence, the Committee concluded not to go to extremities. While the examination was pending,, the Sergeant-at-Arms appeared with Watt. He testified that he saw the message in the library, and, being of a literary turn of mind, perused it; that, however, he did not make a copy, but having a tenacious memory, carried portions of it in his mind, and the next day repeated them word for word to Wikoff. Meanwhile, Mr. Lincoln had visited the Capitol and urged the Republicans on the Committee to spare him disgrace, so Watt’s improbable story was received and Wikoff was liberated.11

Wikoff’s familiarity with Mrs. Lincoln began to invite comment, even from journalists. One Boston reporter, Matthew Hale Smith wrote after the war that Wikoff not only arrived early at White House social events, rode frequently in the Lincolns’ carriage, and could be “found lounging in the conservatory, or smoking in the grounds, very much at home, and not at all anxious to hide his presence.” According to historian Michael Burlingame, in February 1862 Smith confronted President Lincoln with evidence that Wikoff had been specifically hired as a spy and influence pedlar. As he later recalled, Lincoln ‘took me by the hand, led me into the office of his private secretary, whom he drove out, and locked the door.’ When Smith showed him documents illuminating the purposes of Wikoff, who at that moment was downstairs, the president said, ‘Give me those papers and sit here till I return.’12 Mr. Lincoln was not amused when shown evidence of Wikoff’s spying, confronted him, and personally escorted Wikoff out of the White House.

White House employee Thomas Stackpole told Orville Browning a few weeks later that Mr. Lincoln’s December 1861 message “had been furnished to Wycoff by [Mrs. Lincoln], and not by Watt as is usually supposed—that she got it of [John D.] Defrees, Sup[intendent] of government printing, and gave it to Wycoff in the Library, where he read it—gave it back to her, and she gave it back to Defrees. He also said the President had ordered that Wykoff should not be admitted to the White House, but that Mrs. Lincoln was now in the habit of meeting him in the Green House, Watt arranging the interviews.”13

Wikoff told different stories to different people – further undermining his shaky credibility. New York Herald reporter S. P. Hanscom testified that Wikoff “told me that he got it from Mrs. Lincoln….I would not have sent it unless I thought he had obtained it from such a responsible source. I readily believed what he told me, because I knew that he was frequently up at the White House.”14 Communications scholar Richard B. Kielbowicz wrote: “Sickles, a New York attorney who handled legal matters for the Herald, happened to be in Washington when the House took Wikoff into custody. The committee interrogated Sickles vigorously even though he invoked his attorney-client privilege. The committee was willing to respect the confidentiality of Sickles’s conversation with Wikoff, but it ordered the attorney to detail talks he had with other people. Sickles reluctantly told the committee that he had gone to the White House and interrogated the gardener, John Watt, who confessed that he gave parts of the president’s message to Wikoff. Sickles said that he communicated his findings to President Lincoln in a note. Wikoff eventually told the committee the same story, but its published report did not mention this aspect of the investigation. Most Washingtonians as well as historians believed that Sickles engineered Watt’s confession to spare the White house embarrassment.”15

Historian Margaret Leech wrote: “Events had combined to end Wikoff’s usefulness as the Herald’s spy at the White House, and he disappeared from Washington, though not from Bennett’s employment. A faint odor of intrigue with the Confederacy clung around the Chevalier….Shortly after his encounter with the Judiciary Committee, Mrs. Morris wrote Colonel Thomas Jordan of the Confederate army, ‘Mrs. Lincoln gave Wycoff the message you saw when they arrested him to make him tell.'”16 The genial rogue later returned to Europe and attached himself to French Emperor Louis Napoleon.