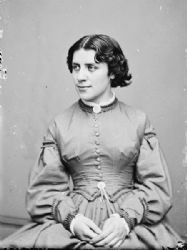 Noted abolitionist and novelist who earned a living giving speeches against slavery. Her 1863 campaign speeches in favor of Republican candidates made her a Republican celebrity; she was invited to speak before Congress in 1864 when she was only 22. In a Cooper Union speech in April 1863, Dickinson declared: “Here stands the North and liberty; yonder stands the South and slavery; and one straight line of gore that reaches from one the other is the only pathway we dare to tread until the Union and Freedom are triumphant!”1

Born a Quaker and raised an abolitionist, Dickinson became an outspoken champion of the Union cause in the Civil War. Historian Lisa Tendrich Frank wrote: “Dickinson’s extraordinary Civil War career unfolded in three overlapping stages. At the outset she was a young, charismatic, darling of the abolitionist movement. In early 1862, anxious to build a career as an orator, Dickinson wrote to Garrison for advice. The antislavery patriarch took her under his wing, arranging a New England tour culminating in a celebrated appearance in boston…She spent much of 1863 on the campaign trail, earning modest fees stumping for state Republican candidates…By the war’s final year, Dickinson was a true celebrity.”2 Historian James Harvey Young wrote that “Dickinson was an oratorical prodigy who, during the Civil War, inspired a war-weary North at one of the periods of its deepest gloom, forwarded the abolition crusade during the moments of the realization of its aims, and pleaded the cause of the Republican Radicals during the days of their rise to power.”3 Meeting her in Philadelphia in 1863, Ohio journalist Whitelaw Reid described her “voice so rich, so deep, so mellow, that you cannot help envying the possessor.”4

Dickinson’s age, her sex, and her slight size made her unique on the lecture circuit. James Harvey Young wrote: “The spectacle of a young lady upon the lecture platform, as assured as any man of her right to discuss the burning questions of the day, acted like a magnet. Her appearance on the rostrum was striking. Anna was slender; her short brown hair rippled in waves over her head and tossed like a man when she spoke; her face was round, her nose Grecian, her chin determined, and her grey eyes expressive.”5 Young wrote: “Her reputation brought her lecture invitations from cities throughout the North, and she crusaded for a vindictive reconstruction policy and for justice to the freed slave.”6

On January 16, 1864, the President received Dickinson at the White House. Congressman William D. Kelley arranged for her to speak in the House of Representatives and meet the president. Later that Saturday, Lincoln attended her speech at the Capitol. Vice President Hannibal Hamlin and House Speaker Schuyler Colfax escorted Dickinson to the dais. Historian Young wrote: “Anna was in the midst of a violent attack on Lincoln’s amnesty proclamation and his lenient plan of reconstruction announced the previous month, when the President and his wife entered the hall. Lincoln sat with bowed head as the self-possessed oratress finished her criticisms: ‘Let no man prate of compromise. Defeated by ballots, the South had appealed to bullet. Let it stand by the appeal. There was no arm of compromise long enough to stretch over the sea of blood, and the mound of fallen heroes, to shake hands with their murderers.’ The audience applauded Anna’s sentiment and the courage she exhibited in proclaiming it, while an enthusiast in the balcony wildly waved a flag over her head.” But Anna quickly went on to advocate Lincoln’s reelection: “Granted that we had much yet to do, we had the to complete the grand and glorious work, and that work was left for his second term in office.” Again, the audience cheered.7 The anti-slavery, pro-Dickinson newspaper, the Independent, reported:

“Mr. Lincoln sat with his head bowed, rarely looking Miss Dickinson in the face, but evidently catching every word, and, I have not a doubt, admiring her courage and honesty. When she had criticized the terms of the last proclamation, Miss Dickinson as boldly avowed her belief that the people would insist that Mr. Lincoln should retain his office for another term.”8

“Washington has witnessed strange scenes,” wrote Ohio newspaper reporter Whitelaw Reid. “I can recall none so strange as that witnessed in the Hall of the House of Representatives last Saturday night.”

The largest audience ever assembled there had gathered — the Statesmen, the Politicians, the Soldiers, the leaders of Public Opinion…The President of the Nation was present, with Cabinet officers, heads of Bureaus…There came upon the platform before the imposing audience the Vice-President of the Nation and the Speaker of the House of Representatives, and between them a young Quaker girl, eighteen months ago an humble employee in the mint, to-night the bravest advocate for the integrity of the Republic and the demand for universal liberty throughout it.”9

The mercurial Dickinson later drew back from her support for the President’s reelection and began again strongly criticizing his reconstruction policies. But she returned to Washington in the early spring of 1864 and spoke to President Lincoln again, again in the presence of Congressman Kelly. She then proceeded to caricature the White House interview in her speeches as she described her criticism of the president’s policies to his face. She claimed she confronted the president: “I didn’t come to hear stories. I can read better ones in the papers any day than you can tell me.” According to Dickinson, Lincoln’s last words to her were: “All I can say is, if the radicals want me to lead, let them get out of the way and let me lead.”10 A prominent Philadelphia abolitionist, J. M. McKim, questioned Dickinson’s version of the interview and apparently quizzed Congressman Kelley. McKim wrote of his investigation: “In that interview A. E. D. said but very few words. She was more a witness than a party. What she did say was ‘fool’ is according to her own acknowledgment at the time. She burst into tears – struck an attitude and begged Mr L. to excuse her for coming there to make a fool of herself. The President was paternally kind and considerate in what he said to her, and her requital is most – inexcusable.”11 Historian Michael Burlingame wrote: “If Dickinson’s version of the interview is accurate, her abrasive, not to say rude, manner makes Lincoln’s conduct seem restrained.”12

Dickinson subsequently swallowed her reservations and campaigned wholeheartedly for a Republican triumph in November 1864, but avoided mentioning Lincoln. She returned to criticism when Lincoln conducted peace negotiations with Confederate representatives at Hampton Roads in early February 1865.

Lincoln contemporary Paul Selby told a story about Dickinson that has often been repeated: “When Lincoln was inaugurated, the sun came out. It made my heart jump, the President told Noah Brooks. Later in the month, Miss Anna Dickinson, in a lecture delivered in the hall of the House of Representatives, eloquently alluded to the sunburst as a happy omen. The President sat directly in front of the speaker, and from the reporters’ gallery behind her I had caught his eye soon after he sat down. When Miss Dickinson referred to the sunbeam, he looked up to me, involuntarily, and I thought his eyes were suffused with moisture. Perhaps they were; but the next day he said: ‘I wonder if Miss Dickinson saw me wink at you.'”13 However, there is no record of Lincoln attending any such event at the Capitol after his Second Inaugural. Indeed, Lincoln was sick for much of March 1865 before visiting the front in Virginia at the end of the month.