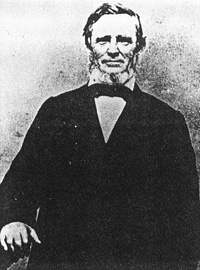 Close friend and personal doctor of Abraham Lincoln, Anson G. Henry was appointed by President Lincoln as the Surveyor General of Washington State. President Lincoln once described Dr. Henry to a new Oregon congressman: “What a great, big-hearted man he is. Henry is one of the best men I have ever known. He sometimes commits an error of judgment, but I never knew him to be guilty of a falsehood or of an act beneath a gentleman. He is the soul of truth and honor.”1

Henry visited the White House in March and April 1863 and was “ordered” by President Lincoln to move into the White House before joining the President on a visit to the war front from April 5 to April 10. Anson wrote his wife: “You will I know excuse my delay here, when you remember the great temptation I am under. When I came to say good bye Mr Lincoln insisted I should wait untill [sic] this week & go down with him and see the Army of the Potomack, & to render my stay certain, he ordered me to take up my headquarters at the White House, where, I am now writing.” He concluded his letter by saying that General Joseph “Hooker has a most exalted opinion of Mr. Lincoln’s sound judgement.”2

Historian Harry C. Blair wrote:“During the visit of Lincoln and his party General Hooker privately read to Doctor Henry the now famous letter he had received from the President when he assumed command of the Army of the Potomac. Lincoln had not hesitated to criticize the general for some of his past actions, but he had also indicated his confidence in Hooker’s judgment and in his ability to carry on in his important command. Doctor Henry thought so much of the letter he later wrote his wife ‘it ought to be printed in letters of gold.’”3

Henry also wrote his wife: “Any one that will read the Presidents letter to Genl. McClellan after the battle of Antietam, will not hesitate to say that he exhibits more Generalship than has ever been shown by any one in the field, and that if his suggestions had been carried out by McClellan the war would have been ended & ‘little Mc’ would have been a great Hero, for Mr Lincoln would have never claimed the glory. Now he is a dead Lion, if not a disgraced Officer. Genl. Hooker showed me the letter Mr Lincoln wrote him, when he tendered him the Command, & which ought to be printed in letters of Gold-It will be read by our posterity with greater veneration for its author than has ever been shown for any thing written by Washington, or any other man. It breathes a spirit of frankness & candor worthy of Mr Lincolns character. and is peculiarly his own.”4

Henry was a frequent guest at the White House and observed that “nine times out of ten not half the Senators get in [to Mr. Lincoln’s office] unless several go in to-gether & this is very often done, and they can take in with them as many of their friends and constituents as they please. It is no uncommon thing for Senators to try for ten days before they get a private interview.”5

Henry conspired with Mary Todd Lincoln to replace John Nicolay with Noah Brooks as the President’s secretary. In February 1865, Dr. Henry visited the White and was pressed by Mrs. Lincoln to remain: “Why can’t you come to Washington with Mrs. Henry, we would like very much to have you here, but I suppose I would be troubling you a good Deal.”6 On March 13, he reported in a letter to his wife his observations of the White House and his efforts to secure new posts for Brooks and himself. Dr. Henry wanted to replace William P. Dole as commissioner of Indian affairs:

…I have a very pleasant half hours interview with Mr. Lincoln last evening. My Pacific friends insisted that I should see him and let him know that I would like to remain in Washington. My friend Mr Noah Brooks was with me. I have been working ever since I have been here with Mrs. Lincoln to get [John G. Nicolay] out as private Secretary and Mr. Brooks in his place. Mr. Lincoln had never intimated what he would do, in reply to my suggestions, that Mr. Brooks was capable of rendering him infinitely more substantial service than Mr. Nickolay [sic] could, and that I presumed Mr. N. would like to go abroad. But to our happy surprise it was officially announced yesterday morning that Mr. Nickolay had been confirmed as Consul to Paris, hence the importance of seeing him before anybody else could see him. I am quite sure he will make Mr. Brooks his Secretary. It may turn out otherwise. The matter is confined to Mr. Brooks and myself. Mr. Nickolay will remain two or three weeks yet, & we don’t want it known that Mr. Brooks expects his place, but by the time this reaches you it will be all disposed of.
After Mr. Brook’s matter was laid aside, I said—Mr. Lincoln, you will bear me witness that I have never yet made a claim on you for preferment on personal grounds, and have sought this interview for the purpose of saying that I desire you to decide the application now being pressed upon you by the Pacific Delegation, as if you had never before seen or heard of me; not because I would not be gratified with receiving from you an additional manifestation of confidence. I wish my application to rest entirely upon the claim of our coast for a representation here at Washington in the Government. But while I say this, I think it is not egotism in me to say, that I am capable of serving you faithfully & efficiently, and to the general satisfaction of the country.
Mr. Lincoln replied. The thing that troubles me most is, that I dislike the idea or removing Mr. Dole who has been a faithful and devoted personal & political friend. I took up my hat & said, Well Mr. Lincoln, I will go home & remain where I am, not only, without a murmur, but entirely satisfied that you have done what you believe to be best calculated to promote the welfare and prosperity of the Government.
Mr. Lincoln said rather emphatically, Henry—you must not understand me as having decided the matter—and then said, ‘The Delegation from Minnesota are pressing very strongly for that place for Ex-Senator Wilkinson, and the Delegation from Illinois headed by Yates & Trumbull are pressing their man judge Kellogg. I replied—yes—our Pacific men are beginning to think that the old North West are getting the Lyons share of the offices. He replied laughing, ‘It does look a little that after. After some general conversation, we left very well pleased with the interview. Brooks says I am bound to have the place if Dole goes out. I think myself, that I have the inside track of all my competitors. The Illinois Delegation express their preferrence [sic] for me as against a man outside of their own state.7

Historian Robert W. Johannsen argued that Henry “would indeed have cut a pathetic figure had it not been for the fact that he enjoyed Lincoln’s confidence to an incredible degree. Henry kept a steady stream of correspondence flowing to the White House, as he informed the president of personal and political developments and tendered advice on administration policy.” Johannsen wrote: “Lincoln’s uncritical support of Henry’s posturing raised serious questions regarding the quality of his judgment and seems baffling when placed alongside his reputation as a shrewd judge of men.”8 Historian Paul M. Zall wrote: “In the hectic months of March and April, as war’s end neared, Lincoln had other matters on his mind, leaving Henry in enforced idleness visiting friends and touring. He was visiting City Point near Richmond when news of Lincoln’s assassination told him he had lost both a beloved friend and a promising future.”9

Henry was a friend to both Mary Todd Lincoln and Julia Jayne Trumbull during their long feud. In February 1863 during a visit to the White House, he had a long conversation with Mrs. Lincoln about her problems with the Trumbulls and other Springfield families. “I think Mary is right, & that they were aggressors,” wrote Dr. Henry: “Mary & Julia have both made me their confidant telling me their grievances, and both think the other all to blame. I am trying to make peace between them. It is as I told you. Mr. Trumbull was jealous of Col. Baker’s influence with Mr. Lincoln, and this was the cause of the family rupture.” (Henry was a long-time friend of Edwin D. Baker, whom he had helped entice to Oregon to run for the Senate in 1860.)

After President Lincoln’s assassination, he attended Mrs. Lincoln until she moved out of the White House. Henry wrote his wife: “I could not realize he was dead until I saw him lying in the guest chamber, cold and still in the embrace of death….After recovering my composure I sought the presence of poor, heart-broken Mrs. Lincoln.”10 Henry himself died in a shipwreck off California a three months later. He had left Washington when his appointment as commissioner of Indian affairs appeared stalled by Secretary of the Interior James Harlan.

Lincoln scholar Daniel Mark Epstein wrote: “He had completed his medical training in Cincinnati in 1826…and then practiced in Indiana, Kentucky, and Tennessee until 1828, when he decided to make his fortune mining in the Michigan Territory. When luck failed him, he went back to practicing medicine in Louisville, Kentucky.”11

Henry had served as fellow editor with Lincoln of a Whig paper called The Old Soldier in 1840—it was one of several newspapers with which Henry was involved during his life as a writer and editor. Henry aided and abetted Lincoln and Mary Todd during their troubled courtship—and attended Lincoln during his post-engagement depression of 1841. He was active in political affairs and held or sought a variety of political and governmental posts—including State House Commissioner. In the late 1830s and early 1840s, he was the effective head of the Whig organization in Illinois. When Henry was a candidate for probate justice in 1837, Lincoln wrote a scathing, anonymous criticism of Henry’s opponent under the pseudonym “Sampson’s Ghost.” The attacks backfired and Henry lost. Lincoln unsuccessfully promoted him for Postmaster of Springfield in 1841 to keep him from leaving town—again unsuccessfully. He eventually moved to Oregon.12