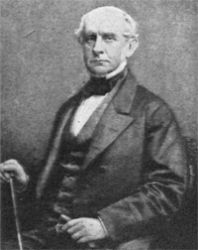 Republican Congressman (Republican, 1859-1861) who was appointed Minister to England by President Lincoln in 1861 and served there until 1868. He was the grandson of President John Adams and son of President John Quincy Adams. Adams was a stiff-backed opponent of slavery and an equally stiff-backed supporter of compromise with the South. He was a devoted colleague of William H. Seward, with whom he campaigned for the national Republican ticket in 1860. Along with Seward, Congressman Adams was a leader in efforts to stave off secession with a congressional compromise. He was among the potential candidates for a “New England” seat in the Lincoln cabinet.1

Adams held strong opinions about most things. After Lincoln’s nomination. Adams wrote: “I believe him honest and tolerably capable, but he has no experience and non business habits.”2 Adams himself became a leading Republican advocate of compromise with the South. Historian Russell McClintock wrote: “Like Lincoln, Adams had not taken secessionist rhetoric seriously at first – he thought the South had ‘no true grounds of complaint’ and considered disunionism to consist of mere threat ‘to deter the Republican party from using their triumph.’ He thought his party should cede ‘every doubtful point’ to stave off a national crisis, but he would not agree to any sacrifice of principle.”3 In late December 1860, Adams wrote: “The declarations coming almost openly from Mr. Lincoln have had the effect of perfectly consolidating the republicans.”4

Congressman Adams was critical of Lincoln’s unwillingness to assist his compromise efforts and was doubtful of his capacity to handle the presidency: “It was clear, at least to me, that our chances of safety would rest upon an executive council composed of the wisest and most experience men that could be found. So it seemed absolutely indispensable, on every account, that no only Mr. Seward should have been early secured in a prominent post, but that his advice, at least should have been asked in regard to the completion of the organization,” wrote Adams later. “The value of such counsel in securing harmony in policy is too well understood to need explanation. But Mr. Lincoln as yet knew little of all this. His mind had not even opened to the nature of the crisis. From his secluded abode in the heart of Illinois, he was only taking the measure of geographical relations and party services, and beginning his operations where others commonly leave off.”5 Seward maintained that “in the history of our Government…no experiment so rash has ever been made as that of elevating to the head of affairs a man with so little previous preparation for his task as Mr. Lincoln.” Adams believed that Lincoln “was quite deficient in his acquaintance with the character and qualities of public men, or their aptitude for the positions to which he assigned them.”6 Adams’s son, Henry, penned a report on “the Great Secession Winter” that was highly critical of Lincoln: “In spite of the assertions of newspapers and to the surprise of the country it became more and more evident that there was no concerted action between the President-elect and the Republicans at Washington, and that Mr. Seward had acted all winter on his own responsibility. The effect of this discovery was soon evident in the gradual destruction of party discipline in Congress, where every man began to follow an independent course, or commit himself against the measures proposed, from an idea that the President was against them.”7

Historian Garry Wills wrote: “When [President-elect] Lincoln reached Washington, the Adamses’s coldness to him was not thawed. Seward tried to make Charles Francis Adams the secretary of the treasury. When Lincoln refused his request, Seward promoted Adams for the far inferior reward of appointment as minister to England.”8 Adams had not been impressed by Lincoln’s procession to Washington which “betray[ed] a person unconscious of his position as well as the nature of the contest around him.”9 Adams came to the Willard Hotel on February 24, 1861 to meet with Lincoln. “Mr. Lincoln is a tall, ill-favored man, with little grace of manners or polish of appearance.” Inclined to disapprove of Lincoln, Adams went home impressed by Lincoln’s “good natured, frank expression which rather endears one to him.”10

The Massachusetts congressman was, however, highly critical of Lincoln’s actions during his first month in office. wrote that Lincoln was “a vulgar man, unfitted both by education and nature for the post of President.” Adams maintained that “Mr. Lincoln…has no conception of his situation. And having no system in his composition he has undertaken to manage the whole thing as if he knew all about it. The first evidence of this is to be found in his direct interference in the removal of Clerks in the Departments. The second is his nomination of persons suggested by domestic influence.”11 Adams biographer Martin Duberman wrote that Adams “had earlier felt that the President was lacking and experience and knowledge, but now he became convinced that Lincoln’s want of decision was drifting the country into war.”12

Adams was further annoyed by the manner of his designation as the U.S. Minister to England. Lincoln in fact had intended to appoint former New Jersey Governor William L. Dayton to the post, but Seward had prevailed with his preference for Adams. According to Mark Neely, Jr., Seward interrupted Lincoln by ushering Adams into the President’s office.13 To Adams’ thanks for his appointment, Lincoln responded: “Very kind of you to say so, Mr. Adams, but you are not my choice. You are Seward’s man.” The President then abruptly changed the subject, telling the secretary of state: “Well, Seward, I have settled the Chicago Post Office.” Historian Richard Brookhiser noted: “The encounter did not raise Adams’s opinion of Lincoln’s statesmanship, but it did show who was the better politician. The country had just fallen apart; now was precisely the time to cement the remainder with patronage.”14 Adams’s son Henry was appointed as his father’s private secretary. On May 1, 1861, they departed for England.

In his brief observance of the First Family, Adams was also critical of Mrs. Lincoln. He reported on March 11 about a Washington party: “All manner of stories about her were flying around; she wanted to do the right thing, but, not knowing how, was too weak and proud to ask; she was going to put the White House on an economical basis, and, to that end, was bout to dismiss ‘the help,’ as she called the servants; some of whom, it was asserted, had already left because ‘they must live with gentlefolks’; she had got hold of newspaper reporters and railroad conductors, as the best persons to go for advice and direction.”15 Even after he moved to London, Adams “always spoke disrespectfully of Mrs. Lincoln,” noted Burlingame.16

Adams performed well in his new job in London but maintained a highly skeptical attitude toward the diplomatic skills of President Lincoln. He interpreted the sometimes bellicose instructions from Seward as reflecting President Lincoln’s attitudes – not understanding that Lincoln sometimes toned down Seward’s notes. Lincoln scholar William Lee Miller wrote: “Although Lincoln may not have fully appreciated how good an ambassador Charles Francis Adams was, and although Adams certainly did not appreciate how good a president Lincoln was, the Union’s relationship Great Britain seems nevertheless to have been handled rather well, both in London and in Washington, given the disasters that might have happened.”17

Prior to the Civil War, Adams had served in the Massachusetts House of Representatives (1831) and State Senate (1835-1840). In 1848, Adams had been the Free Soil Party candidate for President on a ticket with Martin Van Buren.

Adams remained an occasional critic of President Lincoln even after his death. Adams later remembered that from their first meeting with Lincoln, “I became from a very lukewarm admirer of his, one of the most appreciative of his high qualities, and mourners of his great loss. I shall never forget the moment when, in London, the tidings of this loss were brought to me. I seemed as if we were all afloat in the midst of a boundless ocean.”18 However in 1873, Adams delivered a eulogy for William H. Seward in which he said that Lincoln was “a person selected partly on account of the absence of positive qualities, so far as was known to the public, and absolutely without the advantage of any experience in national affairs, beyond the little that can be learned by an occupation for two years of a seat in the House of Representatives. “While denigrating Lincoln’s preparation for the Presidency, Adams added: “He afterward proved himself before the world a pure, brave, capable and honest man, faithful to his arduous task, and laying down his life at the last as a penalty for his country’s safety.”19 Biographer Martin Duberman observed that although the speech was “favorably” received, “there was considerable rumbling over various remarks Adams had made about Lincoln.”20 Lincoln contemporaries, including former Navy Secretary Gideon Welles, objected strongly.