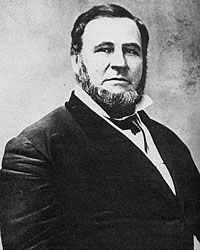 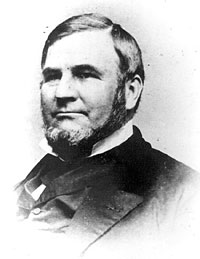 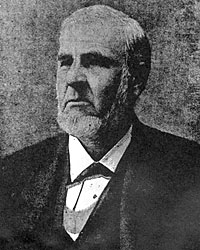 David Davis and Members of the Supreme Court 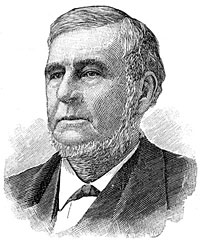 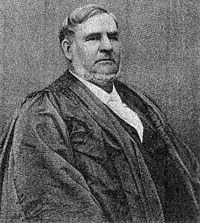 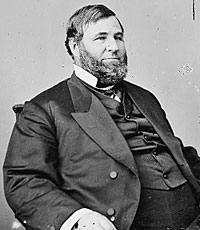 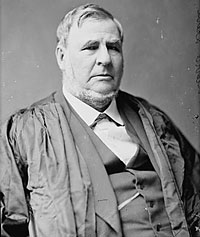 A member of the Supreme Court, David Davis master-minded Lincoln’s convention strategy in 1860 and was named to the Supreme Court by President Lincoln in 1862, over fellow Illinoisan Orville Browning. Davis was a cousin of Henry Winter Davis, who he promoted for cabinet in 1861, and who subsequently promoted him the Supreme Court.

Davis had accompanied the President-elect to Washington in February 1861 with visions of power and influence — none of which were realized. Instead, he returned to Illinois, according to historian M. L. Houser, “a chastened, saddened, and disgusted boss-without-a-client,”1 and awaited Mr. Lincoln’s decision on a judicial appointment. It did not come quickly, although the President did appoint Davis as chairman of a federal commission investigating claims against the military administration of General John C. Frémont in Missouri during 1861. Davis’s frustration in his relationship with the President is reflected in a statement he made in 1866: “Lincoln was a peculiar man; he never asked my advice on any question—sometimes I would talk to him & advise him; he would listen.”2

The president was also aggravated with patronage pressure from Davis.“There’s Davis with that way of making a man do a thing whether he wants to or not, has forced me to appoint Archy Williams judge in Kansas right of and John Jones to a place in the State Department, and I have got a bushel of dispatches from Kansas wanting to know if I’m going to fill up all the offices from Illinois.”3

Two decades later, Lincoln friend Henry C. Whitney: “The old man justly felt as if he should have been rewarded: and Lincoln couldn’t see the exact place for him.” Whitney wrote: “I have no doubt” Swett was “sent by Davis to Washington often at his own expense about this matter. Davis had very few cordial friends. He complained to me that Lamon wouldn’t do anything for him: dole and Swett were doubtless the most active.” Whitney said that Davis “was very loud & noisy and would send for every body he knew to come to him at their expense & pour out his sorrows: at Washington in March, as he left, he told me he had no doubt Lincoln would give him an office if he would ask him for it but he never would do that – no sir: he wasn’t that kind of a man. But he set others on the hunt.”4

Efforts to install Davis on the supreme Court became with the death of Judge John McLean in the spring of 1861. “I see Judge McLean has departed this life. The question is who shall succeed to the erwine so worthily worn by him” wrote Judge Lawrence Weldon to Ward Hill Lamon. He maintained that “if justice, and gratitude are to be respected, Lincoln can do nothing less than to tender the position to Judge Davis…I want you to suggest it to Lincoln.”5 Another legal cohort, Henry C. Whitney wrote Lamon that if Davis wasn’t nominated, “it is a d—n pretty pass, a man has come to in the house of his friend.”6

President Lincoln delayed fill vacancies in 1861, but pressure mounted again in 1862 among Davis’s friends. The President filled two other vacancies before he appointed Davis. Davis wrote a close friend: “Since I have found so many friends pressing me for Supreme Judge I am getting to feel some desire about it thought feeling great distrust of my ability to fill the office acceptably and creditably.”7 Even non-Illinoisans like Iowan Hawkins Taylor reminded President Lincoln of his political debts, writing him in July 1862 that “but for the extraordinary effort of Judge Davis, you would not have received the nomination at the Chicago Convention…I feel that it is due to yourself as well as to Judge Davis that you should tender him the appointment of Supreme Judge.”8

The President finally named Davis on October 19, 1862, after he had filled two other Supreme Court vacancies and after considerable maneuvering by Davis’ friends, by Illinois Senator Orville H. Browning, and by Secretary of the Interior Caleb Smith for the post. Historian Willard L. King observed that although Davis coveted the assignment, he worried that his judicial experience was inadequate: “Davis’ misgivings were understandable; his experience had been confined to a trial court—he had never even argued a case in the Supreme Court of Illinois—and he doubted his ability to fill a place in a higher tribunal. It is fair to assume that Lincoln shared his doubts. He himself had handled more cases before the Illinois Supreme Court than almost any lawyer in the state and he knew that an excellent trial judge might not necessarily make the best Supreme Court Justice.”9

Davis’ base among Illinois politicians was strong, but he was not in Washington to personally lobby on his own behalf—as were Browning and Smith. “In May 1862, Smith tried to eliminate Davis for the Supreme Court by having him appointed to the Court of Claims, to which two judges had recently been added by an Act of Congress. Smith enlisted in this effort John P. Usher, an old circuit lawyer friend of Davis from Indiana and now Smith’s assistant in the Department of the Interior. ‘I should of course prefer to see you upon the Supreme Bench,’ Usher wrote Davis. ‘However, Browning is, I think pressing for it. I hear he is very much at the President’s and is supposed by many to be a favorite.’ In the light of Browning’s probable appointment, Usher suggested to Davis that he might want a place on the Court of Claims,” wrote Davis biographer Willard L. King.10 Davis declined to engage this maneuver, writing that “the President should be left free from the suggestions of personal friendship, to select those who can most assist him in his great work.”11

“Davis could not be expected to drop political activities,” noted historian David M. Silver. “Justice Davis did not hesitate to write to Lincoln about political matters and on several occasions intervened to support certain candidates for office or to obtain political favors. …At times Justice Davis brought friends to see the President, wrote him notes of congratulations, asked for political favors, and gave Lincoln advice—sometimes unsolicited and undesired. When Lincoln named former Governor [William Dennison] of Ohio to be Postmaster General, Justice Davis congratulated Lincoln, saying that Dennison is ‘honorable, high-minded, pure, & dignified.’ When the district judgeship in Indianapolis became vacant, Davis advised the appointment of David McDonald and concluded, ‘Excuse these suggestions.”12

Browning recorded in his diary on January 19, 1863: “In conversation with Judge Davis of the Supreme Court this morning he told me that he had a conversation with the President yesterday in which he represented to him the alarming condition of things, and urged upon him to reconstruct his cabinet, and change his [emancipation] policy, s the only means of saving the Country. The President told him that this proclamation in regard to slavery was a fixed thing—that he intended to adhere to it, and whether he changed his cabinet must be determined by future events.”13

Nearly ten years later on July 3 1873, Browning made another diary entry concerning a conversation with Davis: “At breakfast I took a seat by Judge Davis,” wrote Browning. “I referred to Mrs. Lincoln; spoke of her unhappy and ungovernable temper, but added that great injustice had been done her; that her faults had been exaggerated, and that I believed that all the charges against her of having pilfered from the White House were false. The Judge replied that the proofs were too many and too strong against her to admit of her guilt; that she was a natural born thief; that stealing was a sort of insanity with her, and that she was carried away, from the White House, many things that were of no value to her after she had taken them, and that she had carried them away only in obedience to her irresistible propensity to steal.”14

Like Browning, Davis pressed the President for political favors. A particular object of Davis’ solicitude was fellow attorney William Orme, who desired a promotion to brigadier general, but whom Mr. Lincoln was reluctant to elevate “until he distinguishes himself in battle.” According to biographer Willard King: “After Congress had passed the bill fixing the number of brigadiers, Davis again pressed Lincoln for the appointment [in early 1863]. ‘I like Orme as well as you do,’ Lincoln pleaded, ‘but you would hesitate when you have a limited number to appoint, as I have.'” When Davis next returned to the White House, Mr. Lincoln said: “There’s Davis. He bothers me nearly to death. The list of new brigadier generals had been made up and Orme is on it.” Davis insisted on seeing the list and discovered that Orme’s name was on it but had been “been crossed off. He shouted at the outrage, and Lincoln sent the list out with instructions to restore Orme’s name.15

Davis served as executor of President Lincoln’s estate. He told Browning that “after Mr. Lincoln’s death a bill was presented to him as adm[inistator of the president’s estate] by a merchant of New York, for $2,000, for a dress for the last inauguration; a very large bill for furs, the amount of which I do not remember, and a bill by Mr Perry, a merchant of Washington for 300 pairs of kid gloves, purchased by her between the first of January and the death of Mr Lincoln, all of which he refused to pay; and that the only bill which had been proven against the estate, and which he had paid, was one for $10 for a country newspaper, somewhere in Illinois. He also told me that Simeon Draper had paid her 420,00 for his appointment as cotton agent in the city of New York.” Draper was a New York Merchant and Republican politician connected with the Seward wing of the party. He had been appointed New York customs collector in September 1864.16

Davis was elected in 1844 to serve one term as a Whig in State Legislature from Bloomington. He later became an Illinois circuit judge (1849-1862) with whom Abraham Lincoln worked extensively in late 1840s and 1850s and with whom he shared a love of jokes. Davis biographer Willard L. King wrote: “Not until March 1849 did Davis sit in his own circuit. ‘My Circuit commences in ten days at Springfield & lasts till 11th of June,’ he told Rockwell in early March. When Davis first held court in Springfield, Lincoln had not yet arrived from Washington, but his partner, William H. Herndon, recorded that Judge Davis made ‘quite a good and agreeable Judge.’”17 Historian Harry E. Pratt wrote: “The clearness and quickness of his intellect, his preparatory education and his practice had fully equipped Judge Davis to discharge the various duties of his position.”18

Davis himself said when he learned of the President’s murder: “I sorrow, not only as a citizen of the United States, but, as a personal and devoted friend of the President.”19 Davis became executor of President Lincoln’s estate. On the day that President Lincoln died, Robert Todd Lincoln wired Davis: “Please come at once to Washington to take charge of my father’s affairs.” Robert wrote late in life: “Upon my father’s death I went to Judge Davis as a second father, and this he was to me until his death.”20

Davis maneuvered for the Liberal Republican nomination for President in 1872. He resigned from the Court and in served in the Senate from 1877-1883.