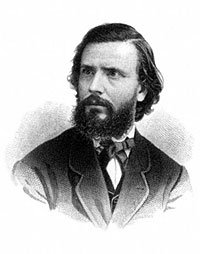 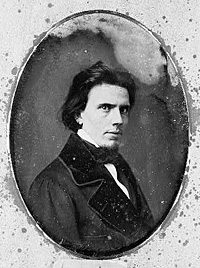 Francis Carpenter was the New York State portrait painter who worked on “Emancipation Proclamation” while living at the White House for six months, beginning in February 1864, having first met Mr. Lincoln on February 6. He also painted a family portrait of the Lincolns and their three sons around a table – after one son, Willie, had already died. His recollections were later presented in a book, Six Months at the White House. In one incident, Mary Jane Welles, wife of Secretary of the Navy Gideon Welles, dropped by to see the painting. Carpenter told her about newspaper reports that the paintings as completed were “unreliable.” Mr. Lincoln interjected: “That is to say, Mrs. Welles, that they lie and then they relie.”1

“Carpenter went to the White House because he had a vision,” noted Lincoln scholar Herbert Mitgang. “In a dream he saw Lincoln’s efforts to free the slaves like that of an angel in combat with Satan. A voice in his dream said, ‘Behold how a Man may be exalted to a dignity and glory almost divine, and give freedom to a race. Surely Art should unite with Eloquence and Poetry to celebrate such a theme.’ Historian Margaret Leech wrote: “Lincoln took an innocent pride in Carpenter’s work. He was devoid of aesthetic appreciation, but this was a picture he could understand. He found the painter congenial too. Carpenter was painfully earnest and humorless, but he was a gentle thoughtful fellow, and he conceived a worshipful admiration for the President.”2

Historian David Hackett Fischer wrote of the painting: “The most prominent figure is not the president but Secretary of State William H. Seward. The artist was a New Yorker and a strong admirer of Seward. He centered his painting on the moment when Seward urged Lincoln to wait for a major union victory before issuing the proclamation. Most of the cabinet and the president himself were looking toward Seward, who appears as a strong leader than the President himself.”3

Historian Margaret Leech wrote: “Lincoln took an innocent pride in Carpenter’s work. He was devoid of aesthetic appreciation, but this was a picture he could understand. He found the painter congenial too. Carpenter was painfully earnest and humorless, but he was a gentle thoughtful fellow, and he conceived a worshipful admiration for the President.”4 Carpenter was a frequent nocturnal companion of President Lincoln on walks around Washington. As Carpenter described his most famous work: “The central thought of the picture once decided upon and embodied, the rest naturally followed; one after another the seven figures surrounding the President dropped into their places. Those supposed to have held the purpose of the Proclamation as their conviction, were placed prominently in the foreground in attitudes which indicated their support of their measure; the others were represented in varying moods of discussion or silent deliberation.”5

Carpenter’s painting is displayed in a staircase of the U.S. Capitol. “So satisfied was Mr. Lincoln himself with this and the other portraits upon this canvas, and so deeply did he feel the national import and future interest of the occasion, that it was his own earnest wish that this work should eventually become the property of the nation,” William O. Stoddard later wrote.6 Carpenter himself observed that Mr. Lincoln told him “it would greatly please him to have Congress buy it, but it was a delicate subject for him to speak of.”7 Earlier, the President told Carpenter: “I feel that there is more of me in this portrait than in any representation, ever made.”8

Presidential aide William O. Stoddard contested whether the formal image painted by Carpenter was an approximation of reality in which the Cabinet members lounged about the President’s office. “Perhaps it would have been in violation of the canons of high art to have painted the thing as it really was – not being an artist, I cannot say about that.” He suggested the painting should have been labeled: “Table, surrounded with gentlemen waiting to have their picture taken.”9

The President’s wife had an even less charitable opinion of Carpenter. Mary Todd Lincoln later complained “this man Carpenter, never had a dozen interview{s] with the late President and the latter complained more than to have the use of State dining room, whilst he was executing his painting. This was only done, in consequence of the rumor we had heard of his indigent circumstances. He is a second edition of Mr. L’s crazy drinking law partner Herndon endeavoring to write himself into notice, leaving truth, far far, in the distance. C. intruded frequently in Mr. L’s office when time was too precious to be idled. Of this fact, I am well aware.”10

Journalist William A. Croffut recalled: “Frank B. Carpenter, the artist, dropped in the Treasury Department one morning and invited John Pierpont, Ed Stedman, and myself to go over to the White House and see the portrait of Mr. Chase which he was just finishing in the great historical group on which he was engaged. ‘Signing the Emancipation Proclamation.’ The large canvas was propped up against the wall in the state banquet room. It was the opinion of a majority that Mr. Chase’s unfinished portrait promised to be more lifelike than that of the President or any other of his cabinet. Mr. Lincoln was the severest critic the artist had. He was not present on this occasion, but Mrs. Lincoln paused in passing through the room and said to to the old poet, ‘What puzzles me is, what on earth are we ever going to do with it,’ – evidently having a vague idea that it must somehow be got into the little wood cottage they had left in Springfield, Illinois. Nobody could conjecture that Mrs. Elizabeth Thompson would come forward and pay $25,000 for it and give it to the country, so that it would find permanent place upon the walls of the Capitol.”11

According to historian Allen C. Guelzo, “The political message of the painting was subtle, and its impact was muted compared to the acclaim Carpenter’s realistic detail earned for him when the painting was finally exhibited in July at the White House. ‘The Great sensation of the city during the past few days has been Carpenter’s picture of “The Emancipation Proclamation before the Cabinet,”’ wrote Lois Bryan Adams, who joined “the hundreds of comers and goers listening to the criticisms of his great work of art.”12

Just before he removed the painting from the White House, President Lincoln viewed it for one last time. Carpenter inquired whether the president would like anything changed: “No,’ he replied, and then repeated very emphatically the expression he used when the design was first sketched upon the canvas: “it is as good as it can be made.” Then Carpentered spoke “at some length, to the enthusiasm in which the picture was conceived and had been executed, concluding with an expression of my profound appreciation of the very unusual opportunity afforded me to the prosecution of the work, and his unvarying kindness and consideration through the many weeks of our intercourse.” Before he left, the President told Carpenter: “I believe that I am about as glad over the success of this work as you are.”13

“In the decades following Lincoln’s death, Carpenter, apparently determined to become as well known for his Lincoln portraits as Gilbert Stuart was for those of Washington, continued to produce paintings of the sixteenth president, and arranged for the skillful adaptation of several of his works into popular engravings, reaping significant financial rewards for his efforts,” wrote Lincoln scholars Harold Holzer, Gabor S. Boritt, and Mark E. Nelly, Jr..14