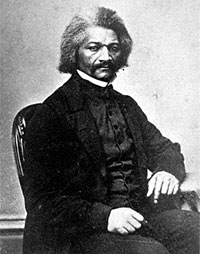 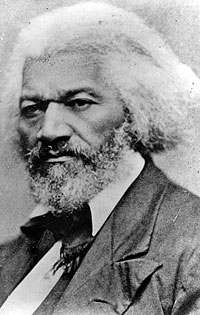 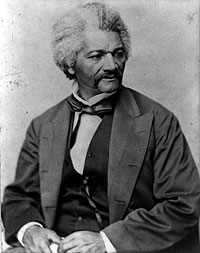 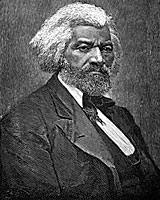 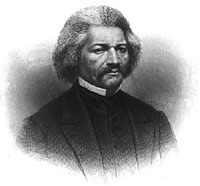 Nearly a year later on August 19, 1864, Douglass returned to the White House at the President’s request. Douglass was impressed that President Lincoln prolonged their conversation despite the arrival of Connecticut Governor William A. Cunningham. Douglass recalled: “Mr. Lincoln said, ‘tell Governor Buckingham to wait, for I want to have a long talk with my friend Frederick Douglass.'” Douglass commented: “This was probably the first time in the history of this Republic when its chief magistrate found occasion or disposition to exercise such an act of impartiality between persons so widely different in their positions and supposed claims upon his attention. From the manner of the governor, when he was finally admitted, I inferred that he was as well satisfied with what Mr. Lincoln had done, or had omitted to do, as I was.”1 In his autobiography, Life and Times of Frederick Douglass, the abolitionist author wrote:

The increasing opposition to the war, in the North, and the mad cry against it, because it was being made an abolition war, alarmed Mr. Lincoln, and made him apprehensive that a peace might be forced upon him which would leave still in slavery all who had not come within our lines. What he wanted was to make his Proclamation as effective as possible in the event of such a peace. He said in a regretful tone, ‘The slaves are not coming so rapidly and so numerously to us as I had hoped.’ I replied that the slaveholders knew how to keep such things from their slaves, and probably very few knew of his Proclamation. ‘Well,’ he said, ‘I want you to set about devising some means of making them acquainted with it, and for bringing them into our lines. He spoke with great earnestness and much solicitude, and seemed troubled by the attitude of Mr. Greeley, and the growing impatience there was being manifested through the North at the war. He said he was being accused of protracting the war beyond its legitimate object, and of failing to make peace, when he might have done so to advantage. He was afraid of what might come of all these complaints, but was persuaded that no solid and lasting peace could come short of absolute submission on the part of the rebels, and he was not for giving them rest by futile conferences at Niagara Falls, or elsewhere, with unauthorized persons. He saw the danger of premature peace, and, like a thoughtful and sagacious man as he was, he wished to provide means of rendering such consummation as harmless as possible. I was the more impressed by his benevolent consideration because he before said, in answer to the peace clamor, that his object was to save the Union, and to do so with or without slavery. What he said on this day showed a deeper moral conviction against slavery than I had even seen before in anything spoken or written by him. I listened with the deepest interest and profoundest satisfaction, and, at his suggestion, agreed to undertake the organizing of a band of scouts, composed of colored men, whose business should be somewhat after the original plan of John Brown, to go into the rebel states, beyond the lines of our armies, and carry the news of emancipation, and urge the slaves to come within our boundaries.2

Presumably, it was at this meeting that Mr. Lincoln told the abolitionist leader: “Douglass, I hate slavery as much as you do, and I want to see it abolished altogether.”3 A few days later, Douglass wrote the President: “all with whom I have thus far spoken on the subject, concur in the wisdom and benevolence of the idea, and some of them think it is practicable. That every slave who escapes from the Rebel States is a loss to the Rebellion and a gain to the Loyal Cause I need not stop to argue[;] the proposition is self evident. The negro is the stomach of the rebellion.”4

“Reaching the Capitol, I took my place in the crowd where I could se the presidential procession as it came upon the east portico, and where I could hear and see all that took place,” Douglass later wrote. “The whole proceeding was wonderfully quiet, earnest, and solemn. From the oath, as administered by Chief Justice Chase, to the brief but weighty address delivered by Mr. Lincoln, there was a leaden stillness about the crowd. The address sounded more like a sermon than a state paper.” Douglass described events later that day when he tried to attend the Inaugural levee at the Executive Mansion:

For the first time in my life, and I suppose the first time in any colored man’s life, I attended the reception of President Lincoln on the evening of the inauguration. As I approached the door, I was seized by two policemen and forbidden to enter. I said to them that they were mistaken entirely in what they were doing, that if Mr. Lincoln knew that I was at the door he would order my admission, and I bolted in by them. On the inside, I was taken charge of by two other policemen, to be conducted as I supposed to the President, but instead of that they were conducting me out the window on a plank.

‘Oh,’ said I, ‘this will not do, gentlemen,’ and as a gentleman was passing in I said to him, ‘Just say to Mr. Lincoln that Fred. Douglass is at the door.’

He rushed in to President Lincoln, and almost in less than half a minute I was invited into the East Room of the White House. A perfect sea of beauty and elegance, too, it was. The ladies were in very fine attire, and Mrs. Lincoln was standing there. I could not have been more than ten feet from him when Mr. Lincoln saw me; his countenance lighted up, and he said in a voice which was heard all around; ‘Here comes my friend Douglass.’ As I approached him he reached out his hand, gave me a cordial shake, and said: ‘Douglass, I saw you in the crowd today listening to my inaugural address. There is no man’s opinion that I value more than yours; what do you think of it?’ I said: ‘Mr. Lincoln, I cannot stop here to talk with you, as there are thousands waiting to shake you by the hand’; but he said again: ‘What did you think of it?’ I said: ‘Mr. Lincoln, it was a sacred effort,’ and then I walked off. ‘I am glad you liked it,’ he said. That was the last time I saw him to speak with him.5

Many colored people in Washington, and large numbers had desired to attend the levee, but orders were issued not to admit them. A gentleman, a member of Congress, on his way to the White House, recognized Mr. Frederick Douglas, the eloquent colored orator, on the outskirts of the crowd.

‘How do you do, Mr. Douglas? A fearful jam to-night. You are going in, of course?’

‘Not going in to shake the President by the hand! Why, pray?’

‘The best reason in the world. Strict orders have been issued not to admit people of color.’

‘It is a shame, Mr. Douglas, that you should thus be placed under ban. Never mind; wait here, and I will see what can be done.’

The gentleman entered the White House, and working his way by the President, asked permission to introduce Mr. Douglas to him.

‘Certainly,’ said Mr. Lincoln. ‘Bring Mr. Douglas in, by all means. I shall be glad to meet him.’

The gentleman returned, and soon Mr. Douglas stood face to face with the President. Mr. Lincoln pressed his hand warmly, saying: ‘Mr. Douglas, I am glad to meet you. I have long admired your course, and I value your opinions highly.’

Mr. Douglas was very proud of the manner in which Mr. Lincoln received him. On leaving the White House he came to a friend’s house where a reception was being held, and he related the incident with great pleasure to myself and others.

On the Monday following the reception at the White House, everybody was busy preparing for the grand ball to come off that night. I was in Mrs. Lincoln’s room the greater portion of the day. While dressing her that night, the President came in, and I remarked to him how much Mr. Douglas had been pleased on the night he was presented to Mr. Lincoln. Mrs. L. at once turned to her husband with the inquiry, ‘Father, why was not Mr. Douglas introduced to me?’

‘I do not know. I thought he was presented.’

‘It must have been an oversight then, mother; I am sorry you did not meet him.’

I finished dressing her for the ball, and accompanied her to the door. She was dressed magnificently, and entered the ballroom leaning on the arm of Senator Sumner, a gentleman that she very much admired. Mr. Lincoln walked into the ballroom accompanied by two gentlemen. This ball closed the season. It was the last time that the President and his wife ever appeared in public.’6

Douglass escaped from slavery in 1838 after a harsh life of servitude in Maryland. He was later hired by William Lloyd Garrison as a speaker for the Anti-Slavery Society. He founded and edited the North Star, an abolitionist newspaper. After Lincoln’s assassination, he became an ally of Radical Republicans and a friend of Mary Todd Lincoln who gave him one of President Lincoln’s canes. “It was often said during the war that Mrs. Lincoln did not sympathize fully with her husband in his anti-slavery feeling, but I never believed this concerning her, and have good reason for being confirmed in my impression of her by the fact, that when Mr. Lincoln died and she was about leaving the White House, she selected his favorite walking cane and said: ‘I know of no one that would appreciate this more than Fred. Douglass.’ She sent it to me at Rochester, and I have it in my house to-day, and expect to keep it there as long as I live,” Douglass later wrote.7

President Ulysses S. Grant appointed Frederick Douglass Marshal of District of Columbia and Minister to Haiti, the two highest appointed positions in the federal government to which a black American was appointed in the 19th Century.