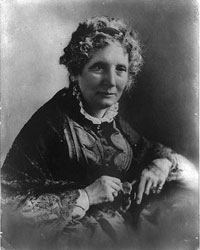 Harriet Beecher Stowe was an anti-slavery activist and the author of Uncle Tom’s Cabin, a novel that did much to radicalize northerners against slavery. Harriet was the daughter, wife and sister of famous preachers. She criticized President Lincoln early in the Civil War, but changed her attitude after meeting with him in 1862.

Harriet Beecher Stowe wrote in her memoirs: “Probably no ruler ever made a more profoundly and peculiarly Christian impression on the mind of the world than Lincoln. In his religious faith two leading ideas were prominent from first to last – man’s helplessness, both as to strength and wisdom, and God’s helpfulness in both.”1 She had become a Lincoln admirer, but she was not always so. Her son and grandson wrote: “Mrs. Stowe, like so many others at this time, had failed to grasp Lincoln’s far-sighted statesmanship. ‘Mr. Lincoln has been too slow,’ she said, speaking of what she called his ‘Confiscation Bill.’ He should have done it sooner, and with an impulse….’”2

Stowe biographer Edward Wagenknecht wrote that Stowe “preferred to forget some things about her earlier attitude toward Lincoln. Her sketch of him in Men of Our Times was admiring without giving any suggestion that she had been extremely critical of him until late in the war. The closes she comes is to say that ‘there was a time when he pleased nobody.’” Wagenknecht wrote: “By September 5, 1861, she was calling for immediate emancipation by Presidential proclamation. She was furious when Lincoln overruled Frémont’s liberating the slaves in captured territories and removed him from his command, and when the President said that his ‘paramount object’ was ‘to save the Union and…not either to save or destroy Slavery,’ she produced a bitter parody by rewriting his statement as she thought Christ would have made it…”3

Biographer Constance Mayfield Rourke wrote that “she decided that Lincoln was ‘too slow’ and hastened to Washington to offer him advice. He seems to have received her gravely; after all he had been harassed by many evangels.”4 Her son and grandson recalled: “Mrs. Stowe, in telling of her interview with Mr. Lincoln…dwelt particularly on the rustic pleasantry with which that great man received her. She was introduced into a cosy room where the President had been seated before an open fire, for the day was damp and chilly. It was Mr. Seward who introduced her, and Mr. Lincoln rose awkwardly from his chair, saying, ‘Why, Mrs. Stowe, right glad to see you!’ Then with a humorous twinkle in his eye, he said, ‘So you’re the little woman who wrote the book that made this great war! Sit down, please,’ he added, as he seated himself once more before the fire, meditatively warming his immense hands over the smouldering embers by first extending the palms, and then turning his wrists so that the grateful warmth reached the backs of his hands. The first thing he said was, ‘I do love an open fire. I always had one to home.’ Mrs. Stowe particularly remarked on the expression ‘to home.’ ‘Mr. Lincoln,’ said Mrs. Stowe, “I want to ask you about your views on emancipation.’ It was on that subject that the conversation turned.”5

Rourke continued: “On she rushed, regardless of Lincolns, constantly under foot, it would seem, demanding special privileges for her son Frederick, who had enlisted, insisting that she be kept in touch with the opinions and decisions and movements of cabinet officers and major officials.”6

Harriet Beecher Stowe herself wrote: “Lincoln was a strong man, but his strength was of a peculiar kind; it was not aggressive so much as passive, and among passive things it was like the strength not so much of a stone buttress as of a wire cable. It was strength swaying to every influence, yielding on this side and on that to popular needs, yet tenaciously and inflexibly bound to carry its great end. Probably by no other kind of strength could our national ship have been drawn safely through so dreadful a channel.”7

Novelist Stowe wrote: “He saw through other men who thought all the while they were instructing or enlightening him, with a sort of dry, amused patience. He allowed the most tedious talker to prose to him, the most shallow and inflated to advise him, reserving only to himself the right to a quiet chuckle far down in the depths of his private consciousness. Thus all sorts of men and all sorts of deputations saw him, had their talks, bestowed on him al their tediousness, and gave him the benefit of their opinions; not a creature was denied access.”8

Regarding the “little woman” quote attributed to the president, Lincoln scholar Daniel R. Vollaro wrote that it is likely that the Stowe quote was invented by the family at a later date and no contemporary evidence of it.9 Don. E. Fehrenbacher wrote that the quote is “unverified family tradition.”10

Mrs. Stowe was the daughter of the Rev. Lyman Beecher and the brother of Henry War Beecher. Her novels include Dred: A Tale of the Great Dismal Swamp, Oldtown Folks and The Pearl of Orr’s Island.