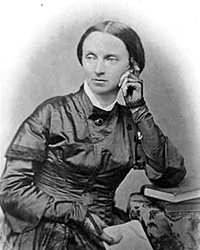 Jane Grey Swisshelm was a journalist, abolitionist, temperance advocate and feminist. During the early part of the Civil War, she was based in Minnesota with her family. She came to Washington to urge a harsh response to the Indian uprising in Minnesota and stayed on to work as an army clerk and volunteer as an army nurse in nearby field hospitals.

Mrs. Swisshelm was a Seward supporter in 1860, but she supported Mr. Lincoln’s election that fall with anti-slavery speeches in Minnesota. She was critical of President Lincoln’s policies on slavery and wrote in her St. Cloud Democratnewspaper that the President appeared “determined to protect slavery at whatever hazard to the country.”1 She was harshly critical of the President reversal of General David Hunter’s emancipation proclamation in May 1862 and strongly supportive of the President’s draft Emancipation Proclamation in October 1863.

Her sympathies did not extend to her Indian neighbors in Minnesota. “Moved to emotion by thoughts of Negroes in slavery, the energetic editor had nothing but scorn and contempt for the Indian,” noted historian Frank Klement.2 It was her opposition to clemency for Sioux Indians involved in a violent uprising in the summer of 1862 that led her to come to Washington in early 1863. Biographer Sylvia D. Hoffert wrote: “By December the Dakota War was over. Dissatisfied with Lincoln’s response to the uprising and determined to seek vengeance for the hundreds of white settlers who had been killed, Jane temporarily turned her editorship of the St. Cloud Democrats over to her nephew, William B. Mitchell. In January 1863, she left St. Cloud and traveled to Washington, hoping to convince Lincoln to take a stronger stand against the Indians. ”3

Seeking to meet President Lincoln proved somewhat problematic. Mrs. Swisshelm missed her first appointment at the White House when she fell sick. Nevertheless, Swisshelm met quickly met with many prominent Republican leaders, who paid her compliments on her activism. One fan was Secretary of War Edwin M. Stanton who arranged for her to work as a clerk in the quartermaster general’s office. Historian Frank Klement wrote: “There she nurtured her prejudice against the president and the first lady, believing Mrs. Lincoln to be a Confederate sympathizer. She let four public receptions pass before she was ‘with difficulty persuaded to go to the Levee on the 2ndnd inst.’ in April 1863.”4

“My friends wished me to attend a Presidential reception; but it was useless to see Mr. Lincoln on the business which brought me to Washington and I did not care to see him on any other. He had proved an obstructionist instead of an abolitionist, and I felt no respect for him; while his wife was every where spoken of as a Southern woman with Southern sympathies – a conspirator against the Union,” recalled Swisshelm in her memoirs. “I wanted nothing to do with the occupants of the White House, but was told I could go and see the spectacle without being presented. So I went in my broadcloth traveling dress, and lest there should be trouble about my early leave-taking, would not trust my cloak to the servants, but walked through the hall with it over my arm. I watched President and Mrs. Lincoln receive. His sad, earnest, honest face was irresistible in its pleas for confidence, and Mrs. Lincoln’s manner was so simple and motherly, so unlike that of all Southern women I had seen, that I doubted the tales I had heard. Her head was not that of a conspirator. She would be incapable of a successful deceit, and whatever her purposes were, they must be known to all who knew her.”

She wrote: “Mr. Lincoln stood going through one of those, dreadful ordeals of hand-shaking, working like a man pumping for life on a sinking vessel, and I was filled with indignation for the selfish people who made this useless drain on his nervous force. I wanted to stand between him and them, and say, ‘stand back, and let him live and do his work.’ But I could not resist going to him with the rest of the crowd, and when he took my hand, I said:

“May the Lord have mercy on you, poor man, for the people have none.
He laughed heartily, and the men around him, joined in his merriment. When I came to Mrs. Lincoln, she did not catch the name at first, and asked to hear it again, then repeated it, and a sudden glow of pleasure lit her face, as she held out her hand and said how very glad she was to see me. I objected to giving her my hand because my black glove would soil her white one; but she said:
“Then I shall preserve the glove to remember a great pleasure, for I have long wished to see you.’”
My escort was more surprised than I by her unusual cordiality, and said afterwards:
“It was no polite affectation. I cannot understand it from her.”5

Swisshelm later recalled: “I understood at once that I had met one with whom I was in sympathy. No politeness could have summoned that sudden flash of pleasure. Her manner was too simple and natural to have any art in it; and why should she have pretended a friendship she did not feel?” According to abolitionist Swisshelm: “I recognized Mrs. Lincoln as a loyal, liberty-loving woman, more staunch even than her husband in opposition to the Rebellion and its cause, and as my very dear friend for life.”6

The reception also changed Swisshelm’s opinion of President Lincoln: “He could never dodge or prevaricate, and his policy was that of the teacher who seeks to lead his pupils to the highest plane, and by the best means known to himself. His simplicity and self-forgetfulness, his total lack of that weakness which finds strength in rank, were evident at a glance. To himself he was no greater as Commander-in-chief than he would have been as corporal or private. His aims were all his country’s, his ambition to render her the best service in his power; and this he would have done in any position, with as much pride as he commanded his armies.”7

Swisshelm wrote that before her February 1863 visit, she had “a feeling of scorn” for Lincoln before she met him, she was “startled to find a chill of awe pass over me as my eyes rested upon him. It was as if I had suddenly passed a turn in a road and come into full view of the Matterhorn.” She wrote: “I have always been sensitive to the atmosphere of those I met, but have never found that of any one impress me as did that of Mr. Lincoln, and I know no word save “grandeur” which expresses the quality of that atmosphere. I think that to me no familiarity, no circumstance, could have made him other than grand. The jests, the sallies, with which he amused small people and covered his own greatness, were the shrubs on the mountain side, the flowers which shot up in the crevices of the rocks ! They were no part of the mountain. Grandly and alone he walked his way through this life ; and the world had no honors, no emoluments, no reproaches, no shames, no punishments which he could not have borne without swerving or bias.”8

Shortly before Swisshelm attended the White House reception, she went to a mass Union meeting at the Capitol on March 31. She wrote a report on the President for the St. Cloud Democrat: “He is very tall and very pale. He walked quickly forward, bowed and took his seat. He was dressed in a plain suit of black which had a worn look; and I could see no sign of watch chain, white bosom or color. But all men have some vanity, and during the evening, I noticed he wore on his breast, an immense jewel, the value of which I can form no estimate. This was the head of a little fellow ‘Tad’ Lincoln, about seven years old, who came with him and for a while sat quietly beside him in one of the great chairs, but who soon grew restless and weary under the long drawn out speeches of the men in the desk, and who would wander from one Member of the Cabinet to another, leaning on and whispering to him, no doubt asking when that man was going to quit and let them go home; and then would come back to father, come around, whisper in his ear, then climb on his knee and nestle his head down on his bosom. As the long bony hand spread out over the dark hair, and the thin face above rest the sharp chin upon it, it was a pleasant sight. The head of a great and powerful nation, without a badge of distinction, sitting quietly in the audience getting bored or applauding like the rest of us; soothing with loving care the little restless creature so much dearer than all the power he wields – a power greater than that exercised by any other human being on earth.”9

Mrs. Swisshelm did heroic work as a nurse at Campbell Hospital in Washington and other venues. Prior to the Civil War, Jane had been the first female Washington correspondent for a major newspaper – the New York Tribune. She started her journalistic career writing for the Louisville Journal before founding the Spirit of Liberty and Saturday Visitor in Pittsburgh. She subsequently moved to Minnesota where she founded the St. Cloud Visitor and later the Democrat.