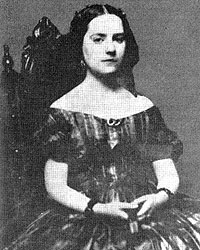 The two Taft boys, Bud and Holly, were the constant playmates—and sometime schoolmates—of Willie and Tad Lincoln until Willie’s death in February 1862. When Willie was dying, Bud held a vigil at Willie’s deathbed. “If I go he will call for me,” he told the President when Mr. Lincoln urged Bud to get some rest. But Mary Lincoln banished the two boys from Willie’s memorial service, writing the Tafts’ mother: “Please keep the boys home the day of the funeral. It makes me feel worse to see them.”1 Perhaps one reason was that the Taft and Lincoln boys looked remarkably alike.

Their 16-year-old sister Julia Taft often supervised the mischievous foursome before their illnesses. In many ways, Julia was treated like the daughter the Lincolns never had. Mr. Lincoln called her a “flibbertigibbet” which he defined as “a small, slim thing with curls and a white dress and a blue sash who flies instead of walking.”2 Julia and her brothers left Washington shortly after Willie’s funeral; their presence was painful to Tad and his mother. Their father, Horatio N. Taft, was chief examiner in the patent office. Julia had a ringside seat for Mrs. Lincoln’s virtues and vices. When Julia lamented about a boyfriend who had joined the Confederates, Mrs. Lincoln comforted her: ‘Yes, dear, it is sad when our friends are in the rebel army.’ On the other hand, when Mrs. Lincoln coveted a lavender ribbon on a bonnet belonging to Julia’s mother, she virtually insisted on being given it.3 Mr. Lincoln had a more flippant but gallant attitude toward Julia, who remembered one day in the Family Library when the President brought in some photographs. “Julie, do you want my picture?” asked Mr. Lincoln. When Julie eagerly indicated she did, he responded: “Give me a kiss then and you can have it.” Julia recalled: “So I stretched up and he leaned over and I gave him a peck on the cheek. I remember to this day how scratchy his whiskers were.”4

Julia wrote a book about her experiences, Tad Lincoln’s Father, in which she recalled the following incident:

Once, as I was sitting on the sofa with some silk and velvet pieces on my lap, out of which I was trying to make a pin-cushion, the President came into the room. I rose at once, my pieces falling on the floor. When the President went out, I picked them up and was just getting them sorted out again when he came in the second time. True to my training, I again rose and the silk once more scattered to the floor.
‘You needn’t get up, Julia, every time Abram comes in the room,’ said Mrs. Lincoln.
‘Why, Julie,’ said the President, noticing my silk pieces on the floor, ‘that’s too bad.’ Before I knew what he was about, he had knelt on the floor and was picking up the pieces of silk for me. Greatly embarrassed at this presidential gallantry, I darted forward to help him and together we picked them up.
One day the boys and I, who should have known better, were leaning out of the front windows to watch a regiment go by, when the President passed and pulled us all in. He jerked in the boys with little ceremony but lifted me down gently, saying, ‘Do you want to break your neck, honey?5

Much later in the war in 1864, Julia Taft attended a levee at the White House. “Mrs. Lincoln seemed glad to see me again and was quite her old affectionate self, asking after my mother and the family. But when Tad came in and saw me, he threw himself down in the midst of the ladies and kicked and screamed and had to be taken out by the servants,” wrote Julia Taft later. “Mrs. Lincoln said, ‘You must excuse him, Julia. You know what he remembers.'”6

The boys’ father, Judge Horatio N. Taft, was chief examiner in the Patent Office. He had been a prominent New York Democrat but had strong ties with southern Democrats. When he lost his job in late 1861, President Lincoln found him another government position. The Tafts lived a few blocks north of the White House near Franklin Square. The boys shenanigans sometimes mortified the family—as the day when Tad and Holly interrupted a cabinet meeting by assaulting the White House with their toy cannon. Julia recalled one day hearing “a terrible racket in another room, and opening the door with the idea of bestowing some sisterly ‘don’t upon my young brothers, whose voices could be heard amid the din, beheld the President lying on the floor, with the four boys trying to hold him down. Willie and Bud had hold of hands, Holy and Tad sprawled over his feet and legs, while the broad grin of Mr. Lincoln’s face was evidence that he was enjoying himself hugely. As soon as the boys saw my face at the door, Tad called, ‘Julie, come quick and sit on his stomach.’ But this struck me too much like laying profane hands on the Lord’s anointed, and I closed the door and went out.”7

Julia recalled that “The President seemed to take a great liking to Bud. On more than one occasion he used Bud as a messenger boy, sending him on errands, some of which seemed rather too important to be intrusted to one so young. When Bud would return home and tell us about errands, my father would express wonder that the President should select a twelve-year-old boy as a messenger in place of the orderlies and official messengers at his beck and call. Perhaps the President thought the boy might pass unnoticed amid that atmosphere of suspicion and intrigue, or perhaps it was just because he knew how Bud worshipped him and how proud he was to serve him.”8

Charles Sabin Taft, an older half-brother, was a doctor who treated President Lincoln after he was shot on April 14, 1865 Julia Taft subsequently married a Congregational minister.