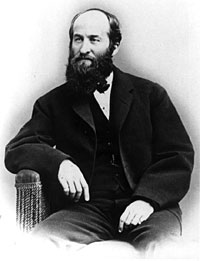 Noah Brooks was a journalist and frequent visitor to the White House. He became a friend of President Lincoln in Illinois in 1856 before moving to California in 1859. He came to Washington as a correspondent for the Sacramento Union in 1862 after his wife died in childbirth. There, his friendship with the President allowed him to report with unusual insight into the White House. Brooks used his column to help protect the President against critics. He was steadfastly loyal to the president and wrote: “I would have made myself poor for the sake of serving a man so dear to me…”1

In Washington, he served as a political confidante of Mr. Lincoln, who used him for conversation and political intelligence, knowing that it would take a long time for his reports to see newspaper print on the other side of the country. “The President appeared often in Brooks’ dispatches, the friendship of the two men being only hinted at. Brooks’ wartime letters recorded several Lincoln anecdotes and stories, but only those that would neither embarrass nor belittle the President in the eyes of the reading and voting public,” noted historian P.J. Staudenraus. “The reporter scrupulously preserved the President’s confidence, and he did not flaunt his special access to the White House before his readers, but his close association with the chief executive provided him with insights, points of view and unique experiences that newspapermen in an Presidential administration would envy.”2 The country would have been appalled, for example, had Brooks reported an experience he had while visiting with Dr. Anson Henry at the White House on May 6, 1863. Word arrived from General Joseph Hooker’s headquarters about the Battle of Chancellorsville:

“In an hour or so, while the doctor and I sat talking, say about three o’clock in the afternoon, the door opened, and Lincoln came into the room. I shall never forget that picture of despair. He held a telegram in his hand, and he closed the door and came toward us I mechanically noticed that his face, usually sallow, was ashen in hue. The paper on the wall behind him was of the tint known as ‘French gray,’ and even in that moment of sorrow and dread expectation I vaguely took in the thought that the complexion of the anguished President’s visage was almost exactly like that of the wall. He gave me the telegram, and in a voice trembling with emotion, said, ‘Read it – news from the Army.’ The dispatch was from General Butterfield, Hooker’s chief of staff, addressed to the War Department, and was to the effect that the Army had been withdrawn from the south side of the Rappahannock, and was then ‘safely encamped’ in its former position. The appearance of the President, as I read aloud these fateful words, was piteous. Never as long as I knew him, did he seem to be so broken, so dispirited, and so ghostlike. Clasping his hands behind his back, he walked up and down the room, saying ‘My God! My God! What will the country say! What will the country say!’

“He seemed incapable of uttering any other words than these, and afer a little time he hurriedly left the room. Dr. Henry, whose affection for Lincoln was deep and tender, burst into a passion of tears. I consoled him as best I could, and while we were talking and trying to find a gleam of sunshine in this frightful darkness, I saw a carriage drive up to the entrance of the White House, and looking out, beheld the tall form of the President dart into the vehicle, in which sat General Halleck, and drive off. Immediately after, an attendant came to tell us that the President and General Halleck had gone to the Army of the Potomac, and that Mr. Lincoln would return next day, and would like to see me in the evening.3

But although Brooks was often privy to privileged conversations, President Lincoln stonewalled when Brooks tried to determine the President’s position on the renomination of Vice President Hannibal Hamlin on the night before the June 1864 Union Convention in Baltimore. “I had hoped to see Mr. Hamlin renominated, and had anxiously given Mr. Lincoln many opportunities to say whether he preferred the renomination of the Vice-President; but he was craftily and rigidly non-committal, knowing, as he did, what was in my mind concerning Mr. Hamlin.”4

Brooks’ unusual access to the White House allowed him to record some unique descriptions of life among the Lincoln family. They also provided indications of the President’s penchant for story-telling: “When I had been at some pains, one day, to show the President how a California politician had been coerced into telling the truth without knowing it, he said it reminded him of a black barber in Illinois, notorious for lying, who, hearing some of his customers, admiring the planet Jupiter, then shining in the evening sky, said, ‘Sho, I’ve seen that star afore. I seen him ‘way down in Georgy.’ Said the President, ‘Like you California friend, he told the truth, but he thought he was lying.”5

After the President’s assassination Brooks returned to California for a series of editorial positions after an expected appointment as the President’s private secretary was aborted by Lincoln’s death. His appointment had been pushed by Mary Todd Lincoln, with whom he was close and whom he defended in print. Brooks also helped protect Mary Todd Lincoln from a charlatan medium named “Lord” Colchester. Brooks later moved East where he worked for the New York Tribune, the New York Times and the Newark Daily Advertiser. Brooks authored Washington in Lincoln’s Time and Lincoln and the Downfall of American Slavery.