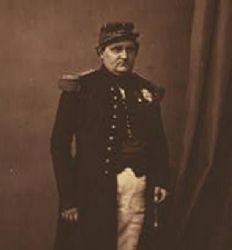 Prince Napolean, called “Plon Plon”, was the Nephew of Napoleon I and cousin of Napoleon III. He visited the White House in early August 1861. His visit to Washington was relatively short compared to the extensive trips that the prince and his entourage made through northern States in the summer and fall. He was an inveterate traveler who was said to be “a good copy of the first Emperor dipped in German grease.” His mother was German and his wife, Princess Clotilde, was the daughter of Italian King Victor Emmanuel II. Together, they lived on the Jerome Napoleon as their permanent, floating hotel. When they visited Washington, they were invited to stay at the White House, but declined.

On August 3, the French visitors—without Princess Clothilde who was left in New York—came to the White House and were presented to Mr. Lincoln in the Blue Room by Secretary of State William Seward. “The Prince, arriving with Baron Mercier [the French ambassador], found no one—neither butler nor doorman— at the main entrance to show him in, or at least to open the door. I do not remember which employee, who happened to be passing by, took care of this duty,” wrote Camille Ferri Pisani, a military aide to Napoleon. “Heaven forbid that I complain of the simplicity of habits and mores of anyone, even of the chief of a great Nation! I cannot, however, prevent myself from noticing that it is illogical to live in a great palace and not to have a doorman. The princely appearance of the White House implies a staff, modest perhaps, but still a staff of servants, butlers, and doormen destined to inhabit this splendid dwelling. Republican austerity is quite compatible with the upkeeping of an ordinary, but still decent household.” Pisani wrote:

“Our meeting was not so gay. The President shook our hands, after sharing the Prince’s. I feared, for a moment, that the interview would end with this silent demonstration. Mr. Lincoln gained a few more minutes by asking the Prince to sit down and by sitting himself, the whole affair being done with a great moving of chairs. But, once these new positions were acquired, the two parties sat opposite each other silently, without troubling to go any further. The Prince, impatient because he had to wait, took a cruel pleasure in remaining silent. Finally, the President took the risk of speaking of Prince Lucien, his father. Mr. Lincoln was on the wrong track and he was warned [Prince Napoleon was Jerome Napoleon’s son, not Lucien’s]. This incident made him lose his confidence, still further. A few words were then exchanged on the rain, the weather and our crossing. The Prince still maintained his polite but cold front—as he customarily does when he does not care to help the conversation. Finally, Mr. Lincoln once more resorted to the handshaking; as we were seven on our side, and they were two on the other, the ceremony lasted long enough so that we soon reached the time limit usually assigned to this kind of meeting. Everyone retired, glad to have completed the official presentation, for these customs are generally boring, and their annoyance is only compensated by the hope for the more intimate and interesting relationships of which they are the necessary prelude.1

After visiting the Capitol, Prince Napoleon returned to the White House that night for a state dinner. On this occasion, it was Mrs. Lincoln who failed to impress Prince Napoleon, who observed: “Mrs. Lincoln was dressed in the French style without any taste; she has the manner of a petit bourgeois and wears tin jewelry.”.2