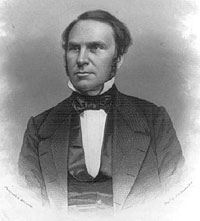 Rev. Phineas D. Gurley was the Pastor of New York Avenue Presbyterian Church in Washington where the Lincolns attended church. He and his wife were frequent guests at the White House. He often brought religious delegations and personal requests to the President. In one letter to President Lincoln on March 13, 1863, Dr. Gurley successfully requested a job for a friend, who was placed at the Treasury Department:

Permit me to commend to your confidence and kindness my highly esteemed friend, Mr. Amos Young. Formerly he resided in Georgetown; now he is residing in this city. Our civil troubles have made his home a desolation. The extent of his losses he himself will tell you, and you can rely with the most implicit confidence upon his every statement. His character is so pure, his loyalty so unwavering, and his need so urgent, that I really hope you will take such an interest in his case as will secure him employment. He is a worthy and suffering servant of Christ, Mr. President, and, as a minister of Christ, I earnestly entreat you to consider his claims and favor his appeal. His habits have such as to give him excellent qualifications for a clerkship.1

More often, according to historian David Rankin Barbee, Dr. Gurley intervened on behalf of Northern or Southern clergymen who had been arrested and imprisoned by the Union army. In one letter to Mr. Lincoln, Dr. Gurley wrote: “Pardon me, Mr. President, for saying that I think the business of suppressing churches with pastors, which the War Department seems disposed to undertake, will not only be difficult and troublesome, but rather injurious than beneficial to the Government.”2

Historian Allen C. Guelzo wrote: “There was much that Lincoln admired in Gurley’s rhetorical gifts as a preacher, and he once remarked to John Hay that it had to be a good sign that Gurley’s ‘faith in ultimate success’ in the war was so vast. Gurley ‘spoke with an authoritative air of sincerity,’ and ‘his preaching was confined with remarkable closeness to the great central doctrines of the cross,’ but, happily, he also managed to stay away from politics. [Government printer] John DeFrees believed that Lincoln ‘had several conversations with the Rev. P.D. Gurley…on the subject of religion,’ and on at least three occasions Lincoln allowed Gurley to present petitions for pardons or appointments. Yet Lincoln never developed a particularly close relationship with Gurley, apart from inviting Gurley to the White House from time to time and allowing Gurley to be generally understood by Washington society as the Lincolns’ pastor.”3 Once when accosted as he left the White House after an early morning meeting, Dr. Gurley explained that he and the President had “been talking of the state of the soul after death. That is a subject of which Mr. Lincoln never tires. This morning, however, I was a listener. Mr. Lincoln did all the talking.” 4

Lincoln chronicler Anthony Pitch wrote of Gurley’s sermon on the day after Lincoln’s death: Dr. Gurley tried hard to make sense of the martyrdom, but it fell short of honest conviction. It was the voice of a preacher made small by the mysteries beyond his knowing….He sounded no surer of understanding than anyone seated before him. So again he appealed for their patience and summoned all to hold fast to their faith. ‘We will wait for this interpretation, and we will wait in faith,’ he concluded.”5 Not everyone appreciated Dr. Gurley’s eloquence. In 1865, the Marquis Adolphe de Chambrun complained to his wife: “We had to submit to an hour’s discourse by Dr. Gurley. He has the sort of eloquence belonging to this denomination; that is, no high-sounding phrases but a stock of dry commonplaces marshaled in good order.”6

Dr. Gurley played an important role at President Lincoln’s deathbed and funeral services. He comforted Mrs. Lincoln during the death watch at the Peterson Home and delivered a brief prayer after Mr. Lincoln died on April 15. After the President died, Dr. Gurley informed Mrs. Lincoln who exclaimed “O – why did you not let me know? Why did you not tell me” He replied: “your friends thought it was not best. You must be resigned to the will of God. You must be calm and trust in God and in your friends.” He accompanied her back to the White House where he had the unenviable task of telling Tad Lincoln that his beloved father was dead. Tad’s grief was so overwhelming, reported Dr. Gurley, that although he had previously maintained his composure, he broke down. About 10 AM he returned home. “I felt as though I had been engaged all night in a terrible Battle and had but just strength enough left to drag myself off the field.”7 Gurley delivered the funeral sermon on April 19 at the White House, saying:

Since the days of Washington, no man was ever so deeply and firmly imbedded and enshrined in the hearts of the people, as Abraham Lincoln; nor was it a mistaken confidence and love. He deserves it all. He merited by his character, by his acts, and by the whole tone and tenor of his life. His integrity was thorough, all pervading, all controlling, and incorruptible. He saw his duty as the chief magistrate of a great and imperilled people, and he determined to do his duty, seeking the guidance and leaning on the arm of Him of Whom it is written: ‘He giveth to the faint, and to them who have no Might he increaseth strength.’ Never shall I forget the emphatic and deep emotion with which he he said, in this very room to a company of clergymen who had called to pay their respect to him in the darkest days of the civil conflict. ‘Gentlemen, my hope of success in this struggle rests on that immutable foundation, the justice and goodness of God, and when events are very threatening, I still hope that in some way all will be on our side.8

Dr. Gurley also said prayers at the Capitol and the Washington train station and again at the graveside in Springfield, Illinois. He also composed a funeral hymn, “Rest, Noble Martyr.”

“It has been reported Lincoln had made arrangements to become a member officially on Easter Day, and that, apart from his assassination, he would have taken this step. Though this is possible, we have no way of verifying the truth of the report. The chief evidence against it is that Dr. Gurley, so far as we know, never mentioned it publicly,” wrote Elton Trueblood in Abraham Lincoln: Theologian of American Anguish.8 In a sermon delivered six weeks after the President’s murder, Dr. Gurley told a story: “It is said that when the multitudes were looking upon the remains of our departed President in Philadelphia, a venerable and intelligent colored woman came up, and having gazed for a moment upon the faded form as it lay silent and lifeless in its coffin, she clasped her hands in agony, while her tears were flowing fast, and exclaimed with a loud voice, ‘O, Abraham Lincoln! Are you dead? Are you dead? You may imagine, if you can, but I cannot undertake to describe the effect of this exclamation upon all who heard it. May a time with the last few weeks have we all felt as she felt, and our hearts, if not our lips, have said, ‘O, Abraham Lincoln! Are you dead? Are you dead?’ Yes, he is dead; and his death has plunged us into the lowest depths of sorrow.”10

In February 1862, Mrs. Gurley had helped nurse Rebecca Pomeroy care for Tad Lincoln after Willie’s death until she was relieved by Mary Welles.

Dr. Gurley had been appointed Senate chaplain in 1858 and had previously served a congregation in Dayton, Ohio. Before she left the White House, Mrs. Lincoln arranged to have her late husband’s hat sent to Dr. Gurley. She got very upset later in the year when she discovered he had not received it. Dr. Gurley continued to serve as pastor of the New York Avenue Presbyterian Church until his death in 1868 and spent the last two years as moderator of the Presbyterian Church USA.