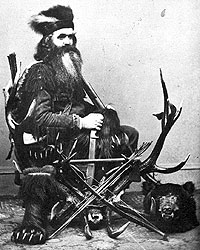 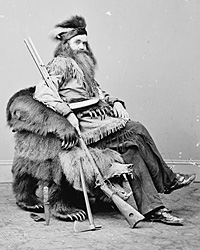 California hunter whose presentation of an elkhorn chair to the President on November 26, 1864 attracted wide publicity. Kinman had a penchant for western buckskin clothes and eastern publicity.

Journalist Noah Brooks reviewed a list of gifts received by President Lincoln and reported: “The latest present is one which has been brought from California by an old trapper, whose name I have vexatiously forgotten. The gift is a chair of buckhorns, with the branching antlers interlaced to form the back, seat and arms. It is an unique affair, and much like one the same trapper gave to Buchanan four or five years ago.”1

Lincoln scholar Stanley Kimmel wrote that after presenting the chair and explaining the seven years of hunting that went into its production, Kinman told “the President that he had another little keepsake with him in the form of a fiddle made from the skull of his favorite mule, which, when alive, appeared to have music in his soul, for he would always look around the camps on the plains when he heard music. After the mule had been dead for some time, he passed his bleached bones one day and the idea struck him that there might be music in the bones, so he made the fiddle. Later he took a rib, and some hairs from the tail, and made the bow. Much to the amusement of Lincoln and other spectators, he played ‘Essence of Old Virginia’ and ‘John Brown’ on the bones of the mule. Lincoln said that if he could play the fiddle he would ask him for it, but since he could not, the fiddle would be better off in Mr. Kinman’s hands.”2