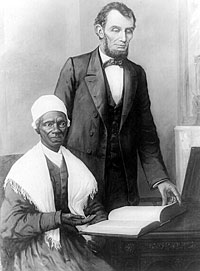 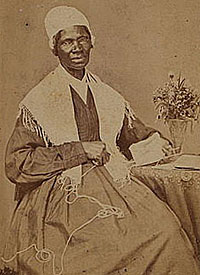 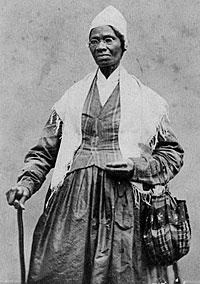 Christened Isabella Baumfree, Sojourner Truth was a Black abolitionist, who developed attitudes more favorable towards President Lincoln than some of her colleagues.

“Hoping to visit Lincoln, Sojourner, when she was about sixty-seven years old, made a long, round-about journey from Battle Creek, Michigan, which was then her home, to Washington, D.C. After she arrived, she found to her surprise that she was unable on her own to secure an appointment to visit Lincoln. Sojourner then asked Lucy Colman—a white, Massachusetts-born schoolteacher who had become an anti-slavery lecturer—to arrange it for her. After some weeks, Mrs. Colman, using Mrs. Lincoln’s black dressmaker as a go-between, succeeded in arranging an appointment. When Mrs. Colman finally took Sojourner to the White House on 29 October, [1864] the two women had to wait several hours until it was their turn to see the busy president. Having every expectation of being welcomed, they were not ‘sitting-in’ in protest,” wrote historian Carleton Mabee.1

Sojourner Truth herself said: “Upon entering his reception room we found about a dozen persons in waiting, among them two coloured women. I had quite a pleasant time waiting until he was disengaged, and enjoyed his conversation with others; he showed as much kindness and consideration to the colored persons as to the white. One case was that of a colored woman who was sick and likely to be turned out of her house on account of her inability to pay her rent. The president listened to her with much attention, and spoke to her with kindness and tenderness.”2

British journalist Fred Tomkins said that on February 25, 1865 Sojourner Truth was denied admission to the White House and that when he mentioned it to Mr. Lincoln, he “expressed his sorrow, and said that he had often seen her, (and] that it should not occur again.” Historian Mabee maintains that “available evidence indicates that although Sojourner was not welcomed at Lincoln’s White House as quickly as she would have liked, nor always welcomed, nor clearly welcomed with ‘reverence,’ at least she was welcomed once, and probably more often.” 3