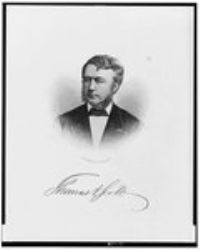 Appointed Assistant Secretary of War in August 1861 by President Lincoln. As vice president of the Pennsylvania Railroad in February 1861, Scott was called upon to take part of the deception that allowed President-elect Lincoln to disappear from Harrisburg, Pennsylvania, and return to Philadelphia where Lincoln took the overnight train to Washington. Previous to Scott’s administration appointment, he recruited and set up the War Department telegraph office near the White House. The Union was fortunate to have a number of highly skilled railroad executives like Scott and Herman Haupt who were recruited for military affairs at the beginning of the Civil War. Historian Richard White called Scott “the quintessential railroad man of his generation.”1 It was Scott who determined the rates that railroads charged for transporting freight and troops.

Congressman Albert G. Riddle described Scott: “Slight but symmetrical, with a face as sharply and beautifully cut as a cameo, he was the embodiment of energy, intellect, and wise unerring judgment. Whenever he was to be found in the office, what a relief to deal with him, with his electric brain and cool, quiet manner.”2

Scott was first recruited by Pennsylvania Governor Andrew G. Curtin to help with railroad issues at the outset of the war. According to Civil War telegraph operator William Bender Wilson, “President Lincoln, through Secretary of War Cameron, summoned Thomas A. Scott, then vice president of the Pennsylvania Railroad Co., to Washington to take charge of military railroads and telegraphs. He reached Washington on the 26th, preceded by four telegraph operators from off his line of railroad ordered there by his principal assistant, Andrew Carnegie.” Wilson wrote that the size of the military telegraph operation ballooned from just a few miles to “over 15,000 miles of wire had been…laid within Army lines and 1,500 young Americans called upon to operate them.”3

On August 3, 1861. Scott was named assistant secretary of war. Given the general ineffectiveness of Secretary of War Cameron, Scott’s importance was magnified. Scott became the go-to guy when the secretary of the army was absent. As Lincoln aide John Hay reported in a newspaper article in October 1861, visitors to the War Office were “better [to] see Colonel Scott – he will attend to your business.”4 In addition to handling the railroads, noted historian Robert V. Bruce, Cameron entrusted Scott to handle the purchase of munitions: “Though Cameron gave him standing instructions to consult [General James Wolfe] Ripley on quality and price, Scott wrote off the Chief of Ordnance as a querulous old fogy, remarking that ‘if the gun business were left to General Ripley, the government would get no guns.'”5

Historian Richard White wrote: “Tom Scott’s aptitude for organizing railroads made him an ideal candidate for government service, and he served his country well in the days following Fort Sumter when Confederate troops and Baltimore mobs threatened to cut off Washington from the North by severing the Baltimore and Ohio Railroad. In the dangerous and fearful early days of the war Scott, acting first as an adviser to the government and later as an official in the War Department, reorganized and rerouted the railroads serving Washington, forging the competing northern lines that served the capital into a coherent system.”6

In January 1862, Scott played a role in mollifying Secretary of War Cameron after Cameron became offended by President Lincoln’s handling of his resignation. Pennsylvania political leader Alexander K. McClure remembered: “Lincoln sent his letter to Cameron by [Treasury Secretary Salmon P.] Chase, who met Cameron late in the evening after he had dined with Colonel [John] Forney, and he delivered the letter in entire ignorance of its contents. I happened to be spending the evening with Colonel Thomas A. Scott, then Cameron’s Assistant Secretary of War, when Cameron came in near the midnight hour and exhibited an extraordinary degree of emotion. He laid the letter down upon Scott’s table, and invited us both to read it, saying that it meant personal as well as political destruction, and was an irretrievable wrong committed upon him by the President. We were not then, and indeed never had been, in political sympathy, but our friendly personal relations had never been interrupted. He appealed to me, saying: “This is not a political affair; it means personal degradation; and while we do not agree politically, you know I would gladly aid you personally if it were in my power.” Cameron was affected even to tears, and wept bitterly over what he regarded as a personal affront from Lincoln. I remember not only the substance of Lincoln’s letter, but its language, almost, if not quite, literally, as follows: “I have this day nominated Hon. Edwin M. Stanton to be Secretary of War and you to be Minister Plenipotentiary to Russia.” Although the message did not go to the Senate that day, it had been prepared and was sent in pursuance of that notice. Colonel Scott, who was a man of great versatility of resources, at once suggested that Lincoln did not intend personal offense to Cameron, and in that I fully agreed; and it was then and there arranged that on the following day Lincoln should be asked to withdraw the offensive letter; to permit Cameron to antedate a letter of resignation, and for Lincoln to write a kind acceptance of the same. The letter delivered by Chase was recalled; a new correspondence was prepared, and a month later given to the public.”7

Scott’s authority at the War Department lessened under Stanton, Scott clashed with Assistant Secretary of War Peter H. Watson, Stanton’s law partner who was named shortly after Stanton took office. Historian Samuel Richey Kamm wrote that after Cameron’s departure, Scott’s relations with Stanton were strained as the importance of other railroads increased and that of the Penn Central reduced. Scott spent much of April and May checking on Union military forces in the West where Scott heard of criticism of him. “I have learned with great pain that certain parties have been industriously at work during my absence to injure my character by all kinds of insinuations and charges – in reply to all of which permit me to say that admits all the trials and perplexities of the past year in connection with the organization of the immense army…I have endeavored to do my duty faithfully and to the best of my ability without hope of reward beyond the limited salary fixed as my compensation,” wrote Scott to Stanton. “I shall manage by my future life to live down all such charges and possibly to reward the originators as they deserve.” In May of 1862, Scott resigned and returned to the Pennsylvania Central when the railroad’s president wrote Scott that he wanted Scott to take charge while he went to Europe.8

Before Scott left Washington on June 2, 1862, he stopped at the White House and left a note: “I called to see you this morning to say “good bye” and to thank you for past Courtesy and Kindness — but finding you besieged by the Million I leave this note instead – I shall start for Philadelphia this afternoon to renew my official connection with the Penna Rrd[.] It may happen before the close of this rebellion that I can render you some special service – without seriously interfering with my Railway duties – if so an intimation from you will be sufficient.”9

The occasion for such assistance came over a year later. Despite the differences, it was Watson who in September 1863 called on Scott to take charge of the crucial movement of 23,000 Union troops from the Virginia front to eastern Tennessee by railroad. Telegraph operator Homer Bates wrote that Scott arrived at the War Department early on the afternoon of September 24. “After reading [Major Thomas] Eckert’s report and learning what had already been done, and listening to Stanton’s impassioned appeals for haste, Scott quietly remarked, in his quick decisive manner, that Eckert’s time could be met and the transfer effected — perhaps sooner than fifteen days. To those now living who knew Thomas A. Scott in his prime, such a statement will convey a work of meaning.” Scott left soon thereafter for Louisville, Kentucky to direct the railroad operations. “Tell me how things have advanced,” wrote Lincoln to Scott on October 1. A few days later, Secretary Stanton telegraphed him: “Your work is most brilliant. A thousand thanks. It is a great achievement.”10

Before the Civil War, Scott had risen through the ranks at the Pennsylvania Railroad from ticket agent to general superintendent. After the war Scott became its president.