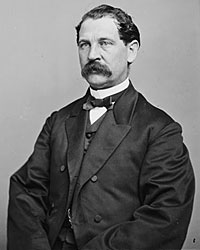 Thomas T. Eckert was an Army major, telegraph superintendent of the War Department and trusted emissary of the President. President Lincoln prevented Secretary of War Edwin M. Stanton from firing Eckert in early 1862. Before Stanton took office, telegrams regularly went first to General George McClellan rather than to the Secretary of War. Eckert was charged with neglecting his duties, charges the hard-working man hotly denied. He then tendered his resignation. “Just then Eckert felt an arm placed on his shoulder, and supposing it to be that of Sanford, who had all this time remained standing with him, turned round, and was surprised to find that, instead, it was the hand of the President, who had entered the room while the discussion was going on,” wrote Eckert’s telegraph room colleague, David Homer Bates:

Lincoln, still with his hand on the captain’s shoulder, said to Stanton: ‘Mr. Secretary, I think you must be mistaken about this young man neglecting his duties, for I have been a daily caller at General McClellan’s headquarter for the last three or four months, and I have always found Eckert at his post. I have been there often before breakfast, and in the evening as well, and frequently late at night, and several times before daylight, to get the latest news from the army. Eckert was always there, and I never observed any reporters or outsiders in the office.”
Governor Brough of Ohio, who had known Eckert before, in connection with a telegraph line on Brough’s (Bellefontaine) railroad in Ohio, which Eckert had inspected and rebuilt about 1857, happened to be in the Secretary’s room while Eckert was uttering his denial of the charges against him, and after Lincoln had finished his statement, Brough went up to Eckert, took his hand, and addressed him in a most cordial manner. Then turning to Stanton, he told him that he would vouch for anything that Eckert would say or do; that he believed him to be the ablest and most loyal man who could be selected for the place.

Stanton then tore up Eckert’s resignation and apologized and promoted him to major on the spot. But the end of the war, Eckert’s status had been raised to assistant secretary. On the day following the confrontation, Stanton had all telegraph operations centralized at the War Department—to the annoyance of General McClellan.1

Eckert thought his job was jeopardized on another occasion late on December 15, 1864 when the telegraph office received a telegraph from Tennessee with news of General George Thomas’s victory at the Battle of Nashville at the same time he was tasked with sending a telegram from General Ulysses S. Grant removing Thomas from command. Instead of sending the Grant telegram, Eckert rushed to the home of Secretary of War Edwin M. Stanton. “Mister Secretary, I fear that I have violated a military rule and have placed myself in a position to be court-martialed,” Eckert told Stanton. Stanton replied: “Major, if they court-martial you, they will have to court-martial me. You are my confidential assistant, and in my absence you were empowered to act in all telegraph matters as if you were the Secretary of War. The result shows you did right.”” Eckert’s news was soon related to President Lincoln: “Eckert says he will never forget the tall, ghostly form of Lincoln in his night-dress, with a lighted candle in his hands, as he appeared at the head of the second story landing when the two callers were ushered up-stairs by the doorkeeper.” The orders from Grant, who was about to leave for Tennessee, were soon nullified. President Lincoln heartily approved of Eckert’s conduct.2

It was Eckert who notified President Lincoln of his nomination by the Union convention meeting in Baltimore. According to journalist Noah Brooks, “It turned out that the President, having business at the War Department, met Major Eckert, superintendent of the military bureau of telegraphs, who congratulated him on his nomination. ‘What! Am I renominated?’ asked the surprised chief. When assured that this had been done, Mr. Lincoln expressed his gratification, and asked Major Eckert if he would kindly send word over to the White House when the name of the candidate for Vice-President should have been agreed upon. Lincoln, later, was informed by Major Eckert that [Andrew] Johnson had been nominated, and (as the President himself subsequently told me) made an exclamation that emphatically indicated his disappointment thereat. Major Eckert afterward confirmed this statement with a hearty laugh.”3

On April 3, 1865, a presidential telegram “From Richmond” sent War Department telegraph operators to the windows to shout “Richmond has fallen!” — spreading the news across Washington. “In four minutes there were thousands of people around the Department,” reported the 16-year-old youth who took down the telegram. “The streets filled from every direction. Horse cars had no show; steam fire-engines came out on the avenue, bunched themselves, and commenced whistling; cannon planted in the park close by began firing; and men, women, and children yelled themselves hoarse and acted ridiculous.”4

Eckert’s friendship with President Lincoln led to an invitation to accompany the President to Ford’s Theater the night of his assassination, April 14. President Lincoln visited the War Department before he went to the theater. He had been unable to prevail on either Edwin Stanton or Ulysses S. Grant to go to Ford’s Theater with Mrs. Lincoln and their wives. Grant had initially agreed to go but his wife convinced him to reconsider because her last experience with Mrs. Lincoln had been highly unpleasant. In an attempt to dissuade the President from attending, Secretary of War Stanton forbade Eckert from attending. Telegraph operator Homer Bates later recorded the events of the President’s last day of life:

On the morning of the 14th, Lincoln made his usual visit to the War Department and told Stanton that Grant had cancelled his engagement for that evening. The stern and cautious Secretary again urged the President to give up the theater-party, and, when he found he was set on going, told him he ought to have a competent guard. Lincoln said: “Stanton, do you know that Eckert can break a poker over his arm?”
Stanton, not knowing what was coming, looked around in surprise and answered, “No, why do you ask such a question?” Lincoln said: “Well, Stanton, I have seen Eckert break five pokers, one after the other, over his arm, and I am thinking he would be the kind of man to go with me this evening. May I take him?”
Stanton, still unwilling to encourage the theater project, said that he had some important work for Eckert that evening, and could not spare him. Lincoln replied: “Well, I will ask the Major myself, and he can do your work tomorrow.” He then went into the cipher-room, told Eckert of his plans for the evening, and said he wanted him to be one of the party, but that Stanton said he could not spare him. “Now, Major,” he added, “come along. You can do Stanton’s work to-morrow, and Mrs. Lincoln and I want you with us.”
Eckert thanked the President but, knowing Stanton’s views, and that Grant had been induced to decline, [said] to the President he could not accept because the work which the Secretary referred to must be done that evening, and could not be put off.
“Very well,” Lincoln then said, “I shall take Major [Henry] Rathbone along, because Stanton insists upon having some one to protect me; but I should much rather have you, Major, since I know you can break a poker over your arm.”5

That night, Eckert rushed back to the War Department when he was notified of the assassination by one of the telegraph office employees. He telegraphed General Ulysses S. Grant: “The President was assassinated at Ford’s Theatre at 10 30 tonight & cannot live. The wound is a Pistol shot through the head. Secretary Seward & his son Frederick, were also assassinated at their resident & are in a dangerous condition. The Secretary of War desires that you return to Washington immediately. Please answer on receipt of this.”6