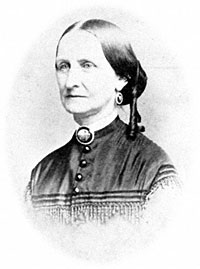 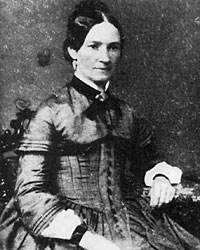 Like many of Mary Lincoln’s relatives, Elizabeth Edwards came to Washington for the First Inauguration in March 1861. She stayed at the White House along with her daughters, Julia Baker and Elizabeth Edwards and two half-sisters. Unlike cousin Elizabeth Grimsley, however, Mrs. Edwards soon returned to Illinois.

The President’s sister-in-law was pressed into service by the President’s son Robert in order to console his mother after Willie’s death in February 1862. She arrived in late February and was picked up at the train station by Illinois Senator Orville H. Browning. He persistently urged her to stay in Washington saying, “you have such a power & control, such an influence over Mary.”1 “Beneath what the world saw lurked a nature as tended and poetic as any I ever knew. The death of his son Willie…made a deep impression on him,” she later told Lincoln biographer and law partner William Herndon. “On the evening we strolled through [Lafayette Park] he spoke of its with deep feeling, and he frequently afterward referred to it. When I announced my intention of leaving Washington he was much affected at the news of my departure. We were strolling through the White House grounds, when he begged me with tears in his eyes to remain longer.”2 Mrs. Edwards left in April and army nurse Rebecca Pomroy was engaged as a companion for Mary Lincoln.

Mrs. Edward said that when Mr. Lincoln was “alone or in the company of a close friend, and released from the restraint of his official surroundings, he was wont to throw from his shoulders many a burden. He was a man I loved and respected. He was a good man, an honest and true one. Much of his seeming disregard, which has been tortured into ingratitude, was due to his peculiar construction. His habits, like himself, were odd and wholly irregular. He would move around in a vague, abstracted way, as if unconscious of his own or anyone else’s existence.”3

“During the Edwardes’ visit Lincoln suggested that Mrs. Edwards make up a party of Springfield folk for a visit to Mount Vernon. So next morning the President and Mrs. Lincoln, Marshal and Mrs. Lamon and Lamon’s brother, Robert, Mrs. Milton Hay, who was visiting the capital, Mrs. and Mrs. Edwards, and one or two others met at the navy yard at ten o’clock and boarded a government steamer. Passing the arsenal and Fort Washington, they arrived at Mount Vernon about twelve thirty and spent a delightful hour and a half visiting Washington’s tomb and wandering through the mansion and gardens,” wrote historian Benjamin Thomas4 Mary Hay, aunt of John Hay, wrote her husband: “The President looks much as he did when he left Springfield – and tells jokes yet. I had the happiness of sitting by him – and conversing with him for some time – but, did not know how to flatter his vanity as some others did.”5

Elizabeth’s relationship with her sister was rocky. During the White House years, Mary came came to despise Elizabeth’s daughter, Julia Edwards Baker, who was mentally unstable. Elizabeth recalled that the First Lady “opened a private letter of mine after I left Washington & because in that letter my Daughter gave me her opinion of Mrs L[.] She became Enraged at me. I tried to Explain – She would Send back my letters with insulting remarks.” The President, on the other hand, teared up when she left in 1862. He said to her: “do Stay with me – you have Such a power & control[.] Such an influence over Mary – Come do Stay and Console me.’”6

Elizabeth’s husband was a source of embarrassment to the President. Mr. Lincoln had appointed Ninian Edwards as an Army paymaster despite his Democratic politics. Orville H. Browning pressed Edwards’ case and reported back: “Of course a vast number of applications are being continually made to me by those who want appointments, but I have not annoyed the president, and have demanded nothing from him. In your behalf I will tell him to give you something worthy of acceptance and charge it to me – to say if he chooses, that I demanded it, and put all the responsibility on me.”7

He subsequently was accused of corruption by the President’s associates in Illinois. Charges of personal enrichment and partisan treachery led to his resignation in 1863. Ninian had many critics – for his performance and his politics. One critic wrote President Lincoln in January 1864 that “Mr. E. himself is a reader of the Chicago Times. Now I saw it with all the authority of a man of no consequence, that any man who does not repudiate and loathe the Times is a villainous traitor at least.”8

Ninian was the son of the first governor of State of Illinois and served briefly as Illinois Attorney General during Lincoln’s first term in Vandalia. Elizabeth Todd had met Ninian Wirt Edwards when he came to Lexington to study law at Transylvania College. They married on February 14, 1832 in Lexington where they stayed until Ninian completed in law studies. Shortly thereafter, Ninian’s father died and he moved back to Illinois, settling in Springfield by 1835. Historian Stephen Berry wrote: “Ninian Edwards would serve the state legislature off and on in one capacity or another for more than twenty years. But he was a ‘thousand things’ short of Lincoln….he would occasionally resent Lincoln’s success, but he would always, if grudgingly, recognize his superiority. Within the first year, he had talked so much of Lincoln that his wife and her sister Frances, who was visiting, demanded that he bring the man by.”9

With Lincoln, Ninian constituted one of the Whig “Long Nine” from Sangamon County State Legislature in mid-1830s. Aristocratic, vain, hot-tempered and egotistical, he was not renominated by Whigs in 1840. He and his wife Elizabeth opposed the marriage between Mary Todd and Abraham Lincoln. Ninian Edwards later was elected as a state senator, again as a state representative and as state superintendent of instruction in 1854. Later, having become a Democrat in 1851, he opposed Lincoln’s campaign for the Senate in 1858 and President in 1860. Nevertheless, he repeatedly sought the Lincolns’ assistance. He and his family were frequently in financial difficulty and were alienated from the Lincolns after Ninian was removed from office. Despite their rocky relationship, the Edwards rescued Mary Lincoln from the insane asylum to which she had been committed in 1875 and took her home in 1876. It was at their home in 1882 that Mary Todd Lincoln died.

The relationship between the Edwards and the Lincolns was never easy. As historian Stephen Berry observed, Elizabeth “had always thought her brother-in-law an odd duck. It bothered her, for instance that he didn’t seem to appreciate how much he and Ninian had done to further his career. But she had for Lincoln something didn’t have for her sister: respect. And she respected the fact that Lincoln’s heart was unstrung.”10