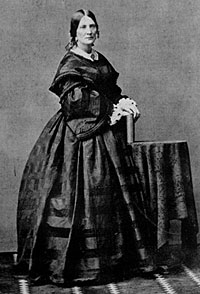 “Cousin Lizzie,” Mary Todd Lincoln’s cousin, came to the White House with the Lincolns and described her temporary home as being “in a perfect state of readiness for the incomers—A competent chef, with efficient butler and waiters.”1 Mary Todd Lincoln was fond her cousin: “She is a noble, good woman & has been purified, through much trial.”sup>2

Mrs. Lincoln prevailed on her cousin to delay her departure from Washington as long as possible. “Whenever I mention my return home Mary instantly objects,” she wrote cousin John Todd Stuart. Writing later about her six months in the White House, Mrs. Grimsley recalled how her duties came in to include taking care of Willie and Tad, who contracted measles while visiting soldiers in their camps: “The mother, always over-anxious and worried about the boys and withal not a skillful nurse, was totally unfitted for caring for them. They disliked their attendant maid, and by degrees, I was inveigled into the nursery, and by way of a pet name, was dubbed ‘Grandmother,’ though a younger woman than the mother.”3

Another relative (through Mrs. Lincoln’s stepmother), former Vice President John C. Breckinridge, took a different approach when he visited the White House in the spring of 1861. Like Mrs. Lincoln, he was a Kentuckian with a tendency toward biting sarcasm. Unlike Mrs. Lincoln, Breckinridge sided with the Confederacy and told their mutual cousin: “Cousin Lizzie, I would not like you to be disappointed in your expected stay at the White House, so I will now invite you to remain here as a guest, when the Confederation takes possession.”4

The President was worried, however, at Grimsley’s—and Mary’s—desire that she be appointed as Springfield’s postmaster, which John Todd Stuart indicated would cause problems in Springfield. Aide John Nicolay wrote Illinois Secretary of State Ozias M. Hatch suggested that Grimsley might be a good compromise choice: “Wouldn’t the other aspirants there be more easily reconciled to be beaten by a woman than by one of themselves?”5 The President wrote Stuart on March 30, 1861, about his problems finding jobs for his friends and family:

Cousin Lizzie shows me your letter of the 27th. The suggestion of giving her the Springfield Post-office troubles me. You see I have already appointed William Jayne a territorial governor, and Judge Trumbulls brother to a Land-office. Will it do for me to go on and justify the declaration that Trumbull and I have divided out all the offices among our relatives? Dr. [William Wallace, another Lincoln brother-in-law], you know, is needy, and looks to me; and I personally owe him much.

I see by the papers; a vote is to be taken as to the Post-office. Could you not set up Lizzie and beat them all? She, being here, need know nothing of it, & therefore there would be indelicacy on her part.6

Elizabeth Grimsley herself claimed her ambitions were more modest, writing a few days earlier on March 20, 1861 that “The rush for office continues unabated the applicants being more than the offices. Dr [Samuel Long] goes out as commissioner to one of the Sandwich islands. He has telegraphed for his wife to come directly on. Beecher Todd is to be post-master in Lexington, Ky. And [Thomas Campbell] in Bonnville. The papers announce the presence of 100 Todds and all wanting office. Levi Todd has been here. I think Brother John will fail in getting Wm. Jayne appointed governor. The other appointments he wishes will be made. I have heard nothing about my appointment as post-mistress except Mary often suggests it is to be. I have said nothing at all to Mr. Lincoln about it. Mary can have no influence with him in regard to her friends and of course I would expect nothing.”7

Grimsley went on shopping trips with Mary to Philadelphia and New York and was present with Mary, Willie and Tad in June 1861 when their carriage had an accident. “I am confident had it not been for General [Hiram] Walbridge who was with us, that Taddy would have been crushed by the wheel. You will certainly think Mary and I have changed characters as the papers represent her as acting with great coolness while I had to be assisted from the carriage. So much for reporters,” she wrote Stuart.8 When she returned to Springfield in the fall, President Lincoln “put his arm around me with a fervent ‘God bless you, my cousin’” and “wrung my hand and watched me as I descended the stairs, where found all the servants and messengers congregated to bid me ‘farewell’.”9

Mrs. Grimsley herself never got a job. In August 1863, President Lincoln appointed Grimsley’s son to the Naval Academy, but he failed to fulfill entrance requirements. After 1864 election, Mrs. Grimsley renewed her request to be appointed postmaster of Springfield. Mary Lincoln wrote a friend that Lizzie was a “noble, good woman & has been purified, through much trial….”10

Before he left for Washington, President-elect Lincoln gave Elizabeth Grimsley some of his important papers. Her maid subsequently burned many of them.11 Elizabeth had a strong relationship with Robert Todd Lincoln whom she described as “A manly, dignified youth, unspoiled by petting and adulation, and giving promise of the man into which he has to develop.”12 When Mrs. Grimsley was finally allowed to depart the White House in the summer of 1861, she was escorted by Robert and his mother to Niagara Falls. Before Robert Todd Lincoln left Washington for his father’s interment, he wrote Elizabeth Grimsley: “I leave this P.M. for Springfield and will be your guest while in town.”13