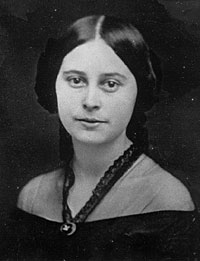 Half-sister of Mary Todd Lincoln, Emilie (Emily) Todd Helm first came to the White House in December 1863, accompanied by her daughter Katherine. In March 1861, President Lincoln had offered her husband, Ben Hardin Helm, the job of army paymaster, which he declined. He instead became a confederate general. (Most of the children of the second marriage of Mary’s father sided with the Confederacy.) Emilie arrived at the White House after her husband’s death in the Battle of Chickamauga in 1863. Judge David Davis recalled: “I never saw Mr. Lincoln more moved,’ said Senator David Davis, ‘than when he heard of the death of his young brother-in-law Ben Hardin Helm, only thirty-two years old, at Chickamauga. I called to see him about four o’clock on the 22nd of September; I found him in the greatest grief. ‘Davis,’ said he, ‘I feel as David of old did when he was told of the death of Absalom.’ I saw how grief stricken he was so I closed the door and left him alone.”1On December 13, 1863 John Hay recorded that Mrs. Helm “just arrived from Secessia.”sup>2

Emilie visited again in the summer of 1864. She was brought to the White House under the President’s direct orders after she declined to attest to her loyalty to the Union when detained at Fort Monroe in Virginia. She recalled in her diary: “Mr. Lincoln and my sister met me with the warmest affection, we were all too grief-stricken at first for speech. I have lost my husband, they have lost their fine little son Willie and Mary and I have lost three brothers in the Confederate service. We could only embrace each other in silence and tears. Sister and I dined intimately, alone. Our tears gathered silently and feel unheeded as with choking voices we tried to talk of immaterial things.”3

The Lincolns had long had a special fondness for her. Mary found in her sister someone in whom she could confide her torments. “She and Brother Lincoln pet me as if I were a child, and without words, try to comfort me,” Emilie wrote. “Kiss me, Emilie, and tell me that you love me,” Mrs. Lincoln told her half-sister one morning. “I seem to be the scape-goat for both North and South.”4 At that point, President Lincoln entered the room and said: “I hope you two are planning some mischief.’ Mr. Lincoln told Emilie later that day: “Little Sister, I hope you can come up and spend the summer with us at the Soldiers’ Home; you and Mary love each other – it is good for her to have you with her – I feel worried about Mary, her nerves have gone to pieces; she cannot hide from me that the strain she had been under has been too much for her mental as well as her physical health.” Both Lincolns expressed separate concerns to Emilie about the other’s mental and physical health.

President Lincoln was very solicitous of Emilie and defended her presence at the White House against political attacks. Emilie later recalled: “Mr. Lincoln in the intimate talks we had was very much affected over the misfortunes of our family; and of my husband he said, ‘You know, Little Sister, I tried to have Ben come with me. I hope you do not feel any bitterness or that I am in any way to blame for all this sorrow.’ I answered it was ‘the fortune of war’ and that while my husband loved him and had been deeply grateful to him for his generous offer to make him an officer in the Federal Army, he had to follow his conscience and that for weal or woe he felt he must side with his own people. Mr. Lincoln put his arms around me and we both wept.”5

Although the sisters shared their sorrows, Emilie was very uncomfortable at the White House and the sisters’ children quarreled over who was the President of the country—Jefferson Davis or Abraham Lincoln. Emilie’s presence drew criticism to herself and the President; she remained an unregenerate rebel. When she was confronted by a U.S. Senator who said that “We have whipped the rebels at Chattanooga, and I hear the scoundrels ran liked scared rabbits,” Mrs. Helm responded: “It was the example you set them at Bull Run and Manassas.” Her pass through Union lines was later revoked by the President, but on December 8, 1863 she took the following oath of allegiance:

After she returned to Lexington, she wrote the President, asking to send clothing to Confederate prisoners at Camp Douglas outside Chicago. She concluded the letter: “I hope I am not intruding too much upon your kindness and will try not to overstep the limits that I should keep.”7 In August 1864, Mr. Lincoln wrote Gen. Stephen G. Burbridge that his sister-in-law had no protection against prosecution for disloyal actions: “If the paper given her by me can be construed to give her protection for such words so, it is hereby revoked pro tanto. Deal with her for current conduct, just as you would any other.”8 That didn’t stop Emilie from requesting another pass in November 1864 to sell her cotton. “I have been a quiet citizen and request only the right which humanity and justice always gives to widows and orphans. I also would remind you that your minié bullets have made us what we are,” she wrote President Lincoln.9

The impertinent request was not granted, but it was not the only one that came from Mary’s relatives. Emilie’s sister, Martha Todd White, also got a presidential pass to come North. However, she received no invitation to the White House despite repeated requests in early 1864. When her Confederate sympathies threatened to become a scandal in Washington, the President let her know that either she left the capital immediately or she would be confined in Old Capitol Prison. Martha returned later, this time unsuccessfully seeking a permit to export cotton from the South. Gideon Welles recorded in his April 29,1864 diary how President Lincoln reacted:

The President to-day related to two or three of us the circumstances connected with his giving a pass to the half-sister of his wife, Mrs. White. He gave the details with frankness, and without disguise. I will not go into them all, though they do him credit on a subject of scandal and abuse. The papers have assailed him for giving a pass to Mrs. White to carry merchandise. Briefly, Mrs. W. called at the White House and sent in her card to Mrs. Lincoln, her sister, who declined to receive or see her. Mrs. W. two or three times repeated these applications to Mrs. L. and the President, with the same result. The President sent a pass, such as in some cases he has given, for her to proceed South. She sent it back with a request that she might take trunks without being examined. The President refused. She then showed her pass and talked ‘secesh’ at the hotel, and made application through Mallory first and then Brutus Clay. The President refused the former and told Brutus that if Mrs. W. did not leave forthwith she might expect to find herself within twenty-four hours in the Old Capitol Prison.10

Elizabeth Grimsley remembered later: “The sister, a wonderfully bright and prepossessing woman from Alabama, won hearts and confidence, and went through the lines, carrying her weight, almost, in quinine, a veritable bonanza to the Southern Army. Moreover, ‘adding insult to injury’ by telling with great vim the story of her outwitting her to credulous ‘brother Lincoln’.”11

Martha’s niece, Katherine Helm, later maintained: “Mrs. White was accused of smuggling quinine through the lines for sick Southern soldiers, but except for a small one-ounce package for her own use she was guiltless of this charge. The true story is this: ‘Mattie’ Todd was a brilliant young woman, more than usually attractive, and in appearance, mind and manner more like Mary Lincoln than any of her sisters. She was a great favorite with her brother-in-law. Her visits to Washington were frequent and as President Lincoln did not wish the war to interrupt them he gave her a pass which would admit her through the lines at any point she chose.” During one Washington visit, friends smuggled a new uniform for Robert E. Lee into her luggage. She later discovered it and despite her chagrin, it was delivered to the Confederate general.12

Mrs. Helm caused another embarrassment to the Lincolns in early 1865 when she arranged to have an Illinois General, John Singleton, help get 500 bales of cotton through Union lines for sale. Singleton, according to Edwin Stanton biographer Fletcher Pratt, “said he would have to have a trading permit to do so. This was the background of the January blank check permit. But when the trader came back from a first visit to Richmond on January 30, he already had the $7,000,000 option, and was intending to get financial backing to make use of it. How Lincoln found this out is uncertain; but he did find it out and was so started that he wrote the letter making any arrangement subject to [Ulysses S. Grant’s] approval. Grant also was apparently deceived as to the extent of the operation and did give a qualified approval.” Stanton found out about the arrangement from former Senator Orville Browning. “It is not certain who made the final arrangement, and Stanton may have had no more part in it than hushing the whole business up, but the way it was worked out was for Mrs. Helm herself to come through the lines, while Grant gave orders that her property was not to be harmed.”13