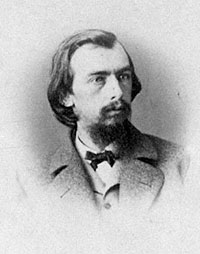 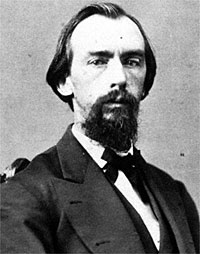 Private Secretary to President Lincoln, John Nicolay subsequently co-authored Abraham Lincoln: A History with John Hay. He wrote The Outbreak of Rebellion on his own. Nicolay was a former journalist with the Pike County Sucker and Pittsfield Free Press and a clerk to the Illinois Secretary of State (where he was in charge of the election records) at the time of Lincoln’s nomination for President. He served as a one-man transition committee for the Lincoln’s move into the White House. Signing his appointment was President Lincoln’s first official act after inauguration. Nicolay’s assistant William Stoddard wrote that he had “vast power for good or evil which is placed in the hands of a man constantly in the President’s confidence, able at any time to ‘obtain his ear,’ sure to be listened to without suspicion or prejudice, and always in possession of current State secrets.”1

Nicolay himself persuaded the President-elect that assistance would be needed in Washington and that John Hay should become part of the President’s two-man staff. Nicolay’s daughter later wrote: “The days of the two young men were filled with duties, many of which seemed fruitless and even puerile in view of the national crisis. But the duties had to be performed; people had to be met; questions to be answered; interviews with the President to be arranged or discouraged; letters opened and answered; errands disposed of; and always there was the element of uncertainty—the strain of looking for one expecting important news.”2

Serious and sensitive, Nicolay was more at home in the woods than in the wilds of Washington politics. He served in sensitive presidential diplomatic assignments to Republican politicians despite the precarious state of his health during his White House tenure. His health was delicate in part because Nicolay was studying law in preparation for admission to practice before the Supreme Court. Nicolay took frequent leaves from the White House to take trips to restore his health and visit Illinois, where his fianceé, Therena Bates, lived.

His health was not improved by his relations with Mary Todd Lincoln, who frequently chafed at the way Nicolay handled the official White House social affairs and the White House budget. He recorded one conflict in January 1864 over a cabinet dinner to which she had tried to exclude the family of Secretary of the Treasury Salmon Chase. With Mr. Lincoln’s blessing Nicolay had them included—only to be excluded himself from the dinner. Mrs. Lincoln then decided to run the affair without Nicolay’s help. “Things ran on till the afternoon of the dinner, when Edward came up to tell me that she had backed down, requested my presence and assistance—apologizing and explaining that the affair had worried her so she hadn’t slept for a night or two. I think she has felt happier since she cast out that devil of stubbornness. The dinner was got through creditably. On Wednesday last she sent out cards for the Diplomatic Dinner. While she has not in all matters done so, she has in the main adopted my advice and direction in this.”3

By 1865, both Nicolay and Hay were worn out and ready to leave. Disagreements with Mary Todd Lincoln contributed to an agreement to replace Nicolay with Noah Brooks in President Lincoln’s second term. Mrs. Lincoln conspired with others like Dr. Anson Henry to make the switch, but Nicolay was himself anxious to leave to start a new job.

Nicolay was away from Washington when Lincoln was assasinated. Nicolay wrote his fiancee after he returned to Washington: ‘I cannot describe to you the air of gloom which seems to hang over this city…As I drove up here from the Navy Yard through the city, almost every house was draped and closed, and men stood idle and listless in groups on the street corners.” The White House, wrote Nicolay was ‘dark and still as almost the grave itself.’”4 Two months later, Nicolay was married in Pittsfield, Illinois.

Nicolay subsequently served as a diplomat in Europe and Marshal to the U.S. Supreme Court (1872-87). Nicolay’s presidential assistant, William Stoddard, wrote of him: “People who do not like him—because they cannot use him, perhaps – say he is sour and crusty, and it is good thing that he is….The President showed his good judgment when he put Mr. Nicolay just where he is.”5 But another presidential confident, Alexander McClure was less kind, later arguing that Nicolay “was a good mechanical routine clerk” whose “removal was earnestly pressed upon Lincoln on more than one occasion because of his want of tact and fitness for his trust, and only the proverbial kindness of Lincoln saved him from dismissal.”6 By the time McClure wrote that evaluation, he and Nicolay were engaged in a major dispute over their recollections of President Lincoln’s role in removing Hannibal Hamlin from the 1864 ticket.