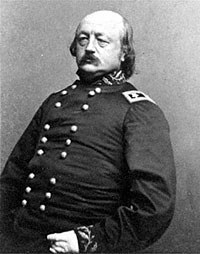 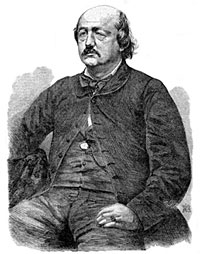 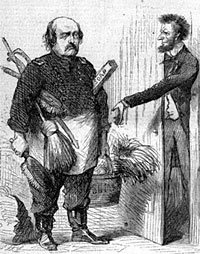 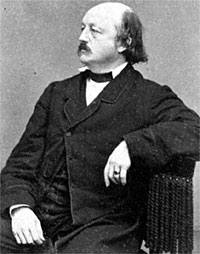 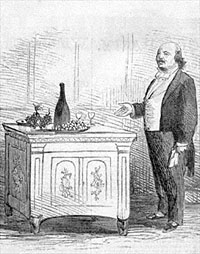 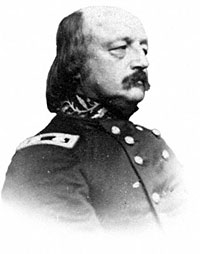 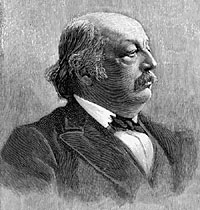 Benjamin Butler AKA “Spoons” and “Beast” was a War Democrat who supported John Breckinridge for President in 1860 after earlier supporting Jefferson Davis for the Democratic nomination. Butler ran unsuccessfully for governor of Massachusetts in 1860 as a Breckinridge Democrat. After the fall of Fort Sumter, he became a Brigadier General of the Massachusetts militia and subsequently took military control of Baltimore in May 1861. His peremptory exercise of authority led to his removal by Gen. Winfield Scott to Fort Monroe. There, his seizure of three runaway slaves as “contraband” led to a crisis about the government’s treatment of escaped slaves and a growing reputation as a radical.

Butler “represented both the positive and negative generalizations of amateur generalship during this era,” wrote historian Thomas J. Goss.1 “He was an early hero of the war and, with the prominent role he played in the war effort, became the symbol of political generals for both policymakers and the public. When Butler arrived in Washington in April 1861, President Lincoln was glad to have the support of such a prominent Democrat, who donated his popularity to the Union cause with every newspaper account containing his name and rank and every speech that proclaimed his political support for the administration’s policies.”2 John G. Nicolay and John Hay wrote that Butler “was a lawyer by profession, but possessed in an eminent degree the peculiar American quality of ability to adapt himself to any circumstances or duty, with a quick perception to discover and a ready courage to seize opportunities.” Goss wrote: “By leading the drive toward emancipation and defending the administration policies, political generals like Butler justified their selection through the repeated use of their oratory and political talents.”3

Butler crossed Union commander Winfield Scott by his unauthorized actions in confronting secessionists in Baltimore and was sent to Fort Monroe in Virgina. Postmaster General Montgomery Blair wrote Butler in late May praising him for declaring escaped slaves to be “contraband of war: “The Secessionists have used them to do all their fortifying, and I suppose nobody can doubt that this sort of work at which the Secessionists have applied themselves with immense energy is the essence of their military operations. The question is to come up in the Cabinet tomorrow, and whilst your brother says that old Scott said he intended ordering you to change your actions, the President told me this morning that he had not seen old Lundy as merry since he had known him, as he was this morning at your decision on the fugitive slave question. He called it Butler’s fugitive slave law. The President seemed to think it a very important subject, however, and one requiring some thought in view of the numbers of negroes we are likely to have on hand in virtue of this new doctrine.”4

Butler later served in Union commands in Louisiana where he took over after the capture of New Orleans in April 1862 and was a tough, effective and controversial military governor who was nicknamed “Beast Butler.” He was frequently surrounded by the aura of corruption although his personal involvement was never proven. Self-absorbed and self-aggrandizing, he was an ambitious bundle of contradictions. Butler went from opposing black soldiers to using them in the army. In 1863, he was named to command the Department of Virginia and North Carolina and in 1864 he was put in charge of Union efforts to control potential Election Day riots in New York City. He was more effective as a military governor than as a general—bungling both the defense of Bermuda Hundred in Virginia and the attack on Fort Fisher in North Carolina in December 1864.

He frequently visited the White House between military appointments. William O. Stoddard recalled the first visit in April 1861: “I never saw him wear quite so much uniform as he did when, in 1861, he came up to pay his respects to the President as a commander of Massachusetts militia. He then wore the full uniform of a Bay State militia major general, and a wonderful disguise it was, with a vast amount of sash, mountainous epaulets and a scythe sword with a railway curse in it. The cocked hat was also a curiosity of war – or peace.”5 Regardless of his uniform, Butler was always aware of his own self-importance “Nobody ever doubted his energy; nearly everybody doubted his character. He was endlessly useful and endlessly troublesome. Only a Dickens could do justice to his remarkable combination of gifts, faults, and picturesque anfractuosities,” wrote historian Allan Nevins.6

On one occasion, General Butler complained to Mr. Lincoln about desertions. “‘Mr. President,’ said Butler, “the bounties which are now being paid to new recruits cause very large desertions. Men desert and go home, and get the bounties and enlist in other regiments.’ ‘That is too true,’ he replied, ‘but how can we prevent it?’ ‘By vigorously shooting every man who is caught as a deserter until it is found to be a dangerous business.’ A saddened, weary look came over his face which I had never seen before, and he slowly replied, ‘You may be right – probably are so; but God help me, how can I have a butcher’s day every Friday in the Army of the Potomac?'”7

Biographer Richard S. West, Jr. wrote of one Lincoln summons to the White House: “A telegram informing him that he was being considered for ‘a peculiar and important service’ urged him to come to the White House immediately upon debarking in New York. In Washington after Lincoln had greeted him, Butler asked why he had been recalled from New Orleans. Lincoln replied that he was not at liberty to tell him, but that he might ask Stanton.” What followed resembled a charade. Stanton told Butler: “The reason was one which does not imply, on the part of the Government, any want of confidence in your honor as a man or in your ability as a commander.” Butler replied that “yyou have told me what I was not recalled for. I now ask you to tell me what I was recalled for.” Stanton replied that a fellow lawyer, it was of no use your filing a bill of discovery upon me, for I shan’t tell you.’” Butler refused to play this game and held out for a return to his former command in New Orlaans, but President Lincoln was not ready again to replace one Massachusetts political general with another in Louisiana. Instead, Butler got a furlough home.8

As one of the army’s most prominent political generals, Butler had the potential to cause political trouble for President Lincoln, especially given his strong relations with Radical Republicans in Congress. Mr. Lincoln used former War Secretary Simon Cameron to sound out Butler’s political intentions in 1864. Butler denied presidential ambitions and the President tried to keep him happy with other military employment until General Grant removed him from command in Virginia in early 1865. The President himself considered Butler “as full of poison gas as a dead dog.”

On January 7, 1865 Secretary of War Stanton responded to a request from General Grant to President Lincoln. Stanton ordered: “I. By direction of the President of the United States, Major General Benjamin F. Butler is relieved from the command of the Department of North Carlina and Virginia. Lieut. Gen. Grant will designate an officer to take this command temporarily. I. Maj. Gen. Butler on being relieved, will repair to Lowell, Mass., and report by letter to the Adjutant General of the Army.”9 Historian William C. Harris wrote: “On the day after Appomattox, Ben Butler…made an impromptu speech from the balcony of Willard’s Hotel in Washington in which he urged the disfranchisement of rebel leaders and ‘equal rights for the black man under the law.’”10

After the Civil War, Butler served as a Radical Republican (1867-75) and a Greenback (1882-83) in Congress, Democratic Governor of Massachusetts (1883-84) and Greenback Party candidate for President in 1884. During the impeachment trial of Andrew Johnson, he served as one of seven House impeachment managers.