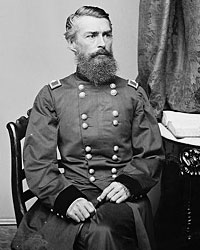 Union official in charge of railroad construction, Herman Haupt served as the U.S. Railroad Superintendent from 1862 to 1863. His whole background was in railroading after his graduation from West Point—mostly in Pennsylvania and Massachusetts. He was chosen for the railroad position by Secretary of War Edwin Stanton. Haupt, according to Stanton’s biographer Fletcher Pratt, “began by demanding that he should have no rank, title, or uniform, no compensation beyond his expenses, and that he could go back to his Western Massachusetts railroad tunnel after the campaign was over. The conditions he set wore away under the tooth of time; Haupt did not see his tunnel again until nearly the close of the war, when he retired as a general. In the meanwhile, he recruited his own labor force, built railroads and bridges furiously, and told military officers to go to hell.”1

John Hay wrote that Mr. Lincoln was “particularly struck with the businesslike character of his character of his despatch, telling in the fewest words the information most sought for, which contrasted so strongly with the weak, whiney, vague, and incorrect despatches of the wholim General-in-Chief. If heads or shoulder-straps could be exchanged, it would be a good thing.”2 On May 28, 1862, President Lincoln visited one of Haupt’s creations—a bridge across Potomac Creek. He observed: “That man Haupt has built a bridge four hundred feet long and one hundred feet high, across Potomac Creek, on which loaded trains are passing every hour, and upon my word, gentlemen, there is nothing in it but cornstalks and beanpoles.”3

Haupt had a habit of showing up at the war front or the White House at key points in the war—like at George McClellan’s headquarters just after the Second Battle of Bull Run and at Joseph Hooker’s headquarters before Lee’s invasion of Maryland. Haupt also visited Fredericksburg shortly after the battle there in December 1862. According to Haupt biographer James A. Ward, “That evening Haupt and [Congressman John Covode] called on Lincoln in Washington to present firsthand reports of the battle. Haupt’s account so upset the president that the three men walked at once to Halleck’s house to confer on future action. Haupt repeated his testimony; Lincoln asked Halleck to order Burnside to recross the river immediately; which Halleck refused to do. Haupt then stressed to the president that Burnside occupied a tenable position on the south side of the river and was in no immediate danger.”4

Haupt also showed up at Mr. Lincoln’s office shortly after the Battle of Gettysburg in 1863. “On July 6 came Haupt in person [to the White House], direct from the front, and officers with eyewitness accounts of the battle, including General [Daniel Sickles], who had had a leg shot off on the second day. Haupt was no more comforting than Meade’s order; he had seen the General the day before to tell him that the new railhead and telegraph had been carried through Hanover Junction to Gettysburg (which surprised Meade very much), and to plead with him to follow the enemy hard,” wrote historian Fletcher Pratt. “Meade replied that his men needed rest; Haupt told him they could not be as tired as the Confederates. ‘You must pursue [Confederate General Robert E.] Lee and crush him. His ammunition and stores must be exhausted, and his supply trains can be easily cut off. He is in desperate straits, like a rat in a trap, and you can whip and capture him.'”5

According to Stanton biographer Frank A. Flower, “Haupt mounted an engine and rushed to Washington as fast as steam could carry him to confer with Secretary [Edwin M. Stanton] and General-in-Chief [Henry W. Halleck]. The former was dumbfounded by the information brought to him and requested Haupt to go with Halleck to Lincoln while he himself ‘talked’ with Meade by telegraph. What he said to Meade was purposely left unrecorded, but an hour later he walked rapidly to the White House, where he found the conference between Lincoln, Halleck, and Haupt about concluded.” Lincoln inquired:

‘What shall we do with your man Meade, Mr. Secretary?’

‘Tell him, said Stanton to Haupt, that Lee is trapped and must be taken,’ and then, turning to Lincoln, added: ‘He can be removed as easily as he was appointed, if he makes no proper effort to end this war now, while he has Lee in a trap.’6

Robert Lincoln made one of his infrequent visits to the White House in mid-July, 1863: “Entering my father’s room right after the battle of Gettysburg, I found him in tears with his heard bowed upon his arms resting on the table at which he sat. “Why, what is the matter, father?” I asked. For a brief interval he remained silent, then raised his head, and the explanation of his grief was forthcoming. ‘My boy,’ he said, ‘when I heard that the bridge at Williamsport had been swept away, I sent for General Haupt and asked him how soon he could replace the same. He replied, “If I were uninterrupted I could build a bridge with the material there within twenty-four hours, and Mr. President, General Lee has engineers as skillful as I am.” Upon hearing this I at once wrote Meade to attack without delay, and if successful to destroy my letter, but in case of failure to preserve it for his vindication. I have just learned that at a council of war of Meade and his generals, it has been determined not to pursue Lee, and now the opportune chance of ending this bitter struggle is lost.”7

A few months later, Haupt left government service after he refused to sign his army commission and submit himself to army discipline. He was smart, honest, ambitious and strong-willed, but he had a tendency to give his opinion on a wide range of technical problems in the war beyond railroads. He had a talent for both engineering and administration. Previous to his army service, Haupt had been overseeing construction of the Hoosac Tunnel in Massachusetts. He had become wealthy in railroad, mining and real estate ventures in Pennsylvania, but lost most of his fortune in bad business decisions and complicated politics surrounding the tunnel. The tunnel continued to be his fiscal albatross after the war but he had successful ventures in railroading in Pennsylvania and the West. He also built the nation’s first extensive oil pipeline.