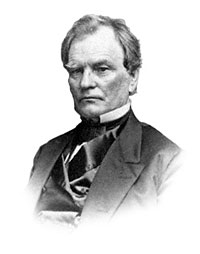 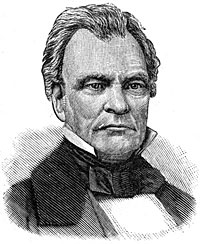 Nicknamed “Bluff Ben,” Benjamin F. Wade was a Senator from Ohio (Whig, Republican, 1851-69). Support for him within the Ohio delegation at 1860 Republican Convention split the state’s vote and furthered animosity between himself and Governor Salmon Chase, which originally had developed when Chase opposed his Senate election in 1851. Wade served as chairman of the Joint Committee on the Conduct of the War and the Senate Committee on Territories. Coarse, obstreperous, determined and often at odds with President Lincoln, Wade was co-author of Wade-Davis bill on reconstruction which was pocket vetoed by President Lincoln in July 1864 and the subsequent Wade-Davis Manifesto issued in August 1864.

Maine Congressman James G. Blaine put the best face on Wade when he wrote: “The fidelity, the courage, the ability of Mr. Wade gave him prominence in the North, and were a constant surprise to the South. He brought to the Senate the radicalism which Mr. [Joshua] Giddings had so long upheld in the House, and was protected in his audacious freedom of speech by his steadiness of nerve and his known readiness to fight.”1 Historian Allan G. Bogue reflected Wade’s less attractive side: “Wade was no orator, and his contributions to debate were usually short and, on occasion, intemperate: he once called [Edgar] Cowan a dog and attacked the President in open debate on more than one occasion. A correspondent once described him as stumping into the chamber ‘grim as a bear in ill health’….”2 In the spring of 1861, Wade told the President: “Go on as you seem to be going. Give up fortress after fortress, and Jeff Davis will have you as prisoner of war in less than thirty days!’” Lincoln laughed off the attack.3

Wade thought the President a fool, but the President often got the best of repartee with the sarcastic Wade. Once, Wade told Lincoln that he could put “anybody” in charge of Union troops. “Wade, anybody will do for you, but not for me. I must have somebody—I must use the tools I have.”4 On another occasion in June 1863, Wade was the head of a congressional delegation seeking another removal of Ulysses S. Grant as head of the Union army stalled in front of Vicksburg. The President responded to their complaints with the beginning of a story. “Bother your stories, Mr. President. That is the way it is with you, sir,. It is all story—story. You are the father of every military blunder that has been made during the war. You are on the road to hell, sir, with this Government, and you are not a mile off this minute.” The President responded, “Wade, that is about the distance from here to the Capitol.”5 Journalist Noah Brooks described Wade as alert and combative, but also “tender-hearted, gracious, and lovable man. His impatience with the apparent sluggishness of Lincoln’s administration betrayed him into frequent exhibitions of bad temper, and his intense radicalism too often hurried him into complications with the more conservative Union politicians in Washington; and he did not always extricate himself from these entanglements with credit to himself.”6

The business of the Joint Committee on the Conduct of the War frequently brought Wade tot he White House. Historian William C. Davis related how one interview concluded between Mr. Lincoln and Senator Wade: “On March 6, 1863, several weeks after replacing Burnside with Hooker, Lincoln met with his new commander of the Army of the Potomac and with influential Republican Senator Benjamin Wade, chairman of the powerful Joint Committee on the Conduct of the War. As they concluded their meeting and Hooker left, the president saw Wade to the door and noticed Sergeant James Stradling waiting next in line. He came seeking help getting transportation back to his regiment, but, seeing him now, Lincoln said, ‘Senator, we have had the head of the army here a few minutes ago, and learned from him all he cared to tell. Now we have here the tail of the army, so let us get from him how the rank and file feel about matters.'”7

Wade’s colleague Zachariah Chandler took the lead in uniting the Republican Party behind Abraham Lincoln in September 1864. Wade reluctantly acquiesced in the effort, writing Chandler about Mr. Lincoln: “I never had a doubt of our ability to elect him by an overwhelming majority. I only wish we could do as well for a better man. But to save the nation I am doing all for him that I possibly could do for a better man, were it not for the country there would be a poetical justice in his being beaten by that stupid ass McClellan, who, he persisted in keeping in the service against all that you and I, and Andy Johnson could do to have removed and a live man [put] in his place. That stupid wilfulness cost this nation more than a hundred thousand men, as you well know and when I think of those things, I wish the d___l had Old Abe. But the issue is now made up and we have either got to take him, or Jeff Davis, for McClellan and all those who support him are meaner traitors than are to be found in the Confederacy.”8

Biographer Trefousse concluded: “Lincoln’s death removed from the scene a man whom Wade had never understood. Had he reflected calmly upon the President’s actions during the past years, he would have seen that, despite his great caution, the Executive had always shown a tendency to come around gradually to an endorsement of radical policies. It should therefore also have been clear to Wade that the call to the Virginia legislature would never stand. But it was impossible for him to see these things in their true light. Not only was he much too prejudiced against Lincoln, but the differences between the two men were too great. Unlike in temperament, outlook, and character, they probably could not have avoided a clash.”9

Wade was a onetime law partner of fellow abolitionist Joshua Giddings. He served as a state senator and judge with a rough frankness and stubborn belief in his own principles. His uncompromising devotion to radical principles often alienated natural allies, including Giddings. He opposed President Andrew Johnson on Reconstruction before leaving Senate to return to law practice. As president pro tempore of the Senate, he would have succeeded Johnson had he been convicted in his impeachment trial. Wade’s abrasive personality and position on issues such as inflation may have caused some senators to doubt the wisdom of impeachment. After he lost a bid for reelection in 1868, he returned to the law and became the attorney for the Northern Pacific Railroad.