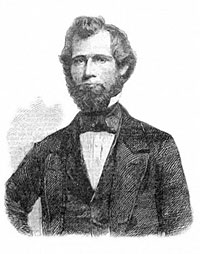 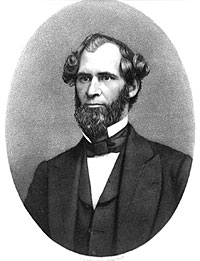 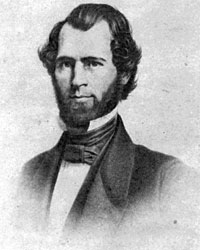 Galusha A. Grow was a Congressman from Pennsylvania (Democrat, Republican, 1851-63, 1894-1903). Grow succeeded his legal mentor, David Wilmot, in Congress at age 27. He had a strong will and weak health; he was an indefatigable and fearless campaigner. He favored easy land and hard money. A bachelor attorney who preferred policy to politics, politics to the law, and workers to capitalists, Grow later found a career in business. He sometimes took positions out of sync with Pennsylvania’s pro-tariff, anti-immigrant electorate. Grow was an ally of Thaddeus Stevens in the House and an opponent of Simon Cameron in Pennsylvania politics. As a result, his relations with President Lincoln were courteous but not particularly close.

Grow was fervently anti-secessionist. Grow biographer Robert D. Ilisevich wrote: “His scorn for the Confederacy and the fiery patriotism that laced his inaugural remarks [as speaker] surprised no one who knew him. His friends supported him for his strong antislavery convictions, his leadership on the floor, and the recognized skills demanded by the office he now held. His opponents, however, interpreted his attitude of righteous indignation toward the South as a battle cry.”1 One evening, President Lincoln told Grow, “My boys are green at the fighting business, but wait till they get licked enough to raise their dander! then the cry will be, ‘On to Richmond,’ and no ‘Stonewall’ will stop them!”2

Journalist Noah Brooks described Galusha Grow as “a tall, slightly built man with a bilious temperament and a somewhat querulous voice and manner. His health is imperfect, and he has not always had that command of temper which was the great charm of the matchless [Nathaniel P.] Banks when in the chair, but sings out for order with more petulance than dignity. Grow is not a favorite with the members, but he is a good parliamentarian and useful in his place. He is dressed with scrupulous neatness, and his gray and black locks are always arranged with a tonsorial skill suggestive of the barber’s shop.”3

Robert L. Wilson, a longtime Illinois acquaintance of Mr. Lincoln, later wrote William Herndon about his experiences with Mr. Lincoln and recalled: “I was with the President one day, when Mr Grow…came in, and in an excited manner” demanded that his brother-in-law be appointed as a territorial judge. President Lincoln apologized for the oversight and said an appointment would be made soon. “Mr. Grow was very angry, and talked, as it looked to me, impertinently, Mr Seward came in, and took part defending Mr Lincoln. Mr Grow used threats that surprised me. After Mr Grow and Mr Seward had retired, and we were alone, he was troubled. Said he had then been President five months, and was Surprised any body would want the office.” In President Lincoln’s subsequent complaints about patronage, he told Wilson that the “importunities were urgent in proportion to the unfitness for the appointee; he said he was so badgered with applications for appointments that he thought sometimes that the only way that he could escape from them would be to take a rope and hang himself, on one of the trees in the lawn south of the Presidents House, looking out at the trees through the window at the same time.”4

Grow served as Speaker of the House (1861-63) after defeating Frank Blair for the post Grow was particularly relentless in his support of Homestead legislation which would provide free land for Western migrants. He helped guide the Homestead Act to enactment in 1862 after nearly a decade of uninterrupted lobbying for the measure and support for immigrant access to land. His support for the Homestead bill led him into conflict with the South and cost him early races for House Speaker—especially after he was involved in a melee on the House floor in 1858.

“He was a thorough politician and a good presiding officer, possessing the tact, the quickness of perception, and the decision acquired by editorial perception,” noted journalist Ben Perley Poore.5 Grow’s relationship with the White House was eased by the work and friendship of presidential secretary John Hay, of whom Grow said there was “no person in whom the great President reposed more confidence and to whom he confided secrets of State as well as his own personal affairs with such great freedom.”6

Biographer Ilisevich wrote that the President and the Speaker “seemed to get along admirably, at least during Grow’s speakership. If Grow harbored any bad feelings toward the president, he forgot them later in life. He then spoke warmly of Lincoln and considered him the nation’s greatest president. ‘Every time I met him (and for two years I was with him several times each week) I was deeply impressed by the grandeur of his character, brought into strong relief by the lights and shadows of the war.’ As a judge of men and public opinion, Grow believed Lincoln to be almost infallible, a leader who never rubbed Congress the wrong way and who handled men masterfully.”7

Grow did not send many letter to President Lincoln, but in January 1861, he wrote President-elect Lincoln: “My colleagues having signed and sent to you a recommendation for Hon. T[haddeus]. Stevens of Pa for a place in your cabinet and not having an opportunity at the time of signing I take this occasion to assure you that I fully concur in their endorsement.” Grow added: “In closing permit me to express the earnest hope, as well as the desire of a majority of republican members of Congress, that you may find it compatable with your sense of duty to secure the services of Mr [Schuyler] Colfax as P. M.” Genl.”8 Neither man received the requested appointment.

Grow lost a reelection bid to the House in 1862 because of his commitment to Radical Republicans. In subsequent years, he found his political ambitions stifled by both the Curtin and Cameron wings of the Pennsylvania party. He returned to the House of Representatives three decades later in 1894 after many unsuccessful quests for Congress, the Senate, the governorship and the vice presidency.