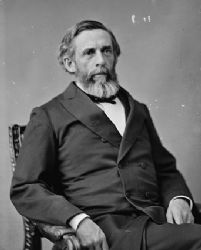 Massachusetts politician who was a Free-Soil Democrat before becoming a Republican. He was an emancipation-supporting lawyer who was named as Governor John Andrew’s military representative to the federal government at the outset of the Civil War. He served as commissioner of Internal Revenue (1862-1863) until elected to Congress (Republican, 1863-1870) and to the Senate (Republican, 1873-1876).

Boutwell was named commissioner of internal revenue by Secretary of the Treasury Salmon P. Chase in July 1862 before winning election to Congress that November over a more conservative Republican who had Democratic support. Boutwell recalled that he was given free rein by Chase in setting up the new Treasury bureau. “The organization of the office was effected by systematic process,” wrote Boutwell in his memoirs. “From manufacturers, from assessors and collectors, and from other interested parties numerous inquiries were thrown into a basket, and reserved for the evening sessions, at which the heads of divisions..were required to attend. These letters were read at the conferences, and when a conclusion was reached, the letter containing the inquiry was put aside for answer.”1 Boutwell then answered the letter and thereby set policy for the Treasury Department which his employees followed.

Boutwell was also given almost free rein in appointing the bureau’s agents around the country. He made these appointments “in August and September” 1862 “when visits to Washington were not agreeable.”2 He had to push President Lincoln to make the appointments by September 1, however, because the President was preoccupied with Union army reverses in Virginia. In the middle of confusion after the Union defeat at the Second Battle of Bull Run, Boutwell sought an appointment to appoint collectors and assessors under the new law. “Finally he gave me Sunday at 11 o’clock. He canvassed the papers and considered the merits of the candidates with as much coolness and care apparently, as he would have exhibited in a condition of profound peace. When the business was ended, he asked me what I thought about the command of the army. I said unhesitatingly that the restoration of [George B.] McClellan seemed the only safe policy. I had seen and heard so much, that I was apprehensive of serious trouble in the army if he should again be superseded. I then said that emancipation seemed the only way out of our troubles. He said in reply:

“Must we not wait for something that looks like a victory? Would not a proclamation now appear as brutum fulmen?” – the only Latin I ever heard from the President.”3

Boutwell continued serving at the Treasury Department until March 1863. He had frequent contact with President Lincoln, who had initially preferred another candidate for the finance post to which Boutwell had been appointed. Boutwell recalled in his memoirs:

During the autumn and winter of 1862-3, I was in the habit of calling at the War Office for news, when I left the Treasury – usually between nine and eleven o’clock. Not infrequently I met Mr. Lincoln on the way or at the department. When the weather was cold he wore a gray shawl, muffled closely around his neck and shoulders. There was a great anxiety for General Grant in 1863, when he was engaged in the movement across the Mississippi. At that time I went to the War Office daily. One evening I met the President in front of the Executive Mansion, on his way back from the War Department. I said:
“Any news, Mr. President?”
“Come in and I will tell you!”
I knew from the tones of his voice that he had good news. He read the dispatch, and then by the maps he followed the course that Grant had taken. The news he had received was from Grant himself. From the 4th of March, 1861, I had not seen Mr. Lincoln as cheerful as he was when he read the dispatch, and traced the campaign on the map. He felt, evidently that the end was approaching – although it was nearly two years away.”4

In October 1862 as Boutwell was leaving Washington to campaign for Congress, he mentioned to President Lincoln that a Massachusetts politician said that Mr. Lincoln had issued the Emancipation Proclamation as a result of the governors meeting at Alltoona, Pennsylvania in September. President Lincoln told him: “I never thought of the meeting of the governors. The truth is just this: ‘When Lee came over the river, I made a resolution that if McClellan drove him back I would send the proclamation after him. The battle of Antietam was fought Wednesday, and until Saturday I could not find out whether we had gained a victory or lost a battle. It was then too late to issue the proclamation that day, and the fact is I fixed it up a little Sunday, and Monday I let them have it.”5

Boutwell became a strong admirer of President Lincoln. He wrote that “Mr. Lincoln possessed a quality called sagacity, but which in him was wisdom, or a near approach to what passes for wisdom in man.”6 Boutwell wrote: “It cannot be claimed for Mr. Lincoln that he had any instructive military experience, or that he had any technical knowledge of the military art; but it may be said with truth that his correspondence with the generals of the army and his memoranda touching military operations indicate the presence of a military quality or faculty which in actual service might have been developed into talent or even genius.”7

Boutwell wrote that General Joseph “Hooker was in Washington on the Thursday of the week before the battle of Gettysburg, and at a conference with the President and the Secretary of War, it was agreed to hold Harper’s Ferry, which, the year before, had been surrendered with great loss of men and materials of war. Upon his return to headquarters General Hooker changed his opinion, and, without reporting to the Secretary of War, he ordered General Wilson to evacuate the post and join the main army. The order Wilson transmitted to the Secretary of War. Mr. Stanton, assuming that there had been in error in the dispatches, or a misunderstanding, counter-manded Hooker’s order. Thereupon Hooker, without seeking for an explanation, resigning his command.8

Boutwell wrote that “in the early part of May, 1864, I had occasion to observe the evidence of the fact that he was not indifferent to the criticisms that had been made upon him, and especially was he not indifferent to the criticisms touching his treatment of McClellan, who, at a time, covering the year 1861 and the largest part of the year 1862, was the idol of the army and the hope of the country.

When General Grant was about to move against Lee, the President wrote a letter to Grant, in which he said, among other things, that he neither knew nor wished to know his plan of operations; but he tendered his good wishes and promised every aid which the Government could furnish.
In reply, General Grant did not unfold his plan, but in the fullest manner he expressed his satisfaction with the support that he had received , and he then said in substance, ‘If the results shall be less favorable than I hope and the Government expects, the fault will not be the fault of the administration.”
Soon after the receipt of General Grant”s letter, at an interview with Mr. Lincoln, he took the two letters from a pigeonhole over his table and read them to me, and with special interest, as I thought, from the fact that General Grant’s conduct was in contrast with the conduct of General McClellan in similar circumstances.”9

Indiana Congressman George W. Julian wrote in his memoirs that “Boutwell impressed the House as a man of solid qualities, and a formidable debater.”10

Boutwell biographer Thomas H. Brown wrote that as “a freshman legislator, his views [preceded] him. He was already a well known advocate of stringent war measures, emancipation, use of black troops, black suffrage, and the punishment of Southern states.”11

Boutwell was close to Secretary Chase and recalled that President Lincoln told him before he took office in March 1861: “From what I hear, I think Mr. Chase is about one hundred and fifty to an other man’s hundred.”12 After President Lincoln accepted Chase’s resignation at the end of June 1864, Boutwell seen as a possible successor if Maine Senator William P. Fessenden declined the position. Lincoln aide John Hay wrote in his diary: “Going to the Senate as usual early this afternoon I saw several who seemed very well pleased. At the House it was still better. [Elihu B.] Washburne said, ‘This appointment of Fessenden is received with great eclat. The only fear is that he will not accept. The general feeling in Congress is in favor of Boutwell in case Fessenden declines. If the President cares for any expression from Congress a very strong one could be sent up for Boutwell. Coe of New York was here about the Gold Bill which was repealed today He visited the President & was by him set upon Fessenden to aid in insisting on his accepting the place. The President said so to Howe also & to Diven & to Ashmun and others. A strong delegation of Congress waited upon Fessenden today to add their request that he would accept.”13

The Massachusetts congressman lobbied for Chase’s appointment as chief justice of the Supreme Court after Chief Justice Roger B. Taney died in October 1864. President Lincoln told him: “There are three reasons why he should be appointed and one reason why he should not be. In the first place, he occupies a larger space in the public mind, with reference to the office, than any other person. Then we want a man who will sustain the Legal Tender Act and the Proclamation of Emancipation. We cannot ask a candidate what he would do; and if we did and he should answer, we should only despise him for it. But he wants to be president, and if he doesn’t give that up it will be a great injury to him and a great injury to me. He can never be president.”14 President Lincoln was wrong about the Legal Tender act, which Chase ruled unconstitutional as chief justice. “That measure was the key to his financial system, and a measure indispensable to the prosecution of the war,” noted Boutwell.”15

Prior to the Civil War, Boutwell served in the Massachusetts legislature and as Governor of the state (Democrat, 1851-1853). Boutwell himself as served as a Democratic governor of Massachusetts in the early 1850s. He was a strong political supporter of another former Massachusetts governor, Nathaniel P. Banks – and had advocated Bank’s elevation to the Cabinet in December 1860. After the Civil War, Boutwell was one of the House managers of President Andrew Johnson’s impeachment and secretary of the Treasury (1869-1873) under President Ulysses S. Grant. He briefly represented Massachusetts in the Senate (1873-1876).