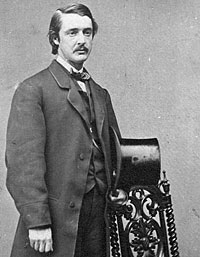 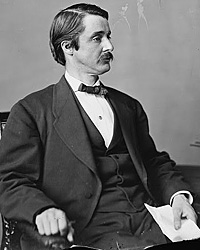 Senator from Rhode Island (Democrat, 1863-75), William A. Sprague had more money than sense. As heir to a cotton mill fortune, he organized the Providence Marine Artillery Company in the 1850s. As Governor of Rhode Island (1861-63), he put himself in charge of state militia but refused a regular army commission unless he could be a major general. He arrived in Washington soon after the fall of Fort Sumter. His good looks thinly masked a lack of real leadership skills. However, noted historian William B. Hesseltine, “many [in Washington] thought that Sprague cut a dashing figure. Lincoln liked him, and the governor was a frequent White House visitor. He fought in the battle of Bull Run, and returned to Washington an even greater hero.”1

Sprague’s political and personal life were marred by weaknesses for alcohol, women and depression. The impetuous and self-indulgent Sprague wed Kate Chase, the spoiled and politically precocious daughter of Salmon P. Chase, in a marriage based more on political ambition than bliss. She needed the wealth and prestige of a marriage to one of America’s wealthiest men; he needed contacts that could help keep his nine mills supplied with cotton and supply his need to feel important—he was widely considered “insignificant” by Washingtonians like John Hay. But Hay’s associate, John Nicolay, realized that he and his father-in-law were politically significant and insisted on inviting them to a Cabinet dinner in January 1864. Mrs. Lincoln objected but she was overruled by her husband. Nicolay late wrote in a letter to Hay: ” As I wrote before, after having compelled Her S[atanic] Majesty to invite the Spragues I was taboo, and she made up her mind resolutely not to have me at the dinner.”2

Sprague’s “Texas Adventure” involved a treasonous scheme to sell arms to Confederates in order to buy cotton; publicity about it was suppressed by Secretary of War Edwin Stanton. Sprague defied his father-in-law when he voted for Andrew Johnson’s impeachment—a vote which was probably dictated by his vulnerability to legal reprisals from Stanton.

Sprague financially supported his father-in-law’s abortive search for the 1864 presidential nomination but chafed at any additional personal and political financing. His marriage with Kate ultimately floundered and broke up on the rocks of jealousy, infidelity, emotional incompatibility and bankruptcy. By the late 1870s, their lives were a public scandal, punctuated by Sprague’s attack on New York Senator Roscoe Conkling, with whom Kate was romantically involved.

Sprague’s wealth rested on a variety of enterprises, including a steamship company, a railroad company, foundries and mills, and vast land holdings.