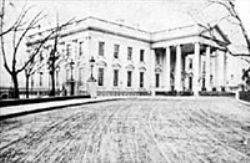 The new elegance of the White House was undermined by heavy traffic from citizens interested in visiting the Lincolns or just taking home a piece of their house. The Civil War brought thousands of Americans to Washington on military other official business. French reporter Ernest Duvergier de Hauranne wrote that “At all hours of the day, you will find curious or idle people milling about in the great reception room where the President holds his popular audiences. It is said that some visitors – country bumpkins, no doubt – cut pieces from the silk curtains to take home as souvenirs of their pilgrimage. You may think that a policeman or at least a guard has been posted. Not at all! There is only a notice asking visitors to respect the furnishings, which belong to the government.”1 Wear and tear was clearly exacerbated by this lack of security at the White House.

Journalist Noah Brooks wrote in early 1864, “People who visit the White House usually have a free range over the East Room and one or two of the adjoining parlors; accordingly relic-hunters (let us hope they are no worse), have acquired the practice of cutting out and carrying off bits of rich carpet, damask hangings, and even large pieces of fringe, cords, tassels, gilt scroll-work and the covering of damask sofas. A few weeks ago an officer was caught, in company with two ladies, who had his penknife and were cutting out a square of red brocade from one of the East Room chairs, while he stood guard. The ladies were let off and the officer was sent to the Old Capitol [Prison]. Yesterday, a man in the garb of a private soldier was caught while skinning off the damask cover of a sofa. He was sent to the guardhouse. Well might an astonished Dutchman say, ‘Mine Gott, vat a peoples!'”2

Historian Margaret Leech noted that the situation worsened by the fall of 1864: “In the absence of ushers to protect the costly public property, the craze for mementoes had led to wanton vandalism, and it seemed natural and desirable that special officers should be assigned to the Executive Mansion. Late in November, the press began to report arrests. The National Republican stated that it had been requested to give notice that Marshal Lamon had detailed officers to the White House under orders to apprehend all persons detected in larcenies. Four members of the Metropolitan Police had, in fact, been assigned to duty there. However, their primary function was not to arrest memento seekers, but to protect the person of the President.”3 The President himself was perplexed by the destruction. “Why should they do it?” he once asked.4

“All was fish which came to their net, from buttons deftly cloven off from Mrs. Lincoln’s dress or flowers from the vases, to strips rudely severed from the curtains or the carpet. Tassels, fringes and minor ornaments were perpetually disappearing. One relic-worshipping vandal, male or female, cut nearly two feet in length out of a nearly new silk window curtain. All the furniture, vases, &c., were of the heaviest description, or they would have doubtless been carried off piecemeal. It is no matter of wonder that, during the confusion which followed the murder of Mr. Lincoln, this sort of plunder was carried on by wholesale. The wonder, if any, is that the house itself was not split up and carried off for distribution among curious collections of similarly stolen property. The stealing was all done well and successfully,” wrote aide William O. Stoddard.5

Indeed, the depredations to the Executive Mansion worsened after the President’s death in April 1865 when servants and visitors both took advantage of lax security to remove everything from crystal to furnishings. According to White House historian William Seale, “With no supervision, tourists who were so inclined looted the state rooms for souvenirs. Stackpole the steward either could not keep order, or did not have the good judgment to do so. The public pressed in when the doors opened in the morning and left only when forced out by the afternoon closing.” Later, a grieving Mary Todd Lincoln was blamed for the disappearance of government property and committing the depredations of many souvenir-seekers.