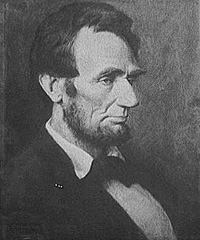 There are two versions of what President Lincoln said in response to the delegation from the Union National Convention when they came to the White House on June 9, 1864. One was published in the New York Tribune:

[Mr. Chairman and] Gentlemen of the Committee: I will neither conceal my gratification, nor restrain the expression of my gratitude, that the Union people, through their convention, in their continued effort to save, and advance the nation, have deemed me not unworthy to remain in my present position.
I know no reason to doubt that I shall accept the nomination tendered; and yet perhaps I should not declare definitely before reading and considering what is called the Platform.
I will say now, however, [that] I approve the declaration in favor of so amending the Constitution as to prohibit slavery throughout the nation. When the people in revolt, with a hundred days of explicit notice, that they could, within those days, resume their allegiance, without the overthrow of their institution, and that they could not so resume it afterwards, elected to stand out, such [an] amendment of the Constitution as [is] now proposed, became a fitting, and necessary conclusion to the final success of the Union cause. Such alone can meet and cover all cavils. Now, the unconditional Union men, North and South, perceive its importance, and embrace it. In the joint names of Liberty and Union, let us labor to give it legal form, and practical effect.1

William Dennison, who was the president of the National Union Convention, made a brief speech:

The National Union Convention, which closed its sittings at Baltimore yesterday, appointed a Committee consisting of one from each State, with myself as Chairman, to inform you of your unanimous nomination by that Convention for election to the office of President of the United States., That Committee, I have the honor of now informing you, is present. On its behalf I have also the honor of presenting you with a copy of the resolutions or platform adopted by that convention, as expressive of its sense , and of the sense of the loyal people of the country, which it represents, of the principles and policy that should characterize the administration of the Government in the present condition of the country. I need not say to you, sir, that Convention, in thus unanimously nominating you for reelection but gave utterance to the almost universal voice of the loyal people of the country. To doubt of your triumphant election, would be little short of abandoning the hope of a final suppression of the Rebellion and the restoration of the Government over the insurgent States. Neither the Convention nor those represented by that body entertained any doubt as to the final result. Under your administration, sustained by that loyal people, and by our noble Army and gallant Navy. Neither did the Convention, nor do this Committee doubt the speedy suppression of this most wicked and unprovoked Rebellion. (A copy of the resolutions was here handed to the President.) I would add, Mr. President, that it would be the pleasure of the Committee to communicate to you, within a few days, through one of its most accomplished members, Mr. [George William] Curtis of New York, by letter, more at length the circumstances under which you have been placed in nomination for the Presidency.2

On the same day, Mr. Lincoln also received a delegation from the National Union League, which had also met in convention in Baltimore, just before the party convention. He replied:

Gentlemen: I can only say, in response to the kind remarks of your chairman, as I suppose, that I am very grateful for the renewed confidence which has been according to me, both by the convention and by the National League. I am not insensible at all to the personal complement there is in this; yet I do not allow myself to believe that any but a small portion of it is to be appropriated as a personal compliment. The convention and the nation, I am assured, are alike animated by a higher view of the interest of the country for the present and the great future, and that part I am entitled to appropriate as a compliment is only that part which I may lay hold of as being the opinion of the convention and of the League, that I am not entirely unworthy to be intrusted with the place I have occupied for the last three years. I have not permitted myself, gentlemen, to conclude that I am the best man in the country; but I am reminded, in this connection, of a story of an old Dutch farmer, who remarked to a companion once that ‘it was not best to swap horses when crossing streams.’ 3

When the National Union-Republican Convention met in Baltimore in early June, it was a natural progression for delegates to visit Washington as well. Historians Harry. J. Carman and Reinhard H. Luthin wrote: “On June 9 returning delegates took virtual possession of Washington, swarming about hotels and forming processions to the White house, where, from eleven in the morning until late at night, Lincoln was busily engaged in receiving their felicitations. Delegation after delegation was presented to him, sometimes singly, sometimes en masse. ‘It seemed that every man who was in the Convention,’ wrote one observer as he watched the continual arrivals and departures from the executive Mansion, ‘was anxious to convey the idea that he was particularly instrumental in procuring the nomination at Baltimore, and especially glad that Lincoln was nominated. This same critical eyewitness continued:

Everybody had something pleasant to say, and Mr. Lincoln endeavored to say something pleasant to everybody, so that everybody should go home entirely satisfied that such an impression had been made on the President-that-is-to-be, that at least a first class mission, if not the vacant seat in the Cabinet, under the sixth resolution of the platform, had been secured.
The next day witnessed a repetition of the scenes of the previous day. Again Lincoln was continuously occupied in giving audiences. ‘Numbers of delegates,’ ran the news from Washington, ‘are still anxiously awaiting their turn to present themselves before the throne and claim a share of the benefits expected to be derived from the work done at Baltimore. Some, of course, had already been rewarded with patronage favors.4