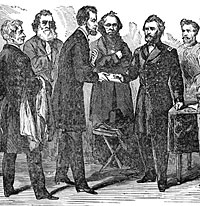 The appearance of General Ulysses S. Grant at a March 8, 1864 White House levee turned the event into near bedlam. Grant had already caused a near-riot at Willard’s Hotel when his presence was revealed about 9:30 P.M.. The crowd at the Tuesday levee in the East Room reacted with hardly less enthusiasm. It was a stormy night but the crowd was prepared for a tempest. Secretary of the Navy Gideon Welles noted in his diary: “Quite a gather; very many that are not usually seen at receptions were attracted thither, I presume from the fact that General Grant was expected to be there. He came about half-past nine. I was near the centre of the reception room, when a stir and buzz attracted attention, and it was whispered that General Grant had arrived. The room was not full, the crowd having passed through to the East Room.”1

The president greeted the western hero outside the Blue Room, saying: “This is General Grant, is it?”2 Another version has the President saying: “Why, here is General Grant! Well, this is a great pleasure, I assure you.” Secretary of the Navy Gideon Welles recalled: “There was hesitation, a degree of awkwardness in the General, and embarrassment in that part of the room, and a check or suspension of the moving column. Soon word was passed around for ‘Mr. Seward.’ ‘General Grant is here,’ and Seward, who was just behind me, hurried and took the General by the hand and led him to Mr. Lincoln, near whom I was standing. The crowd gathered around the circle rapidly, and, it being intimated that it would be necessary the throng should pass on, Seward took the General’s arm and went with him to the East Room. There was clapping of hands in the next room as he passed through and all in the East Room joined in it as he entered. A cheer or two followed. All of which seemed rowdy and unseemly.”3

Everyone wanted to have a look at the famous hero of the Western theater of the war who had hitherto been a stranger to Washington. Their excitement damaged the White House decor and the general’s unflappable demeanor. None of the horrors of the battlefield had prepared him for the rigors of politics.

Artist Francis Carpenter observed how the new military star emerged in Washington: “General Grant reached Washington, after his nomination to the Lieutenant-Generalship, the evening of March 8th, 1864. His reception at Willard’s Hotel, unaccompanied by staff or escort, was an event never to be forgotten by those who witnessed it. Later in the evening he attended the Presidential levee, entering the reception-room unannounced. He was recognized and welcomed by the President with the utmost cordiality, and the distinguished stranger was soon nearly overwhelmed by the pressure of the crowd upon him. Secretary Seward at length mounting a sofa, pulled the modest hero up by his side, where he stood for some time, bowing his acknowledgments to the tumultuous assemblage. He subsequently remarked that this was ‘his warmest campaign during the war.'”4

According to Sergeant Smith Stimmel, a member of the presidential bodyguard, the crowd moved toward the Blue Room when they learned that General Grant was present – creating a bottleneck that prevented General Grant from entering the East Room. “At the suggestion of some one, the men from our troop who were present formed a wedge-shaped angle. With General Grant and Secretary Seward in the angle, we forced a way through the crowd across the East Room to the astride, where there was a sofa. Seward and Grant stepped upon the sofa, and Seward introduced the General to the crowd, and by dint of effort we got the throng started passing in review; and after a general hand-shake by those who were near where the General stood, the President and Mrs. Lincoln, with others who were receiving with them that evening, appeared in the East Room, and with Mrs. Lincoln on General Grant’s arm, while the President and others coupled up, all started off on a grand parade around the room, thus giving everybody present an opportunity to get a good look at the coming hero of the War, while the Marine Band played, with much expression, ‘Hail to the Chief.'”5

According to Secretary John G. Nicolay, “The crowd too partook of the feeling of the occasion. There was no rude jostling, or pushing, or pulling, but unrestrained the circle kept its respectful distance, until after a brief conversation the President gave the General in charge of Seward to present to Mrs. Lincoln, at the same time instructing me to send for the Secretary of War. After paying his respects to Mrs Lincoln the General was taken by Seward to the East Room, where he was greeted with cheer after cheer by the assembled crowd, and where he was forced to mount a sofa from whence he could shake hands with those who pressed from all sides to see him. It was at least an hour before he returned, flushed, heated and perspiring with the unwonted exertion.”6

Journalist Noah Brooks reported the impact that Grant’s arrival had on the deportment of the guests: “The crowd at the levee was immense, and for once the interest was temporarily transferred from the President to the newcomer. The mass of people thronged about him where he moved, everybody being anxious to get at least a glimpse of his face. The women were caught up and whirled into the torrent which swept through the great East room; laces were torn, crinoline mashed, and things were generally much mixed. People mounted sofas and tables to get out of harm’s way or to take observations, and for a time the commotion was almost like a Parisian emeute; but the cause of all this disturbance soon withdrew, and the tumult subsided…”7 Brooks wrote: “For once at least the President of the United States was not the chief figure in the picture. The little, scared-looking man who stood on a crimson-covered sofa was the idol of the hour.”

After the reception, President Lincoln, Seward, Grant and Stanton eventually met together in the Blue Room. Mr. Lincoln outlined the ceremony he had planned for the next day at which Grant would officially become a lieutenant general and general-in-chief of the army.

The Cabinet gathered at 1 P.M. the next afternoon. Grant ignored the advice he had been given by the President the night before composed his own acceptance remarks which he read somewhat awkwardly.