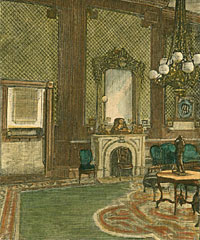 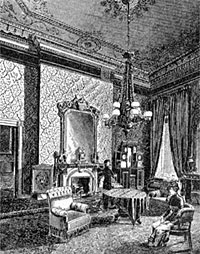 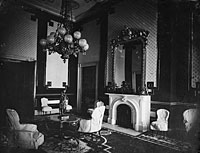 Mrs. Lincoln took pleasure in her redecorating of the White House — especially of the Green Room. It had been one of the centerpieces of Mrs. Lincoln’s work in the summer and fall of 1861. One of its major features was its purple drapes. She took no pleasure in subsequent events there.

Her son, Willie Lincoln, was embalmed in the Green Room in February 1862 before his funeral in the East Room. When seamstress Elizabeth Keckley was preparing his body, President Lincoln came in to look at his lifeless son: “My poor boy, he was too good for this earth. God has called him home. I know that he is much better off in heaven, but then we loved him so. It is hard, hard to have him die.” The President then broke down in tears. His wife, Mary, never again entered the Green Room after placing a laurel sprig on Willie’s body. Shattered, she did not even attend Willie’s funeral.

Nor did Mary come downstairs for President’s Lincoln’s funeral in the East Room in April 1865. The line for the President’s wake wound through the Green Room. Mrs. Lincoln remained distraught in her bedroom.