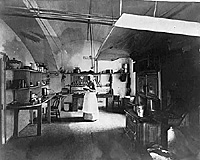 The basement of the White House contained no public areas in the Civil War years. Only the kitchen and servants’ quarters were located in the basement, which William O. Stoddard described as having the air of “an old and unsuccessful hotel.”1 A servants’ staircase connected it to the first and second floors and was frequently used by President Lincoln, who thereby avoided visitors and supplicants. It was described by William Stoddard as “perennially overrun with rats, mildew, and foul smells.”2

According to journalist Noah Brooks, some of the rats had two legs: “We have no ‘kitchen Cabinet’ during this Administration, but the present presiding lady of the White House has caused a terrible scattering of ancient abuses which once accumulated below stairs. The suckers who grew rich on the pickings and stealings from the kitchen, garden and conservatory, and who had spies in every room in the house, have been dispersed, and when they went they circulated innumerable revengeful yarns concerning domestic weaknesses at the White House, and there were some credulous people who believed them.”3

Lincoln aide Stoddard noted that he accompanied Mrs. Lincoln to the basement on one occasion to witness “a fine assortment of wines and liquors” which some New York supporters had sent him: “We went down to look at it in the basement where the expressmen had left it. I discovered that the assortment was miscellaneous, and I remember remarking that the generous donors did not leave out anything.” Mrs. Lincoln was bewildered what to do with the shipment since the Lincolns did not drink. “I had to laugh at her discomfort and advised that she send the gift to her favorite hospital and let the doctors take the responsibility for its disposition,” wrote Stoddard later.4

Washington chronicler John Washington gathered stories of black Americans who knew Abraham Lincoln. He collected a story from the grandson of abolitionist Frederick Douglass about Mr. Lincoln and his black steward, William Slade:

In Lincoln’s day, colored people were not allowed to come into the White House and even Frederick Douglass who had been invited to come to a reception was refused admission until Lincoln saw him in the crowd, sent for him and welcomed him into the room.
It was the custom of Lincoln to sit at the window while reading a book or paper and occasionally gaze out of it. One evening, Lincoln called his messenger and said, “William, who is that old colored man outside with an empty basket on his arm? I have noticed him for some days, as he comes regularly, and leaves with the empty basket. Go downstairs, get him and bring him up here to see me.”
Realizing the nervousness of the poor old man, as he was trying to get himself together, Lincoln said,
“Well, Uncle, I’ve seen you coming here for several days with your empty basket and then in a few minutes you go away. I’ve waited to see if you would come again and if you did I intended to send for you to learn your story. What can I do for you?”
“Thank you, sir,” he said. “You know Mr. Lincoln, I heard you had the Constitution here and how it has provisions in it. Well, as we are hungry and have nothing to eat in my house, I just thought I’d come around and get mine.”
After a hearty laugh Lincoln told Slade to carry him downstairs to the kitchen and fill his basket. The grateful old fellow departed bowing low with gratitude and thanking God, and Lincoln too.5