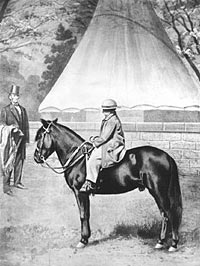 Mr. Lincoln “was fond of dumb animals, especially cats. I have seen him fondle one for an hour,” wrote Treasury official Maunsell B. Field.1 The Lincolns’ dog, Fido, had been left in Springfield, much to the chagrin of young Tad. In the White House, Fido was replaced by Jip, Mr. Lincoln’s dog and frequent lunch companion. The White House became home to a much wider assortment of animals, including two kittens given to the family by Secretary of State William H. Seward in August 1861 and least two goats of whom Tad was fond. In his inimitable style, Tad once scattered a group of White House visitors in the East Room by driving a goat-pulled chair through the regal room. Tad’s cries ‘Get out of the way there!’ managed to break up the Boston-bred group.2

These goats, Nanny and Nanko, were favorites of Tad’s who sometimes slept in his bed and otherwise disrupted the decorum of the White House. In a uncharacteristically lengthy telegram to Mrs. Lincoln on August 8, 1863 the President wrote of one of these goats that had evidently been staying at the Soldiers’ Home: “Tell dear Tad, poor ‘Nanny Goat,’ is lost; and Mrs Cuthbert & I are in distress about it. The day you left Nanny was found resting herself, and chewing her little cud, on the middle of Tad’s bed. But now she’s gone. The gardener kept complaining that she destroyed the flowers, till it was concluded to bring her down to the White House. This was done, and the second day she had disappeared, and has not been heard of since. This is the last we know of poor ‘Nanny.”3 Less than a year later, Mr. Lincoln had news to report in an April 28, 1864 telegram to his wife in New York: “Tell Tad the goats and father are very well — especially the goats.”4

The family goats and other pets were a point of difference between the President and his wife, according to Mrs. Lincoln’s seamstress, Elizabeth Keckley:

Mr. Lincoln was fond of pets. He had two goats that knew the sound of his voice, and when he called them they would come bounding to his side. In the warm bright days, he and Tad would sometimes play in the yard with these goats, for an hour at a time. One Saturday afternoon I went to the White House to dress Mrs. Lincoln. I had nearly completed my task when the President came in. It was a bright day, and walking to the window, he looked down into the yard, smiled, and, turning to me, asked: ‘Madam Elizabeth, you are fond of pets, are you not?’
‘O yes, sir,’ I answered.
‘Well, come here and look at my two goats. I believe they are the kindest and best goats in the world. See how they sniff the clear air, and skip and play in the sunshine. Whew? what a jump,’ he exclaimed as one of the goats made a lofty spring. ‘Madam Elizabeth, did you ever before see such an active goat?’ Musing a moment, he continued: ‘He feeds on my bounty, and jumps with joy. Do you think we could call him a bounty-jumper? But I flatter the bounty-jumper. My goat is far above him. I would rather wear his horns and hairy coat through life, than demean myself to the level of the man who plunders the national treasury in the name of patriotism. The man who enlists into the service for a consideration, and deserts the moment he receives for a consideration, and deserts the moment he receives his money but to repeat the play, is bad enough; but the men who manipulate the grand machine and who simply make the bounty-jumper their agent in an outrageous fraud are far worse. They are beneath the worms that crawl in the dark hidden places of earth.’
His lips curled with haughty scorn, and a cloud was gathering on his brow. Only a moment the shadow rested on his face. Just then both goats looked up at the window and shook their heads as if they would say, ‘How d’ye do, old friend?’
“See, Madam Elizabeth,’ exclaimed the President in a tone of enthusiasm, ‘my pets recognize me. How earnestly they look! They go again; what jolly fun!’ and he laughed outright as the goats bounded swiftly to the other side of the yard. Just then Mrs. Lincoln called out, ‘Come, Lizabeth; if I get ready to go down this evening I must finish dressing myself, or you must stop staring at those silly goats.’
Mrs. Lincoln was not fond of pets, and she could not understand how Mr. Lincoln could take so much delight in his goats. After Willie’s death, she could not bear the sight of anything he loved, not even a flower. Costly bouquets were presented to her, but she turned from them with a shudder, and either placed them in a room where she could not see them, or threw them out of the window. She gave all of Willie’s toys — everything connected with him — away, as she said she could not look upon them without thinking of her poor dead boy, and to think of him, in his white shroud and cold grave, was maddening. I never in my life saw a more peculiarly constituted woman. Search the world over, and you will not find her counterpart. After Mr. Lincoln’s death, the goats that he loved so well were given away–I believe to Mrs. Lee, nee Miss Blair, one of the few ladies with whom Mrs. Lincoln was on intimate terms in Washington.5

Pets were not the only animals given the White House. “Tad had the same weakness for unlucky brutes which his father had for unfortunate men, and always had under his protection one or more ill-conditioned curs of low degree, famished appearance and unimaginable extraction. Somehow they never stayed long, and I do not know whether or not they fattened as well as others at the ‘public crib,'” observed presidential aide.6

Jack the Turkey managed to find a way to Tad’s heart before he became food for his stomach. On Christmas Eve, 1863, President Lincoln and Tad engaged in the following dialogue: President Lincoln: “Jack was sent here to be killed and eaten for this very Christmas.” Tad replied: “I can’t help it. He’s a good turkey, and I don’t want him killed.” Noah Brooks later recorded the story: “…a live turkey had been brought home for the Christmas dinner, but ‘Tad’ interceded in behalf of its life, and carried the case up to the Executive Chamber, securing a stay of proceedings until his father could be heard from. The argument was that the turkey had as good a right to live as any body else, and his plea was admitted and turkey’s life spared.”

The soldiers on duty about the house made a pet of the bird, and on the last election day the boy came tearing up into his father’s room to call his attention to the fact that the soldiers were voting. Noticing the turkey among them, the President asked ‘Tad’ if the turkey was voting, too; to which the boy promptly responded — ‘O, no; he isn’t of age yet!’ The indulgent father thought that was reply was a great deal better than many of the so-called Lincoln stories.” 7

The President also pardoned a Zouave doll owned by Tad — also named Jack: “The Doll Jack is pardoned,” penned the President after Tad and Willie Lincoln along with Bud and Holly Taft had sentenced him to death for sleeping on guard duty. Julia Taft later wrote a version of the story that had occurred in the fall of 1861. She and John Hay unsuccessfully objected to Tad’s desire to disturb President Lincoln:

“Pardon for Jack, eh,’ said the President, smiling, but with a pretense of mock gravity. ‘You know, Tad, it’s not usual to grant pardons without some sort of hearing. You come in here and tell me why you think Jack should have a pardon.’
Major Hay, with a disgusted snort, stepped aside and we trooped after the President into his office. He sat down in his big chair, crossed one long leg over the other and put the tips of his fingers together in a judicial manner.
‘State your case, Tad,’ he said gravely.
‘Well, you see, Pa,’ said Tad, ‘most every day we try Jack for being a spy or deserter or something and then we shot him and bury him, and Julie says it spoils his clothes, and Major Watt says it digs up his flowers, and so we thought we’d get you to fix us up a pardon.’
“The President considered this argument with due gravity; then he said, with a twinkle in his eye,, ‘Yes, Tad, I think you’ve made a case. It’s a good law that no man shall twice be put in jeopardy of his life for the same offence and you’ve already shot and buried Jack a dozen times. I guess he’s entitled to a pardon.’ Turning round to his desk, he wrote something on a sheet of paper and handed it to Tad, saying, ‘There’s your pardon, Tad. And I only wish, Hay,’ he said to his secretary with a sort of sigh, ‘they were all that easy.”8

But the President’s pardon was later overruled when Jack was again tried by the youthful foursome as a “traitor and spy.” The penalty was hanging.

The President had a particular weakness for kittens. In a letter to Congressman Lincoln in 1848, Mrs. Lincoln reported that their son Robert had come “across in a yard, a kitten, your hobby.”9 During a conference with General Grant and Admiral David Porter in the early spring of 1865, the President was interrupted by the purring of three motherless kittens. Picking them up and placing this on his lap, the President said: “Poor little creatures, don’t cry; you’ll be taken care of.” Grant aide Horace Porter recalled that it was “curious sight at an army headquarters, upon the eve of a great military crisis” to watch the commander-in-chief “tenderly caressing three stray kittens. It well illustrated the kindness of the man’s disposition, and showed the childlike simplicity which was mingled with the grandeur of his nature.”10

Lewis Stanton, son of Secretary of War Edwin M. Stanton, recalled how his father and Mr. Lincoln handled one difficult situation at the Soldiers Home: “Mr. Lincoln and my father arrived at the cottage. They at once noticed the peacocks who were roosting in a small cluster of cedar trees with the ropes and sticks caught in the many small branches and recognized the dangerous and uncomfortable position when on the morrow they would attempt to fly to earth. The two men immediately went to work, solemnly going to and fro unwinding the ropes and getting them in straight lines and carefully placing the small pieces of wood where without catching they would slide off when in the morning the birds flew down.”11