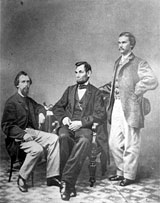 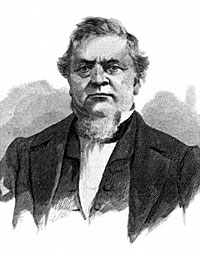 The President’s secretaries, John Hay and John Nicolay, shared a bedroom, where they occasionally received midnight visits by the President, who was a light sleeper. One night, when the President came by to report the latest military defeat, he admitted: “I believe I feel trouble in the air before it comes.”1 Sometimes, there was a comical quality to the appearance of the President, whom the secretaries described as “The Tycoon” or “The Ancient.” As John Hay recorded in his diary on May 14, 1864: “The President came in last night in his shirt & told us of the retirement of the enemy from his works at Spottsylvania & our pursuit. I complimented him on the amount of underpinning he still has left & he said he weighed 180 pds. Important if true.”2 Hay recalled that one night in July 1864 when Washington was under siege by Confederate troops, “A little after midnight R.T.L. came into my room & got into bed: saying Stanton had sent out for them all to come in [from the Soldiers’ home”3

White House historian William Seale thinks that it is in this room that President Lincoln met with John Baldwin, a representative of Virginia Unionists on April 4, 1861, in an attempt to keep Virginia in the Union. It became clear to Mr. Lincoln that Baldwin could not pledge that Virginia would remain loyal without forcing him to make unacceptable concessions. After the meeting, Mr. Lincoln ordered relief expedition for Fort Sumter, South Carolina.

The secretaries resolved early in the Lincoln Administration that they were in a unique position to write a biography of their boss and began, with the President’s approval, to collect material for the biography which would only be produced over two decades and ten volumes later. They were able to draw on a wealth of diary entries, letters and personal experiences, such as the one John Nicolay noted on April 21, 1861:

“About 1 o’clock that night a committee arrived from Baltimore desiring an interview with the President. The messenger waked me, and instead of waking the President I went to the War Department where the Secretary of War was staying to be prepared for emergencies. The mission of the Committee was if possible to induce the Government to send no more troops through Baltimore. I woke the Sec. War, who was not disposed to listen to such a proposition, and went to sleep again. I learned however from the Chief Clerk that there were no troops (to their knowledge) on the way which would reach Baltimore before eight next morning, when they could see the President with their proposal. This satisfied them for the time being and they went away.
Next morning by eight, they were with the President, or rather met him at the foot of the stairs as he was going down to speak to General [Winfield] Scott who was in his carriage at the door. [General Scott suffered from gout, and the President was trying to save him all possible pain.] They mentioned their errand to both, and General Scott promptly suggested, ‘Send them around Baltimore.’ The President agreed to the suggestion ‘if in a military point of view’ it were practicable, and gave the Committee a note saying that it was his wish, in order to avoid further present difficulty. With this they went home apparently satisfied.4

John Hay recorded on election night, November 8, 1864, the kinds of concerns that invaded their bedroom: “W.H.L. [Ward Hill Lamon] came to my room to talk over the Chief Justiceship; he goes in for Stanton & thinks, as I am inclined to think, that the President cannot afford to place an enemy in a position so momentous for good or evil. He took a glass of whiskey and then, refusing my offer of a bed, went out &, rolling himself up in his cloak, lay down at the President’s door; passing the night in that attitude of touching and dumb fidelity, with a small arsenal of pistols & bowie knives around him. In the morning he went away leaving my blankets at my door, before I or the President were awake.”5

After notifying a sleepy Robert Lincoln about the President’s assassination on April 14, 1865, Doorkeeper Tom Pendel was instructed by Robert to “Go and call Major Hay.” According to Pendel in Thirty Six Years in the White House, “I said to Hay, ‘Major, Captain Lincoln wants to see you at once. The President has been shot.’ He was a handsome young man with a bloom on his cheeks just like that of a beautiful young lady. When I told him the news, he turned deathly pale, the color entirely leaving his cheeks. He said to me, ‘Don’t allow anybody to enter the house.’ I said, “Very good, Major. Nobody shall come in.’ They took their departure for the theatre.”6