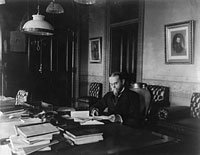 The office of John Hay, assistant secretary, was across the hall from that of the principal secretary, John Nicolay in the northeast corner of the White House. Thus, it was spared most of the traffic of those who sought to see the President in the office that adjoined Nicolay’s. As a result, according to aide William Stoddard, “To this…room, indeed, Mr. Lincoln sometimes fled for refuge from the pressure he could not escape in his own.” 1 But the President wasn’t the only Lincoln to visit. Stoddard recorded one juvenile invasion: “The northeast room has been as shabby as any, but it has assumed a suddenly disastrous look, this fine morning. The green cloth cover of the broad table was ink-stained and work-worn, last evening, but it was whole. It is by no means a unit, now. Tad and Willie Lincoln have been here, and they are the happy owners of brand-new pocket-knives. They are sharp knives, too, that will cut outline maps of the seat of war, or of anything else, upon green cloth table-covers.”2

William O. Stoddard described the office: “The northeast room was not narrow and it was long. Its south door opened into the great hall, and the Executive offices, as I have said, were over the way. In the middle of the eastern side of the room was a big fireplacewith an extensive marble mantel….My desk, in front of the door, had at its right, in front, the door into Nicolay and Hay’s bedchamber. It was a huge, flat table desk, full of capacious drawers for documents….In the far corners, by the north window, were two upright desks, old and apparently somewhat infirm, over which John Hay claimed Supervision and he now and then sat down at one of them, but most of his time had to be spent in Nicolay’s room for his peculiar abilities quickly began to manifest themselves. He was a born diplomat if ever there was one and he was a right-down good fellow.” . Lincoln’s secretaries, especially Stoddard, selected letters for the president to see. Stoddard noted: “As for stationery and the like, the economies of the Republic had refused to increase the annual appropriation since the days of John Adams, and it remained at two hundred and fifty. I had to buy for myself every pen and every sheet of anything but document paper that I used while I was in office and Nicolay and Hay had to scramble for themselves. The other expenses of the house were eked out in one way and another but they were always calling for more and not getting it, like so many Oliver Twists.”3

Nicolay wrote his fiancée in March 1861, “As the existing laws do not provide for an assistant for me, I have had John Hay appointed to a clerkship in the Department of the Interior and detailed for special service here at the White House, so that he gives me the benefit of his whole time.”4 The two assistants worked very hard, especially when one of them was away from Washington. Because Nicolay was in poor health, he took an occasional vacation. On one such occasion in August 1862, Hay wrote Nicolay: “I find I can put in twenty-four hours out of every day very easily, in the present state of affairs at the Executive Mansion. The crowd continually increases instead of diminishing.” 5 A year later, however, life was quieter and duller at the White House. Hay reported that: “We have some comfortable dinners and some quiet little orgies on whiskey and cheese in my room.”6

Although Hay had been Nicolay’s, not the President’s, choice as an assistant, his affection for his young assistant quickly grew — both for his comradeship and his discretion. Hay recorded one of the President’s impromptu visits in a diary entry on April 24, 1864: “Today, the President, loafing into my room, picked up a paper and read the Richmond Examiner’s recent attack on Jeff Davis. It amused him. “Why,” said he, “The Examiner seems [about] as fond of Jeff as the [New York] World is of me.” 7 A few days later, on April 30, 1864, Hay wrote: “A little after midnight as I was writing those last lines, the President came into the office laughing, with a volume of Hood’s works in his hand, to show Nico and me the little caricature. “An unfortunate Bee-ing,” seemingly utterly unconscious that he with his short shirt hanging above his long legs & setting out behind like the tail feathers of an enormous ostrich was infinitely funnier than anything in the book he was laughing at. What a man it is! Occupied all day with matters of vast moment, deeply anxious about the fate of the greatest army of the world, with his own fame & future hanging on the events of the passing hour, he yet has such a wealth of simple bonhommie & good fellow ship that he gets out of bed and perambulates the house in his shirt to find us that we may share with him the fun of one of poor Hoods queer little conceits.”8

Ordinary Americans also wandered in. William O. Stoddard recalled a spring afternoon when a woman whose son had just been pardoned by the President entered Hay’s office: “She seemed bewildered. Her lips were quivering. She had been weeping and was drying her eyes with her handkerchief as she approached my desk. I offered her the nearby chair. For a few moments she sat silent, struggling for control. She shuddered slightly, tried to speak, gave it up. Then suddenly she fairly cried out, ‘They told me he was homely. I think he has the most beautiful face I ever saw.'” Many inventors and vendors also wondered into White House with examples of new weapons that they wanted the Army to purchase. Many of their samples ended up in Hay’s office – filling a corner and sometimes a table. Because Stoddard was the best marksmen among the President’s assistant, Mr. Lincoln came to the office as well in search of company to test the weapons.9

Hay handled more of the personal correspondence while Nicolay handled more of the official letters. But their duties overlapped. The letters received were breath-taking in scope and sometimes breath-taking in effrontery. Stoddard noted “a host of letters that are altogether sane, but which give a curious presentation of the fact that the average American, male or female, knows almost nothing about the machinery of the National Government. Simple-minded people send their business to Father Abraham, no matter what it is, and it is the business of this desk to not neglect what they send.”10 Hay recorded in his diary on November 8, 1861 a letter to the President from Benjamin Butler, a prominent Massachusetts politician turned General:

“Gen’l Wool has resigned. Gen’l Frémont must. Gen’l Scott has retired.
I have an ambition, and I trust a laudable one, to be Major-General of the United States Army.
Has anybody done more to deserve it? No one will do more. May I rely upon you, as you may have confidence in me, to take this matter into consideration?
I will not disgrace the position. I may fail in its duties.
P.S. I have made the same suggestion to other of my friends.11

Stoddard, who worked in Hay’s office, spent much of his time throwing out letters which had been sent for the President’s attention. “After a proper examination, almost all business letters were promptly referred to the special office, war, navy &c., to which their matter related; another large class – indeed, the largest, as a general thing – went into my willow waste-basket, a few were filed in the office for future reference, and a small percentage, three or four in a hundred, properly briefed and remarked upon were laid on the President’s desk. This, though exciting the furious wrath of sundry unthinking people, was unavoidable; for if every day had been a month it would have been impossible for Mr. Lincoln to attend to all these things in person.”12 Stoddard wrote the mail “related to all imaginable interests and affairs: applicants for office, for contracts, for pardons, for pecuniary aid, for advice, for information, for autographs, voluminous letters of advice, political disquisitions, religious exhortations, the rant and drivel of insanity, bitter abuse, foul obscenity, slanderous charges against public men, police and war information, military reports – there never was on earth such another ominium gatherum as the President’s mail.”13

The President’s secretaries did not keep normal office hours — any more than the President himself did. They were on call for work or entertainment around the clock — although the single Hay found more time for a Washington social life than the engaged Nicolay did. In his diary entry of June 17, 1864, John Hay recorded the kind of duties to which the President entrusted him: “Thursday night, June 9, the President came into my room just before bed-time and said that [General William] Rosecrans had been sending despatches requesting that an officer of his staff might be sent to Washington to lay before the Prest matters of great importance in regard to a conspiracy to overthrow the government. He asked for this permission on account of the outrage committed upon Major Bond of his Staff who was some time ago court martialed for coming to Washington under General Rosecrans’ orders. Recently Gov. [Richard] Yates has joined in Rosecrans’ request, asking that Sanderson shall be sent for. “If it is a matter of such overwhelming importance,” said the President, “I don’t think Sanderson is the proper person to whom to entrust it. I am inclined to think that the object of the General is to force me into this conflict with the Secretary of War and to make me overrule him in this matter. This at present I am not inclined to do. I have concluded to send you out there to talk it over with Rosecrans and to ascertain just what he has. I would like you to start tomorrow. He gave me, in the morning, before I was out of bed, this note to deliver to Rosecrans.”