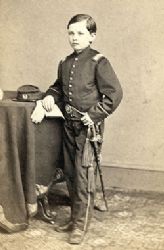 Relatively little is known about the bedroom of Abraham Lincoln’s youngest son. It was tucked into the northwest corner of the second floor next to the main stairway to the second floor and accessible only from the Prince of Wales bedroom where his brother Willie had died. With all four floors of the White House, its stables and conservatory as his private playground, there was no particular reason for Tad to be confined to his room when there were soldiers and service elsewhere who would obey his commands. What Noah Brooks called his “irrepressible spirit of fun and mischief” could hardly be contained by the four walls of one of the White House’s smallest rooms. 1

Tad was known to fall asleep on the floor of his father’s office and sometimes sleep in his father’s bedroom in a small trundle bed – so even sleep did not assure that he would return to his own bedroom though his father sometimes carried him there after he fallen asleep. Journalist Brooks noted: “His father took great interest in everything that concerned Tad, and when the long day’s work was done, and the little chap had related to the President all that had moved him or had take up his attention during the daylight hours, and had finally fallen asleep under a drowsy cross-examination, the weary father would turn once more to his desk, and work on into the night, for his cares never ended. Then, shouldering the sleeping child, the man for whom millions of good men and women nightly prayed took his way through the silent corridors and passage to his boy’s bedchamber.” 2

A year later, Tad himself must have implored his parents to change his room. First Tad’s father wrote his mother: “Mother – Please put something now in Tad’s room. She then wrote underneath: “President Mrs. Lincoln & Secy. Usher want Tad’s room fixed.” Then Secretary of the Interior ordered the Commissioner of Buildings, Benjamin Brown French: “Will Mr. French please fix up the room of Master Tad Lincoln as he desires if it can properly be done.” To which, French wrote: “Ordered Mr. Haliday to fix it.” He added: “Wrote Mr. Haliday to do the work Tad wanted and I would see it paid for.” 3 Another note added: “Please give Tad a board & some plank.” One would need an imagination as active as Tad’s to decode exactly what he wanted.

On the night President Lincoln was assassinated, the distraught Tad did not sleep in his own bed. Instead, he asked to sleep in his father’s bed across the hall. White House staffer Thomas Pendel lay down next to Tad until he fell asleep. Pendel noted: “That was a sad night for the nation, and to me it was simply awful.” 4