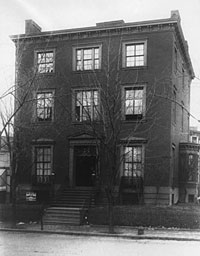 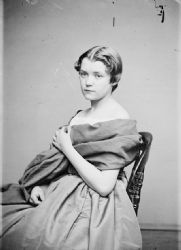 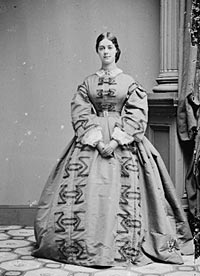 The home of Secretary of the Treasury Salmon P. Chase was a three-story brick townhouse at the corner of E and Sixth Streets. At the outset of the war, Chase rented the building for $100 a month and later bought it from the estate of Silas Holman Hill, a businessman and Know-Nothing politician who had passed away in 1860. Historian Doris Kearns Goodwin wrote that “when the furnishing costs were added on, Chase found himself in debt. Unable to sell off his Cincinnati and Columbus properties in the depressed real estate market that prevailed in Ohio, he was forced to borrow $10,000 from his old friend Hiram Barney. It must have been painfully awkward for the straitlaced model of probity to request the loan, particularly since Barney, as collector of customs in New York, was technically his subordinate.”1

Like Secretary of War Edwin M. Stanton, Chase had difficulty living on his cabinet salary of $8000 — an increase from $1800 as governor of Ohio but insufficient in view of the needs and tastes of Kate and Nettie. Chase biographer Albert Bushnell Hart wrote: “The errors in Chase’s finance were, then, due partly to inexperience, partly to want of apprehension of the tremendous task thrust upon him, and partly to the hurry and rush of a desperate time…However much he groaned over the difficulties of his place, he met those difficulties firmly day by day, and he did not deceive or cajole. Nor did he protect dishonest men; his immediate subordinates were trustworthy and efficient, and justified his confidence; indeed, the average character of the treasury official was higher than in any other department of the public service except perhaps the Navy.”2

Later, Chase’s son-in-law, Rhode Island Senator William Sprague, bought the house for $32,000. Sprague and Chase’s daughter Kate shared the house with Chase and his other daughter Nettie. The house was one of the social and political centers of Washington because whatever Chase lacked in charisma, he made up for in ambition.

On September 23, 1862, the night after the draft Emancipation Proclamation had been issued, a party was held at the Chase home, attended by Cabinet members and diplomats. John Hay recorded: “They all seemed to feel a sort of new and exhilarated life; they breathed freer; the President’s Proclamation had freed them as well as the slaves. They gleefully and merrily called each other and themselves abolitionists, and seemed to enjoy the novel accusation of appropriating that horrible name.”3 General James A. Garfield, himself a future President, stayed here when he was between army assignments in 1862.

Kate held receptions on Wednesdays — and sometimes appeared to be in a spending and social contest with Mrs. Lincoln. The home was the site of one of the war’s most glittering social events — Kate’s marriage to Sprague on November 12, 1863. The President came but his wife pleaded illness so he stayed longer than expected in order to make up for Mary’s disdain for Kate. Journalist Noah Brooks wrote of the wedding: “The whirl of dust of the bridal cortege, which went from secretary Chase’s to the railroad depot last night, has subsided — but not so the gentle flow and ebb of small talk which so grand an event as the marriage of Senator Sprague and Miss Kate Chase has created. Who was there and who was not there; how the bride looked in her white velvet dress, real point lace veil and orange flowers; how the President went in solitary state and a white cravat and things; how Mrs. Lincoln did not go because she is yet in black wear and had an opportune chill betimes; how the President stayed two hours and a half ‘to take the cuss off’ the meagerness of the Presidential party…”4

Outwardly, the Spragues were one of the capital’s premier couples. Secretary of the Navy Welles recorded in his diary on May 19, 1863: “Governor Sprague and Miss Kate Chase called this evening. I have been skeptical as to a match, but this means something. She is beautiful, or, more properly perhaps, interesting and impressive. He is rich and holds the position of Senator. Few young men have such advantages as he, and Miss Kate has talents and ambitions sufficient for both.”5

Their wedding on November 12, 1863 was the occasion for the debut of the “Kate Chase Wedding March” and for the gathering of wartime Washington society. It was a happy match for the ambitious and extravagant Kate but not a happy marriage. Her renovations on the house before the marriage put her father deeply in debt. The wedding itself cost $4000. After the marriage, she spent much of her time in Rhode Island, renovating the Sprague mansion there. Eventually, the marriage dissolved in acrimony and marital indiscretions by both parties.

The Chase home, like those of other Cabinet secretaries, was open for “Cabinet calling” on Mondays in the middle of the day. Historian Doris Kearns Goodwin wrote: “While Kate hosted the weekly cabinet receptions with elegance and grace, she devoted her greatest efforts to the celebrated candlelight dinners she held each Wednesday evening. With exacting care, she drew up the guest lists, prepared the menus, and arranged the seating. With her father occupying the head of the table, she would help maintain lively, entertaining conversation from her place at the other end.”6

The Chase home was too far from the White House, however, for President Lincoln to conveniently walk there at night. Chase biographer Albert Bushnell Hart wrote: “When Chase came to Washington, he expected a more intimate friendship with the President than he ever gained; in after years he felt that perhaps he had made a mistake in choosing a house more than a mile from the White House; for Seward, he thought, lived so near by that he had an opportunity to know Lincoln in an informal good fellowship which was denied to him. But the real cause that kept Lincoln and Chase from coming close together lay much deeper than a separation by a few furlongs. While kindly, genial, and agreeable among his friends, Chase had the misfortune to lack a sense of humor; and a Puritan conception of the gravity and seriousness of his work kept him from really understanding the easier and less strenuous attitude of the born Kentuckian.”7