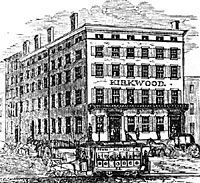 Kirkwood House was a five-story hotel on Pennsylvania Avenue at 12th Street. Kirkwood House claimed in 1865 that “it has been throughly renovated and repaired and contains all the requisites of a first-class hotel, is centrally located, and convenient to the business portion of the city and public buildings, city railways &c.”1

Vice President Andrew Johnson stayed here and was supposed to have been assassinated here on April 14, 1865. Instead, he was awakened to be told of Lincoln’s assassination the next morning and later took the oath of office as President here. Johnson’s room was a two-room suite on the second floor of the hotel. According to Johnson biographer Hans Trefousse, “Johnson had gone to bed early that night. Shortly after 10:15 he was awakened by a loud knock at the door. When he did not respond immediately, his fellow boarder at the Kirkwood House, former governor Leonard J. Farwell of Wisconsin, called in a loud voice, ‘Governor Johnson, if you are in this room I must see you.’ The vice president sprang out of bed. ‘Farwell, is that you?’ he replied. ‘Yes, let me in,’ was the answer. The door opened, and Farwell, who had just come from Ford’s Theater, excitedly told Johnson the news. The president had been shot. The vice president, stunner, grasped Farwell’s hands, and the two men fell upon each other, holding on for mutual support. Soon there were guards outside to prevent any attempt to murder Johnson.”2 Johnson returned to the hotel after briefly visiting Mr. Lincoln’s bedside at the Peterson House across from Ford’s Theater. Shortly before Johnson himself died, he recalled how he spent the night walking around his hotel room, thinking about the policies he would have to follow as President so that future historians would say “He pursued the right course.”3

The day after the assassination, the oath was administered by Chief Justice Salmon Chase in the presence of Attorney General James Speed, Treasury Secretary Hugh McCulloch, former Senator John Hale, former Postmaster General Montgomery Blair, and Blair’s father, Frank Blair, Sr. After the oath was taken, Chase told Johnson: “You are President. May God support, guide, and bless you in your arduous duties.”4

Later, Senator Benjamin Wade and Congressman Henry Winter Davis visited Johnson at Kirkwood House. “Mr. Johnson, I thank God that you are here. Lincoln had too much of the milk of human kindness to deal with these damned rebels. Now they will be dealt with according to their deserts,” Wade told the new President.5 Ironically, the two Radical Republicans became strong opponents of Johnson.