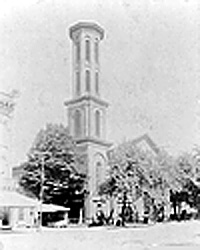 Fourth Presbysterian Church was the preferred church of President Lincoln’s two youngest sons. According to Julia Taft, “The President and Mrs. Lincoln attended the New York Avenue Presbyterian Church, but it was not long before Willie and Tad formed the habit of going with us to the Fourth Presbyterian, of which Doctor J. C. Smith was pastor. Many in our church were in sympathy with the secessionists, and when Doctor Smith prayed for the President of the United States they would express their disapproval by rising and leaving the church, banging their pew doors and the outside door on their way out. This went on for several weeks until one Sunday a slim young lieutenant appeared with a file of soldiers. When the hour for service arrived the lieutenant marched to the front of the church, wheeled, and in a crisp, military tone, announced:

‘It is the order of the Provost Marshal that any one disturbing this service or leaving it before ti is out will be arrested and taken to the guardhouse.’
“It seemed to me that Doctor Smith prayed rather longer and more fervently than usual that day for the President but there was no disturbance on the part of secessionists. Tad Lincoln was frankly disappointed. The indignant exodus of the secessionists with their banging of pew doors had been a welcome respite in the long prayer. He had more than once remarked, ‘I don’t see why preachers always pray so long for Pa.’ After the service he expressed his scorn of the ‘Secesshes,’ as he called them, for not accepting the lieutenant’s challenge.
‘If I was Secesh,’ said Tad, ‘I wouldn’t let him stop me banging pew doors.’
Yes,’ answered Willie, ‘and get put in the guardhouse.’
‘Well, I guess Pa could get me out,’ was Tad’s answer.
I remember that Sunday, as Tad sat on the floor of the pew, as he usually did amusing himself with whatever he had in his pocket, a young officer, who was with us, gave him his knife, thinking Tad could not open it. But he did and cut his finger and I had to bind it up with my best embroidered handkerchief. ‘I will never take you to church again, Thomas Lincoln.’2

On another occasion, Mr. Lincoln peered over his reading glasses and asked Julia, “Why do our boys like to go to your church?” Mrs. Lincoln added: “They won’t go to Doctor Gurley’s unless Bud and Holly go too.” When Julia said Fourth Presbyterian was livelier, Mrs. Lincoln asked Willie his opinion. Willie explained about the door-banging and the provost martial – leading Tad to ask his father why preachers insisted on praying “so long for you, Pa?” Julia reported that the smile left Mr. Lincoln’s face as he replied: “Well, Tad, I supposed it’s because the preachers think I need it and, I guess I do.” The President then left the Family Library and went to his office.3