Hotels and Other Public Buildings: The National Hotel 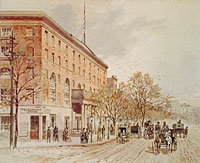 The National Hotel was the primary competitor to the Willard. It was located at the corner of Pennsylvania Avenue and 6th Street, several blocks from the White House. During the 1830s and 1840s, the hotel was called Gadsby’s and was top hotel in the city. The National’s predominantly southern patronage had been affected by an outbreak of intestinal illness during President Buchanan’s inauguration; several persons died from the outbreak which Southerners attributed to a Republican plot to wipe out Democrats. Anthony Pitch wrote that “even though patronized by many celebrities, it did not have a spotless reputation. The wife of one general had stormed out in disgust, complaining that she was not rugged enough to endure the sickening filth.”1

The National had been a rallying point for Douglas Democrats on the way to the 1860 Democratic National Convention in Charleston, South Carolina.

Actor John Wilkes Booth customarily stayed at the National when in Washington. Carl Sandburg wrote: “Most of the time until April 15, 1865, Booth lived in Washington, checking in and out of his National Hotel quarters, taking many trips on errands whose purpose he kept secret. He studied Lincoln’s ways and habits, particularly as a theatregoer.”2 In 1865 it was at the National where Booth was lodged in the days before he assassinated President Lincoln on April 14. Ironically, a month earlier on March 17, 1865, the President had visited the hotel where he spoke to the 140th Indiana Regiment from the balcony and presented a captured Confederate flag to Governor Oliver Morton of Indiana. He warned his audience that he would say only a few words:

I was born in Kentucky, raised in Indiana, reside in Illinois, and now here, it is my duty to care equally for the good people of all the States. I am to-day glad of seeing it in the power of an Indiana regiment to present this captured flag to the good governor of their State. And yet I would not wish to compliment Indiana above other states, remembering that all have done so well. There are but few aspects of this great war on which I have not already expressed my views by speaking or writing. There is one–the recent effort of our erring brethern, sometimes so-called, to employ the slaves in their armies. The great question with them has been; “will the negro fight for them?” They ought to know better than we; and doubtless, do know better than we. I may incidentally remark, however, that having, in my life, heard many arguments,–or strings of words meant to pass for arguments,–intended to show that the negro ought to be a slave, that if he shall now really fight to keep himself a salve, it will be a far better argument why [he] should remain a slave than I have ever before heard. He, perhaps, ought to be a slave, if he desires it ardently enough to fight for it. Or, if one out of four will, for his own freedom, fight to keep the other three in slavery, he ought to be a slave for his selfish meanness. I have always thought that all men should be free; but if any should be slaves it should be first those who desire it for themselves, and secondly those who desire it for others. Whenever [I] hear any one, arguing for slavery I feel a strong impulse to see it tried on him personally.
There is one thing about the negroes fighting for the rebels which we can know as well [as] they can; and that is that they can not, at {the] same time fight in their armies, and stay at home and make bread for them. And this being known and remembered we can have but little concern whether they become soldiers or not. I am rather in favor of the measure; and would at any time if I could, have loaned them a vote to carry it. We have to reach the bottom of the insurgent resources; and that they employ, or seriously think of employing, the slaves as soldiers, gives us glimpses of the bottom. Therefore I am glad of what we learn on this subject.3

According to Stanley Kimmel, author of Mr. Lincoln’s Washington, “As Lincoln left the balcony, there were more cheers, and music by the band. To many present, he still appeared to be in ill-health, and after receiving the greetings of a few personal friends in the parlor of the hotel, he returned to the White House. It was upon this occasion that Wilkes Booth, then living at the hotel, mingled in the crowd swarming about Lincoln’s carriage, and watched him with such a demoniacal expression that his hatred of the President was noticed by those standing nearby. It was also while Lincoln was speaking that a girl named Lizzy Murty, who resided there and was known as the genuine Secesh,’ tried to spit upon his head. Not until Lincoln was dead were the facts known and the girl take into custody.” 4