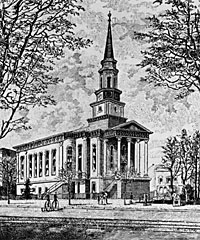 At the corner of New York Avenue and Thirteenth Street was the church, less than four blocks from the White House, where President Lincoln normally worshiped. (The existing church is a replacement for the one that existed during the Civil War.) It was a relatively new building, having only been built the previous year. The President apparently attended for the first time on April 14, 1861 – the same day that Fort Sumter in Charleston, South Carolina was forced to surrender. Fortunately for the Lincolns, the congregation of the church was reliably pro-Union. The two younger Lincoln boys, Willie and Tad, were enrolled in the church’s Sunday School but Tad preferred to attend Fourth Presbyterian Church with the Taft boys and their sister Julia.

Although Mr. Lilncoln never officially joined the congregation, the Lincolns did have their own family pew which they reserved on June 1, 1861, paying $50 a year in rent for a pew eight rows from the front. According to William Henry Roberts, Stated Clerk of the Presbyterian General Assembly, observed: “I was seated not far from Mr. Lincoln at Sunday services for a year and a half, and his attitude was always that of an earnest and devout worshiper.”1

The pews provided little room for the President’s long legs. Mr. Lincoln exercised his presidential privilege to stand during services when he so desired (while others were seated) — particularly during prayers. In order to assure his privacy when he attended Wednesday night prayer services on the lower level, President Lincoln usually stayed in the pastor’s study where he could listen but not be heard.

The President attended his first service with his family on the Sunday after his inauguration in March 1861. Elizabeth Todd Grimsley recalled that after of the First Battle of Bull Run in July 1861, “that beautiful moonlit Sabbath evening there was a wedding in Dr. Gurley’s church. His daughter was married to a young army officer, amid flowers, music and light. They left the church together, and then separated in the course of an hour – she to wait in her father’s house the results of the war, he to join his regiment on the battle-field. The streets echoed the clattering hoofs of hurrying cavalry, regiments marched to and fro, bayonets glistening in the moonlight, and the heavy sound of rolling army wagons dispatched for the wounded soldiers, and army baggage, were the sights and sounds we heard and met as we went home from that sad church wedding.””2 Other Administration officials and friends who attended the church included Attorney General Edward Bates and Senator Orville H. Browning.

The Rev. Dr. Phineas Gurley became a friend of the President’s and conducted the funeral for Willie Lincoln on February 24, 1862. Two months later, an Illinois friend wrote: “This morning we went to Mr. [Gurley’s] church and had the honor of sitting just behind Mr. & Mrs. President. He evidently got very tired – and she was so hid behind an immense black veil – and very deep black flounces – that one could scarcely tell she was there.”3 William Stoddard wrote that Mary Todd Lincoln “attended morning service pretty regularly; and, frequently, when affairs of state permitted, Mr. Lincoln accompanied her. He was not a man to pay much attention to or care much about the thin walls of separation between different denominations.'”4 Dr. Gurley also led prayers at the President’s bedside when he was assassinated on April 14, 1865 and later delivered a eulogy at his funeral. Journalist Noah Brooks recalled a November 1862 church service:

Last Sunday [November 30] I saw the President and his wife at church at Dr. Gurley’s (Presbyterian),where they habitually attend. The building was crowded, as usual, with dignitaries of various grades, besides sinners of lesser note and rank. Conspicuous among them all, as the crowd pour out of the aisles, was the tall form of the Father of the Faithful, who is instantly recognized by his likeness to the variety of his published likenesses. The President and his wife are both in deep mourning for their son, who died last Spring, and his Excellency has grievously altered from the happy-faced Springfield lawyer of 1856, whom I then met on the stump in Illinois for Frémont. His hair is grizzled, his gait more stooping, his countenance sallow, and there is a sunken, deathly look about the large, cavernous eyes, which is saddening to those who see there the marks of care and anxiety, such as no President of the United States has ever before known. It is a lesson for human ambition to look upon that anxious and careworn face, prematurely aged by public labors and private griefs, and to remember that with the fleetingly glory of his term of office have come responsibilities which make his life one long series of harassing care, and, while compelling him to save himself and his country from disgrace and reprobation, mark him with the daily scars of mental anxiety and struggle. Whatever may be said of Abraham Lincoln by friend or foe, no one can ever question the pure patriotism and the unblenching honesty of the man. He inspires that feeling by his personal presence as much as by his acts, and as he moves down the church aisle, recognizing, with a cheerful nod, his friends on either side, his homely face lighted with a smile, there is an involuntary expression of respect on every face, and men, who would scorn to ‘toady’ to any President, look with commisserating admiration on that tall, mourning figure which embodies Abraham Lincoln, whom may God bless.”5

The Rev. William Henry Roberts recalled: “As a member of the New York Avenue Church I was seated not far from Mr. Lincoln at Sunday services for a year and a half, and his attitude was always that of an earnest and devout worshiper. He was also an attendant at the weekly meeting, though for a considerable period taking part in the services privately. It having become know that he was an attendant at the prayer meeting, many persons would gather in or near the church at the close the service in order to have access to him for various purposes. Desiring to put an end to these unwelcome interruptions, the Rev. Dr. Phineas D. Gurley, the pastor of Mr. Lincoln, arranged to have the President sit in the pastor’s room, the door of which opened upon the lecture room, and there Mr. Lincoln would take a silent part in the service. He informed his pastor on several occasions that he had received great comfort from the meetings, and for the reason that they had been characterized more by prayer than making of addresses.”6

Journalist Noah Brooks reported that on the EasterSunday after Lincoln’s murder: “This has been a gloomy day in Washington, and it has been remarked that the churches were never as full as on this day. When all hearts were naturally softened by this great national grief and turned toward the Head of Nations over us all, with His inscrutable providences. At the New York Avenue Presbyterian Church, where the President was a regular attendant, the services were peculiarly impressive. The church was draped in mourning, and the well-known pew of the Lincoln family, vacant and robed in sable crape, spoke mutely to the great congregation of him that was gone. The dirge-like music, the earnest prayer and the solemn lesson inculcated by the preacher, all made the service on which will be long remembered by those who heard it. In all of the churches some reference was made to the afflictive event, and everywhere one could see that the sadness of the people was something more than that of a passing hour.”7